Release date: 2006 By: Wouter van de Kamp This young Dutch poprockband was founded in September 2006. Meanwhile they won Taaipop 2007 and they released their selftitled EP in June 2007. After that, they played, not quite without merit, on the Uitmarkt (Amsterdam) and the Pepperfestival (Hoorn). But now to their music.

Date: 21,22-07-2007, Arrow Blues Festival 2007 By: Elvira Visser I went to see Ian Parker not because I heard his music but because I read in the paper that he got an award for best performer at this blues festival last year. So something you should see. After putting his gear on stage I was […]

Location: Cologne (Germany) By: Nina Mende This year’s Amphi Festival’s line-up was quite industrial, but still great. Unfortunately I could only be there on Sunday, maybe next year I’ll be there both days again and maybe take pictures and do some interviews. The weather was pretty good for a festival. It only rained a little […]

Lines of Leaving – Battle of Humanity

Release date: 20-07-2007, Label: Independent Sounds Oy By: Nina Mende The Finnish band “Lines of Leaving” was formed in the end of 2003. The members decided to create a band that would feed its musical hunger from wretchedness and distress of the world and the crimes against humanity. The band doesn’t fit easily into just […]

Andreas Lantz  By: Sabine van Gameren Seven Circles is a metal/goth/rock band from Sweden. With influences from My Dying Bride, H.I.M and Paradise Lost This band tries to get started in the big world of music.

Release date: 29-05-2007, Label: The End Records By: Wouter van de Kamp   Now with their third release Sleepytime Gorilla Museum has all the ingredients   ready to conquer Europe. After their first European performance on Headway Festival   this year, followed by a European tour, there is no way out for the addicts   […]

Location Valkhoff Nijmegen By: Wouter van de Kamp After a little search we found the correct stage. Tonight there were to be three bands and the first band hadn’t started yet. The weather was good so we decided to settle in the grass. Bringing your own beer was allowed and since the tapbeer was quite […] 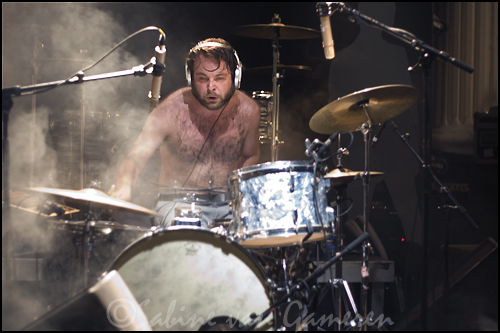 Supports: Melomanics, Aux Raus; venue: Bibelot By: Sabine van Gameren The Melomanics recently released their latest album “The Grey Light”.   Before this, they were known of their red suits which they worn every gig. With the new album, a change of style appeared. I think I kind of spoiled the surprise by telling the albums […]

Release date: december 2006, By: Wouter van de Kamp This young quintet from the capital city of Holland sent me their promo for review. Having been support act of Delain and having played the Summer Darkness festival and being able to do a releaseparty in Melkweg (Amsterdam) they have achieved quite somewhat in their young […]