Wednesday night, and we are here at the Batschkapp. Sold out house tonight! Even though it is the middle of the week. The venue was packed up to the last spot. Getting from A to B was almost impossible. So the only choice you had, was to stay were you were. Why? Well, because Flogging Molly was playing here tonight. 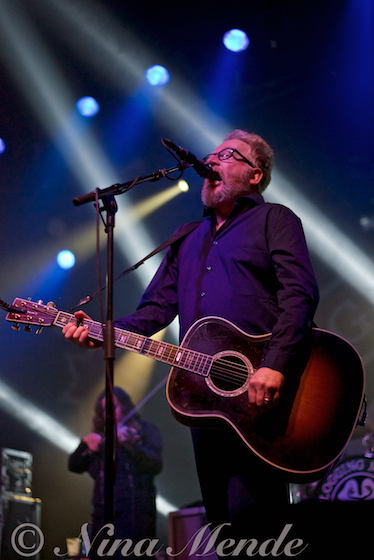 Flogging Molly is an Irish-American seven-piece Celtic punk band from Los Angeles, California and led by Irish vocalist Dave King, formerly of the hard rock band Fastway. They are signed to their own record label, Borstal Beat Records.

Now, the guys went on stage at 10pm. The audience was all ready to rock and had some beer in their system already. So the perfect mood for the party that was about to start, Then, finally, Flogging Molly was entering the stage. Everyone was cheering and eager to rock out to the music.

The band started right away playing their catchy rock music. Each band member was moving around to their music. Not standing still for a second. You could tell how passionate they were about their music. Flogging Molly was playing old and new songs. The audience could sing along to all of them. And they sure did. The cheering after each song was immense. Between a few songs, the singer was passing out some cans of Guiness to their fans. They appreciated it big time.

The band played for about two hours. It was an amazing show. Everyone was soaked in sweat afterwards and had a great time. Flogging Molly is always a pleasure to see live.