[schema type=”person” name=”Fernanda – Nervosa” description=”By: Sandra Nunes” ]To celebrate this day, International Women Day, Sandra has decided to go back a few months (24th September 2016, when Nervosa was on tour with Enforcer, Flotsam and Jetsam and Destruction, whose reports you can read here (link= https://tempelores.com/?p=15626)). Let’s relive this interview because the metal world is not only made for men but also for women and here is a brave woman: Nervosa vocalist and bassist, Fernanda Lira, who shared her thoughts and her visions about women in metal.

Sandra – How is the tour going? Can you tell us about the reactions to the new album “Agony” and the concerts?
Fernanda – It’s better to start with the album, we are surprised for having a positive feedback from all over the world, when we want an album released, we have to give everything to take it to another level, we are having good feedback not only from reviews but also from the general public who are speaking well of the album and giving it a good rating, but also the quality is better and in the shows, there are many people singing our songs, asking us to play this or that theme, because we are already selling many records.

We are on our third album “Agony” tour, which was released in June and this month we started in Europe, in July / August we played in the USA (East Coast) and Canada, and now we are back in Europe but in very good company, with Enforcer, Flotsam & Jetsam and Destruction, and it has been wonderful. We have already done other smaller tours, but this is the biggest and the first with headliners, on a tour bus, traveling with giant bands like Destruction, because they are one of the main influences of Nervosa and it has been a dream. By the way, I usually say that I’m living a dream because Schmier (Destruction) wrote us that he likes the band and invited us to go on a tour with Destruction and then he trusted us to play with them. And I still cannot believe I’m living this dream. 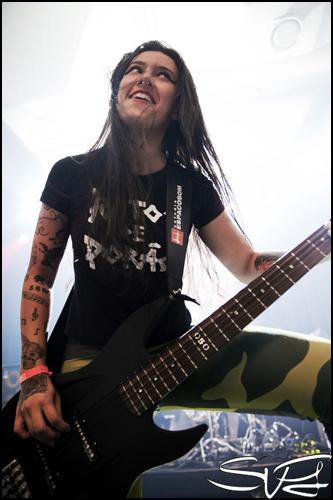 S – How did the idea of creating a band start and why did you choose Nervosa as the name of the band?
F – We wanted a short, small and easy name to memorize, such as Sepultura, as you certainly know, easy to pronounce everywhere, that was aggressive without being a name for boys. It has more fun to be a girl’s name, so nervous and furious (laughs).

Putting together all these factors, it was defined as we wanted, because I always played in female bands and I have always been a supporter of women in the metal scene, because I like Warlock, with Doro Pesch, Holy Moses, Nightwish. And I always thought that when I wanted to have a band, it would have to be with women, not as a way to create a women’s club, but as a way of influencing the entry of women into the metal scene, especially where they want to be and make them more confident, to believe in themselves because it’s complicated to be a woman due to prejudice, especially in Brazil, where there’s a lot of prejudice and chauvinism, the idea is to make women feel more confident. Why should there be bands made exclusively of men and not a band made only of women?

S – Exactly, we also have to prevail in this battle camp. What was the inspiration that led you to write two powerful albums like “Victim of Yourself” and “Agony”?
F – Thank you, we usually compose and play music that we would like to hear, so I like thrash / death metal bands more (especially from the 80’s, the old school) and for example, our lead songwriter and guitarist, Prika, also shares the same tastes as I and therefore we like to play the sound that inspires us.

S – What is your process of composing for the themes of this new album?
F – We don’t set rules, we do everything the way we want it, we let things flow naturally, I appear with a riff, Prika improves it, puts in some new ideas and then we fit the drums in, all very natural.

S – How did the label of female thrash metal come about and who decided to introduce it to the band?
F – Actually, I’m used to it, it’s something that came naturally, because I don’t care, so I have a thrash metal band that is all about women, we do what we like and we take pride in what we do. And that type of label is used by people just to describe that we are a band of women, but in fact, there’s nothing new in the metal scene because everything that is done now was already done, it’s another way to bring something different just because we are women, I do not even care because we will not be comparing how many female bands are there and how many male bands are there, although female bands are few and the most important thing is we are proud of what we are doing, and we have to introduce our band for what it brings something new , which makes it different. 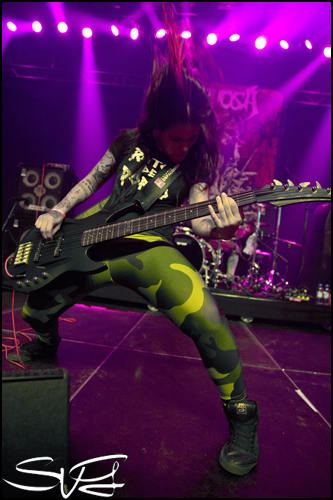 S – Is metal liberating or conservative, in your opinion?
F – I think a little bit of both, not only for women, I don’t know what it’s like in other places, but at least in Brazil, which is a very difficult society, and metal is liberating in the sense of being able to talk about your problems and you have freedom in your music to be able to talk about the government, to complain about everything that happens around and at that point, metal is very liberating.

You have that freedom of expression and people can speak whatever they want in metal. But at the same time I think it’s a bit conservative, because although metalheads are quiet, I see that there is still prejudice about the fact of women playing in bands, gay members in bands, religious bands, so I think metal is conservative in some ways, it’s a mixture of the two nowadays, as much as I would like it to be liberating, but I think it’s more liberating because there are many people who see in metal an escape valve, a form of expression, a best friend, so it is more liberating than conservative.

S – So how are you treated by the media in general?
F – With a lot of respect, although at the beginning, I was a bit worried about objectification as it has happened with several other bands of girls in metal, kind of “ah it’s sexy and attractive and such,” but I think that doesn’t happen to us because every woman should appear on stage, dressed the way she wants, but we as people, we appear dressed in t-shirts, shorts and slippers, we don’t wear anything that helps people focus on this sexy thing, like necklines or so, that’s not a part of our personality, we even prefer to wear t-shirts and this helps not to appeal to this sexual factor, about our beauty and our body.

But overall, we are well respected, and people focus more on music and that’s what interests us, although we have already been featured in articles from various magazines, such as Japanese Burrrn, Metal Hammer, Guitar Player, RockHard, and always related to music, although, people refer to beauty occasionally.

S – This one goes out for my friend, Gracielle, that has read on the Roadie Crew (Brazilian magazine) a special report about Women in Metal, and you are featured on the cover, there are some questions that are disturbing for the ones that think about feminism in the metal scene.
For example, the framing with flowers, looking like stationery to quote something that looks more futile, or even an editorial in which the editor refers to women who ”illuminate and embellish the heavy music scene”. What do you think about it?

F – That’s an interesting question; I have noticed those flower details. In fact, it’s a bit difficult, I understand, yes, women in metal usually turn up on stage let’s say so, but I have nothing to embellish, I become aggressive, so I think women are delicate, it’s a distinctive feature of women, a feminine characteristic, I think sometimes some magazines have some subjects with a way to attack our femininity, using flowers, although it’s unnecessary. I like flowers, but I don’t want to be represented by flowers, it doesn’t suit my personality, for example, you will not use flowers to illustrate an article about Angela Gossow.

But I think the fact that there are women in the metal scene is still something very new, so that people are still adapting because it’s difficult to accept this fact and it’s a necessary mistake to reach a place of equality, recognition In a magazine talking about us and not our beauty and our body and not using flowers to illustrate it, we will get there and because it’s still something very new, guys make some mistakes and want to please us, thinking that we are very feminine, then it’s a necessary mistake that makes us learn to come to an equal form of recognition, it’s part of the process, renewal in metal, now that there are many women and they are already learning to deal with it and I can’t wait to be treated as a person, not an object, without flowers. But this is already gradually changing.

S – Thank you very much. Do you have a message for Portuguese fans?
F – First, thank you for the work, I love to see women working on the tour, thank you for the highlight, for the opportunity, the bands need support, we like to know what people think and who these people are, keep on supporting and respecting us, because all of us, bands, promoters and tour managers, we are working hard to keep the flag of metal very high! \m/ 🙂 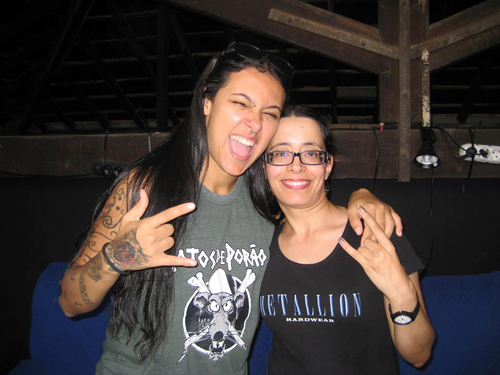