[schema type=”event” evtype=”Event” name=”28-09-2016 Europe Under Attack Tour ” description=”By Sandra Nunes” street=”RCA Club ” city=”Lisbon” country=”PT” ]Can you imagine a night of full devastation caused by four great thrash metal bands from different parts of the world? Oh yes, this threat (in a good sense!) called “Europe Under Attack” arrived and invaded various cities of Europe, including Lisbon, Portugal, where I could witness such invasion.

This brilliant tour package composed by the support acts Nervosa, Enforcer, Flotsam & Jetsam and by the headliners Destruction stopped in Lisbon last 28th September at the small venue RCA Club, to conquer more defenders of the thrash metal cause, leaving a trail of destruction. 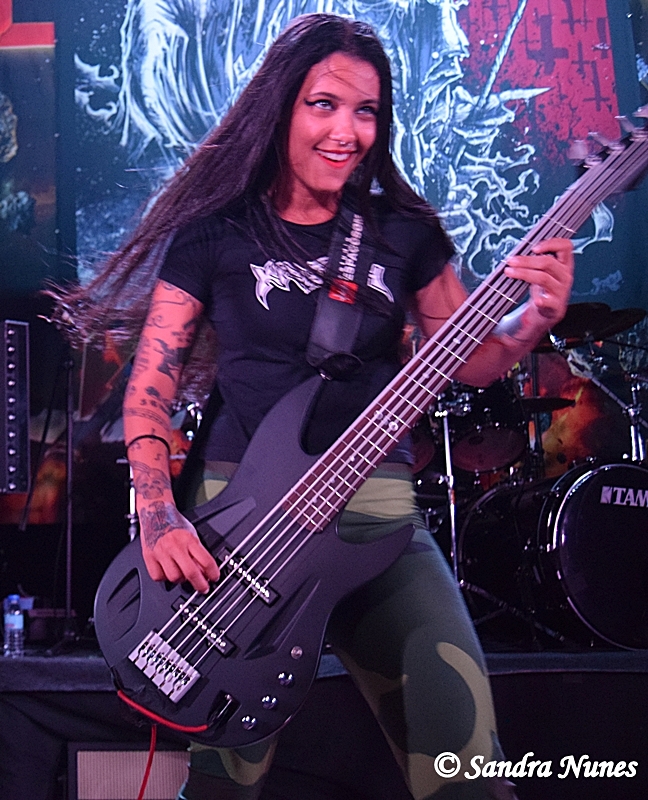 The first band to enter the stage was the new sensation of female thrash metal hailing from Brazil known as Nervosa, and is currently formed by Fernanda Lira (vocals, bass) – with whom I had the pleasure of doing an interview – and Prika Amaral (backing vocals and guitars). The drummer role was performed by Pitchu Ferraz, since the beginning of the band activities; however she has left the band due to personal reasons before their previous summer tour around Europe and USA, but at this moment, the Canadian drummer Samantha Landa has joined forces and is doing a great job until a new drummer can be found.
With a new album, “Agony”, released last Spring via Napalm Records, in high rotation after the successful “Victim Of Yourself”, Nervosa gave and energetic and intense performance, causing some timid and small moshpits, even though the reaction of the audience varied between enthusiasm and surprise, since there were people still entering in the house.

Fernanda told they were happy to play in Lusitanian territory for the first time and finally to speak in Portuguese, thanking Destruction not only for being one of their main influences but also for the invitation to join in this terrific tour. What a badass show, these brave women won the first battle of the night, shooting in all directions weapon songs like “Hostages”, or “ Into The Moshpit”. 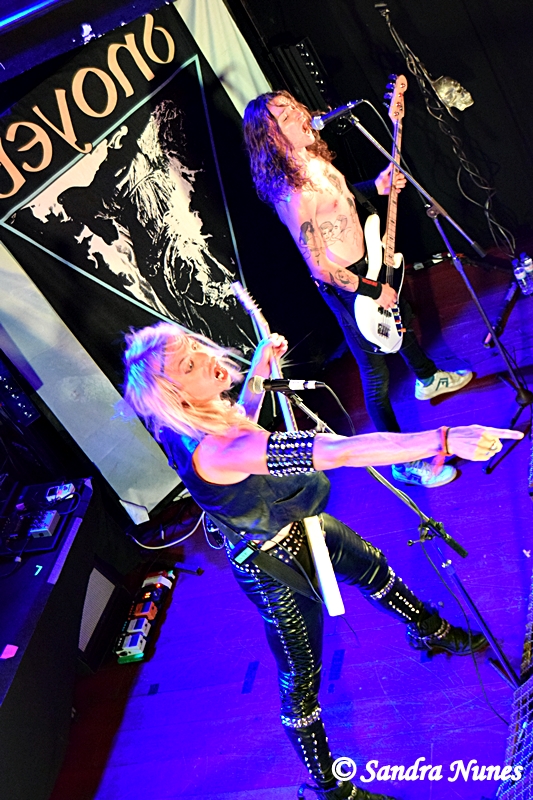 The next invaders on stage were the Swedish metal thrashers Enforcer, playing for the fourth time in Portugal, and brought the chaos since the first notes, presenting their latest work “From Beyond” while taking a break from the recording process for their next album.
It’s impressive to see a young band with only four albums released in their short career gaining a lot of fans with some themes already considered as classics, “Destroyer”, “Undying Evil” or “Live for The Night”, just to name a few.
No need to say more about the audience’s reaction as the venue was already packed after 20.00 pm and the real moshpits had started and crowd surfers were visible with more frequency, making my spot in the front a dangerous one so I decided to go upstairs and have a better view from there.
“We are Enforcer from Sweden, are you ready to break your mother.cking necks tonight?” – these were the words spoken by the vocalist/guitarist Olof Wikstrand, expressing their pleasure to be back and felt grateful for such welcoming. The chaos was already spread and no one else could resist banging the head to these guys sound with reminiscences from the 80s, turning it into a great comeback after some visits and everyone was already shouting for more during the final applauses, but it was about time to another battle. 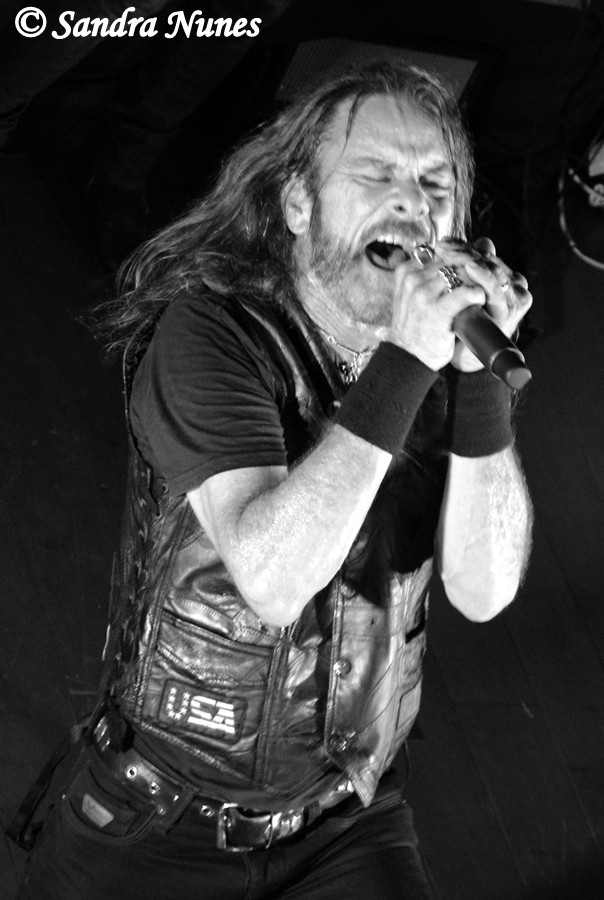 The classical and legendary band coming from the other side of the Atlantic Ocean, the US-based thrash monsters, Flotsam & Jetsam had taken the stage and played a memorable gig for they were the ones I was so excited to see besides Nervosa.
I could notice an attentive public, probably tired due to the energetic discharge towards the previous invasion, but also banging to Flotsam & Jetsam’s brilliant performance.
With a homonymous album on their luggage as if the band were releasing more treasures from the past and refreshing themselves. Pearls like “Seventh Seal”, “Life Is A Mess”, “Dreams Of Death” or “No Place For Disgrace” were some of the highlights from the battle and the vocalist Erik A. K. was also happy to be back and to take part in this tour, thanking and praising the other bands and public. 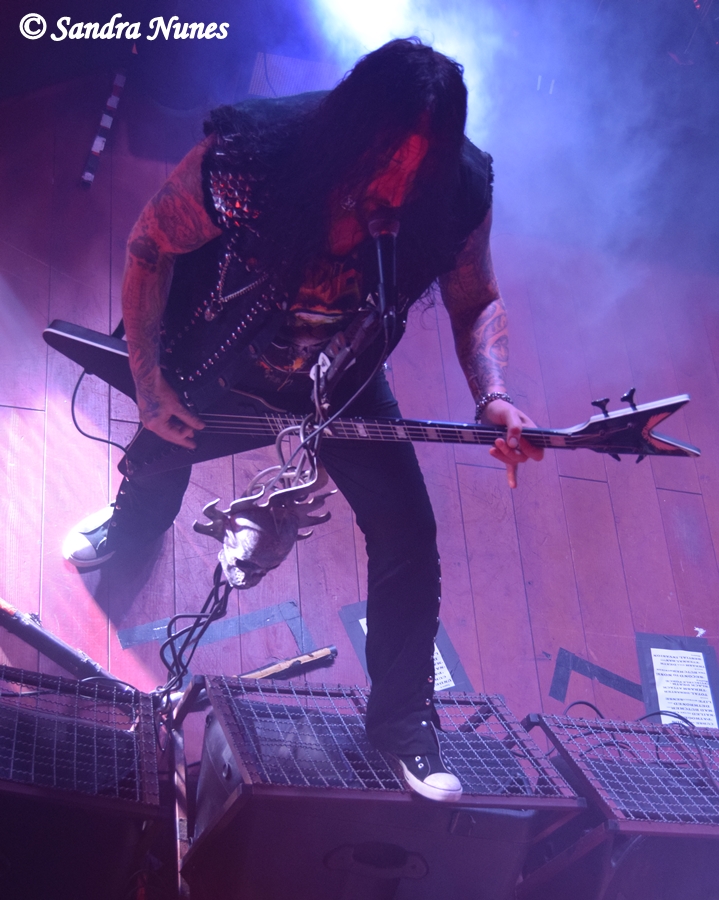 Then the most awaited invasion of the night came, hotter as hell under the red lights and smoke, the German trio known as Destruction literally made it. Opening the ceremonies with “Under Attack”, from their new full-length with the same name, setting down the fire at RCA Club and playing a deluxe set full of mandatory classics like “Nailed To The Cross”, “Mad Butcher”, “Life Without Sense” or “Thrash Till Death” that put the audience in complete redemption. The band doesn’t need any introduction because the vocalist/bassist Schmier and his henchmen literally did justice to the band’s name, but not before thanking the audience and the bands that were joining them in this attack, especially to Nervosa.
The interaction between Destruction and the audience was notorious, guess the famous sentence “No rest for the wicked” can be applied here. All of these great Thrash metal bands arrived, saw and conquered, wining all the battles, so this event is a strong and serious candidate to one of the best for 2016.