Earlier the guys of Morudes released their album “Sinister Beat”, they took some time to answer some questions about this album.
What can you tell me about the process of creating “Sinister Beat”?
Amund: This is the first time in many years that we’ve worked with a producer. I am pretty much used to come to the studio with a finished song, a demo, where I play all the instruments, and based on that, I get input from the band to do the final recording with me and Henrik running the show. This time, with Erlend, whom we really trust, it felt really good to be able to focus on playing and not the over all concept of the album at the same time.

Henrik: We’ve done several attempts to achieve a studio sound for this band without ending up with adding distortion to every track and over compressing everything. Through the years actually…

Amund: It’s so easy to do that, go for that angry Garage sound, it’s so cool, I mean as much as I love that, when you listen to it several times, it kinda makes your ears bleed.

Henrik: Yea, It can become a one-trick-pony type of thing, I mean, where can you go from loud and distorted? Pretty much nowhere. So a lot of this process was trying to capture a sound that was unique and interesting and that was based on something else than just volume and anger, and I think we got pretty close.

How do you generally work? Do you have songs finished before recording or do you create while recording?

Henrik: This time we had a lot of songs that we’d written over the last two-three years, that worked well live. At the same time we had some sketches of new ones, that we felt worked even better. So we changed around on a lot of things. Across My Bed is pretty much how we had written it, while for instance Magnet City is completely re-modelled in the studio.

Amund: Yea, Erlend and I was fooling around with a desert blues – bombino – ish riff that we wanted to fit in the middle part for that one, it came across pretty cool. We had the tape rolling for hours and hours when we first started, just to capture ideas. Me and Henrik would just go on jamming grooves and fills and riffs. Ideas from the top of our heads. Erlend kept the tape rolling and after a few hours we’d go into the control room, and he would play us back some of the parts he thought was the most interesting. We took some of those parts out, and made songs from them.

Henrik: We had some ideas for lyrics before we started, and some was written during the process as the song developed. It’s a great feeling when your able to just dive into what you’re doing and shut everything else out. When you get that flow of thoughts and ideas, you start to visualize where the story is going, that’s when you’re able to get some work done.

Amund: I know, and that particular moment is so easy to get out of, unless you focus.

Henrik: Exactly, distraction is just an empty coffee pot or a meal away, so the clue is to stay in the bubble I guess.

What did you spend most time on?
Henrik: This process was just really enjoyable and throughout inspiring for me. I think it has a lot to do with having Erlend on the team. Me and Amund, we’ve done tons of recordings together, we finish each other sentences, and we can get pretty intense in that setting…haha..

Henrik: So, basically with the extra set of ears and really good taste in music that Erlend brought in to this project, it inspired us to go in different directions and follow other ideas than we would normally do. That kept the whole process interesting and you did not get the feeling of time dragging out and not seeing any end to the project.

Amund: I think the work mentality in between the three of us is a good match. We’re used to getting into that zone where you DO IT, you don’t fuck around for weeks and weeks then thrashing everything to start all over again. You follow your guts. You make choices as you go and you don’t dwell or question them again and again.

Henrik: I think what we spent the least time on, was the meals. When Amund had that responsibility, jeezes.. He might have served us dog-food I don’t know.. I swear it tasted like that…haha..

Amund: But you got bread and butter on the side right?…haha

Henrik: Titanic of all lunches…haha..
What do you consider the key element specific to this release?

Amund: That’s a tough question…ehh..If you’re referring to the album it selves, I’ll have to say drums, guitars and a huge room, that’s pretty much the key elements that we built this sound on. The grooves and the riffs, and how it all melts together.

Henrik: I think we managed to develop a new sound for us, where the ambience in the room blends together with the instruments, and how all the bleed in between them creates interesting additional sounds to the recording. You can hear the snare rattle in the guitar intros, and we just kept it in there.

Where are the surprises in the album for the long-time fans?
Henrik: I think a lot of our followers have an idea that this duo is very hard hitting and extremely loud, and I mean, sometimes we are…haha.., but for the album, I think the biggest surprise must be that it’s not that extreme.
I mean, there’s loud rock, in-your-face references on this album for sure, but there’s a lot of melodic more quit songs as well, with harmonies and a lot of dynamics.

When listening to the album the song “A House Where Love is Gone”” jumped out. Can you tell where that song comes from?
Amund: To me, there is a Norwegian desert reference to this song somehow. I mean, we don’t have deserts in Norway, but we have wide open fields and nature that is beautiful to look at but yet so uninviting to spend time in, freezing, rainy and cold as hell, at least right now. This groove with the shakers and the drone in the background gives the song a forward motion and a spacey atmosphere. To me this sound creates the idea that you’re looking at someones life from a distance, like in a movie.

Henrik: The story is….I don’t know… It’s a sad realisation that something you built your whole life around suddenly seems to choke you, and you need to get away from it. I think it applies to a lot of different situations in life; a destructive relationship or a way of living that eats you up inside.

What do you consider the main differences between a live and recorded experience?
Henrik: unless your aiming for a live recording, I think you should always make music for the speakers when you’re making an album. If scraping a shovel against the floor makes a really good sound in the mix when you tweak the hell out of it, that doesn’t exactly mean you should start bringing a shovel with you on stage… haha..

Amund: Some people would do that..haha.. and a coffin haha..

Amund: You’re creating an illusion when you’re making an album, it doesn’t matter what it is or how it’s played…unless it’s a really good story…if it sounds good.

Henrik: At the same time, we’re a duo, and if we’d overdub the tracks so much that it sounds like a band, it wouldn’t make any sense really, cause you would understand immediately that this couldn’t be done live. I mean, I have absolutely no rule that something has to be done live, like I said, It’s music for the speakers, but we wanted to create a sound based on the two of us that didn’t give the listener the idea that something was missing, a full sound. In this case it meant keeping a lot of the noise, the room, the low end and any sound that you would normally edit out, we’d keep it in there.

Amund: Sure, and I think that studio and live versions can be very different form each other, but from my opinion, as a listener you should be able to like both. 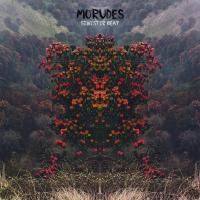 What song is most different now it is finished compared to before the recording and why/how did it change in the process?
Amund: I think they all changed a lot in this process really, to the better. Six Feet Under was completely a spare of the moment thing, so that particular song we did not have anything written to it before we started recording it. Usually we would have a verse or a riff or a groove, but a lot of it was created in the studio process, how we put it together, changed a chord, turned the groove around. But it’s hard to point out one, they all changed during the process, and a lot of them was written right there.

Anything else coming up next, besides shows we found on your website?
Henrik: We’re constantly working on something. Amund is doing some solo shows this winter, while I am working on a project in the studio. We just had a Finish band over to visit and play with us, Pekko Käppi & K:L:L:H, a really mind blowing up-and-coming act. This guy Pekko plays an ancient string instrument with a bow, It kind of looks like a harp.

Amund: Yea, he puts this “fiddle” through pedals and amps and it comes out as a Hendrix-ish slide fuzzed sound that’s just amazing. And when he goes higher in the register, it almost sounds like a human voice, just great. You gotta check it out.

Henrik: We wanted to get to know this band, so we invited them over to play a gig in Oslo In February, we were able to fool around in the studio also, and if we’re lucky it’ll end up as a single one day. The other guys plays two and three stringed custom built cigar case guitars…anyway, we had a great time together.

Amund: Right now we’re also preparing to do a few selected festivals this summer, together with impro jazz trio, Bushmans Revenge. We had a great time sharing stage with them last year, and we were asked to do something together this summer. Of course we wanted to do that, they are a fantastic bunch of people not to mention incredible musicians.
Henrik: So, there will be some time dedicated to that project the next months, and all of sudden the summer festivals are here. Hopefully we get to come over and play for you guys some day.