After their show in Tampere´s Jack The Rooster, I got to interview S-Tool in their backstage. I was lucky that the guys were still energetic after the show. Here´s how Ville Laihiala (vocals, guitar) and Aksu Hanttu (drums) answered my questions.

Gamze: Thank you guys for meeting me. How´s the winter tour going so far, how´s the reactions from your fans?
Ville: We have only released two songs as singles. People don’t know our songs. Obviously because we have a past in music, maybe they come to see us and what we’re doing. But it´s been really surprising and heartfelt to see they’re actually enjoying our music. So tonight in Tampere was sold-out, yesterday in Oulu sold-out. I´m thinking “What’s wrong with people?” (Everyone laughs) It feels like that but obviously it feels good because we have this gut feeling that we’re playing from our hearts, we’re going old school playing this stuff.

G: I think people are hungry for this classic and original hard-rock kinda thing.
V: Maybe, yes. But you can’t really calculate anything like that while making music.

G: What else do you play on stage, some covers maybe?
V: We had something in mind for a cover but we have been busy working on the album so we didn’t have the time to rehearse anything for a cover but maybe on the summer festivals. Something by Entombed we want to do obviously because we have been playing a little bit.

G: I was expecting some Metallica…
V: It´s been on the discussions but if it’s going to be something by Metallica, it needs to be from “Kill `Em All”. That`s a big maybe though.

G: How did you like the “Hardwired…” album by the way?
V: It´s good but not a classic.

G: Do you get inspired by any specific bands or musicians?
V: We all have different influences because we come from different backgrounds, we didn’t even know each other that well before. It was just basic greeting before whenever we saw each other and that was it. So, we’re now getting to know each other as humans, also in this backstage and bar environment which is not healthy. Maybe Aksu will add something.

G: You also play the drums in Entwine. It´s a melodic Finnish rock band. Do you like playing that kind of rock music?
A: Of course. S-Tool is so different from what I have been playing before in Entwine. After all these years, it’s nice that you can learn something new.

G: Where does your inspiration come from when making music?
V: To me, it´s life. Everyday life you know ; family, disappointments, watching the news… You know I am getting old and I want to learn more about us as species that goes way too deep. And I don’t really like what I see in the world. I have to bring 3 boys into this world. What I write and play in this band is just my frustrations.

G: About that, I loved that nihilistic manifesto that you wrote on S-Tool´s Facebook page when you formed the band.
V: I think it’s realistic rather than nihilistic. If someone thinks this, I have got 30 more years in my life and what do I wanna do… You know? I know I’ve got 20 years if I’m lucky so I don’t wanna spend it in a mess like this kind-of-thing I’m talking about.

G: What´s the philosophy behind this band?
V: To me, it’s like generally to get the shit out, and to do it for the sake of feelings. I made all the songs and I made them in my own studio. Maybe for the 2nd and 3rd album, there will be songs from the other bandmates, this is definitely not a “Ville project”. This is just a big pile of S-tool.

G: How did you guys come together as a band?
V: The idea of forming a band out of these songs came from my wife. She heard the demos and she said I should make a band around it. At the time, Poisonblack ended so I was like I´m done with music. So I called one person and it went like naturally, as he calls some other dude.
A: You called me and I called Sami and Sami called Kimmo.
V: Yeah, Vesa (Ranta) recommended Aksu when I asked him if he knew anyone who can play.

G: Cool thing. Do you play low-tempo songs of the band live on stage?
V: Let´s just say we have been playing all the songs live that we have rehearsed because we don’t really have the material that much and then some songs we played tonight will not be on the album. 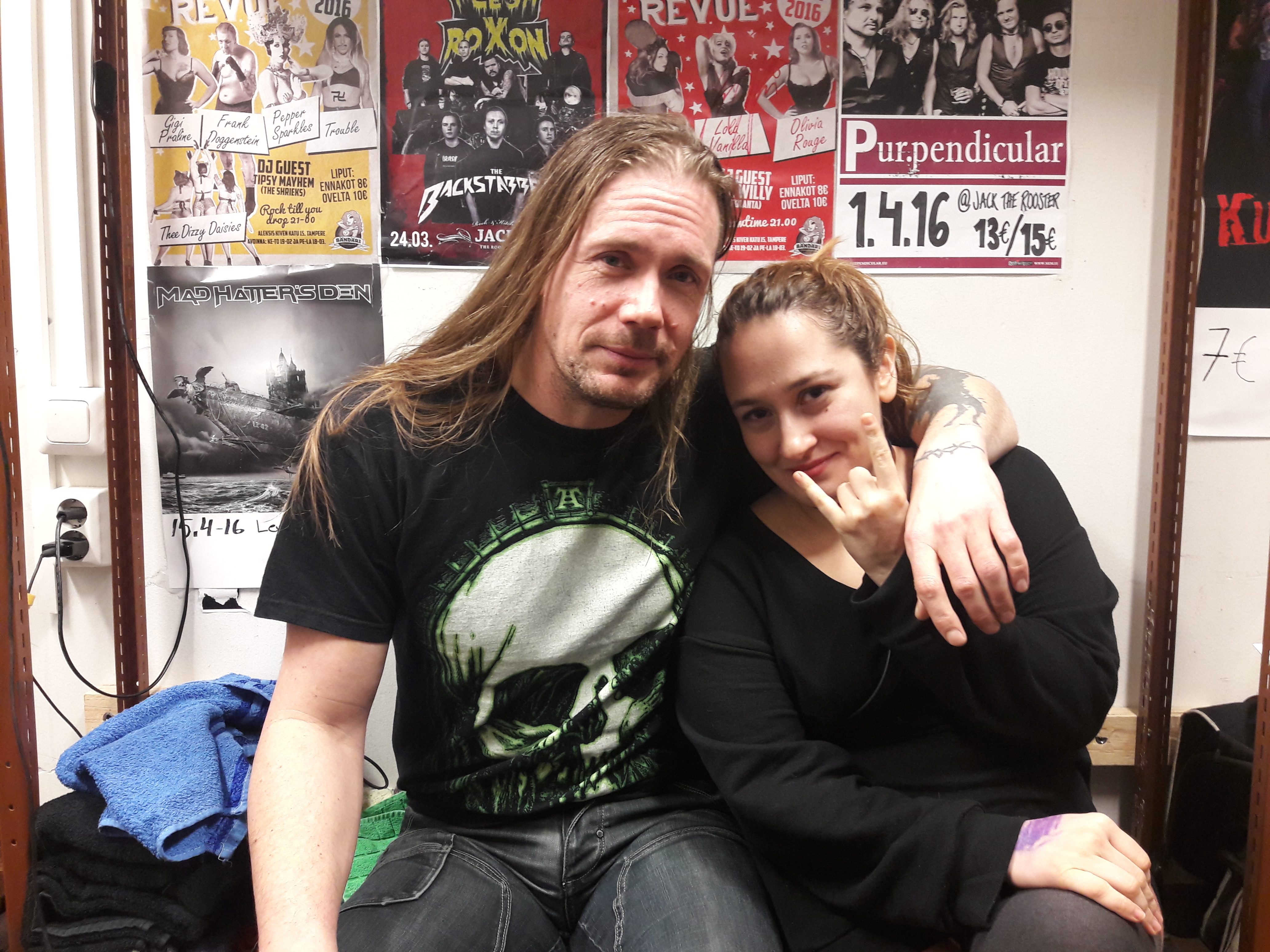 G: When´s the S-Tool album coming out?
A: Good question.
V: Let´s say if some label gives a damn then we wait until we mix it a bit more. It will be out, that’s for certain but I can’t give you an exact date.
A: We’re working on it.

G: How did the Kickstarter campaign for the album go?
V: I put it out just to reach out to people. We couldn’t have made this album without the Kickstarter support coming from the fans. When we put it out, we didn’t have any materials to offer as a band because we were flat-broke. And these shows we’re doing, we don’t get any money from them but we don’t care, we don’t have to pay for doing shows out of our own pockets, either so it´s plus minus zero situation. Whatever we get out of these shows, we are putting on the album. To thank our fans who contributed, I’m planning to put it on the words, I don’t know what I’m gonna say, but it’s appreciated.

G: S-Tool´s hard rock style started way back from the Poisonblack times, I think with “Home Is Where The Sty Is”, am I right?
V: Actually, this is the kind of musical direction I would have taken with Poisonblack and there were disagreements; not only within the band but to do this kind of album for the PB fans would have been too much of a sharp turn. I just wanted a clean slate. I loved Poisonblack, and I still do from the bottom of my heart but I wanted no musical history, so here’s my frustration. And this started with “Nothing Else Remains” from the Lust Stained Despair album. It started already from there. So this band has nothing to do with Poisonblack.

G: What are your favorite moments so far from this winter-tour?
A: Radio-Rock Cruise was fantastic! Audience was insane!
V: I can’t pick one show out of these eight shows, all has been good but personally for me to get to know these guys has been the highlight. The band is as tight as your weakest link. And now they got to know a bit of my bad side, but that’s how music gets good. That was the enjoyable moments for me. The most important stuff also happens in the backstage and in rehearsals as a band.
A: The whole thing is brand new for everybody and we haven’t practiced that much so all those things get better and better, gig after gig. After the sixth gig of this tour starting from the Radio Rock Cruise, I think we have gotten so much better, I thought “Now we fly on the stage!”.
V: A lot happens during the showtime. Now we have had 8 shows during 4 weekends, we played good shows, bad shows and kinda argued ones and there happens to be an emotional rollercoaster and also musical rollercoaster effect. Every fucking time, through disappointments, you grow stronger. 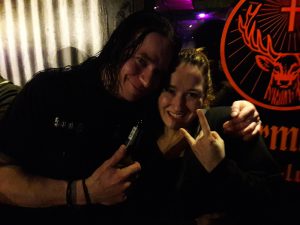 A: Here, taste this, it´s water. (Hands me the Kossu)
G: Hey, you guys are like Russians then, drinking vodka like water…
V: I don’t drink that stuff, if I drink that, people will die. (Laughs) I gotta find my limitations.

G: All right, thank you guys and looking forward to getting my hands on the S-tool album.