The German “forest metallers” Finsterforst have released a rather interesting and fun EP called “YOLO” recently and they are also currently on tour with Nothgard, Heidevolk and Equilibrium!
The band delivered an awesome and fun show in Bochum recently and after the show, vocalist Oliver Berlin and bassist Tobias Weinreich answered my questions about the new album, the tour and… drinking of course!

Firstly, welcome guys! How was the show today?
OB: It was just fun! There were lots of people and it was amazing! That’s how it should be!

And how has the tour been so far generally? How have the reactions been?
OB: We had two shows where there weren’t so many people but it was still fun. Actually those shows were also fun because we had more fun with each other. With the other shows, there was good audience and a lot of people. We are really happy to be here.

How has the reaction been so far to the new EP “YOLO”?
OB: If you read the internet, it’s very mixed. A lot of people are annoyed which is exactly what we wanted to do. The new stuff really work well live. People are really in a party mood. And that’s what we wanted to do!

How did the ideas for the new EP arise? Did you have the idea for a very long time?
OB: The idea to do an EP that was gonna be fun and about drinking started when we recorded “Rastlos” back in 2012 so it’s rather a long process and years in the making but then we first wanted to do another album because we didn’t want to become one of those fun bands. All in all, this is just an EP and we are having fun with it. Then we will go back to the normal stuff. Our own songs were written not that far ago but the cover songs… oh my god, there were hundreds of ideas about cover songs and we had to put it down to the last 5 that made it to the EP.

Who had the idea for which cover song?
OB: Oh wow… I think everybody wanted to do a cover of a modern pop song and for Miley Cyrus (Wrecking Ball), everybody was like “OK, let’s go for it”. I don’t know who came up with it though. Michael Jackson (Beat It) was definitely Simon’s [Schillinger, guitars] idea. He wanted to do that one. I don’t know who had the idea for K.I.Z. (Der durch die Scheibeboxxxer) but it was clear that it had to be that song because I am the only one who is able to rap like that. Everybody is a Kassierer fan in the band so it was clear that we had to do that one (Das schlimmste ist, wenn das Bier alle ist).

Which other cover songs did not make it to the EP?
OB: For the modern pop song, we also had Bruno Mars. I would have loved that one with the trumpets.
I also wrote a whole text and wanted to change “Ist das noch punkrock” by Die Ärzte to “Ist das noch pagan” but Simon didn’t want to do the song so… dammit!

Was it more fun recording your own songs or recording the cover songs?
OB: For me personally, while recording K.I.Z. for example, I did one line and I had to stop laughing. But then again with “YOLO” it was the same so I had fun with the whole recording process. There were some stuff that was difficult to record but in general, I never laughed so hard in the studio!

Let’s talk about the album title.. Why YOLO?

TW: It’s exactly the opposite of pagan!
OB: It is indeed exactly the opposite of pagan. Because everybody is like “Oh you have to behave like this and that in the pagan metal scene”. We don’t like it and we have never been like that. We are always the ones who like to party. When everybody says “Dude shut up”, we are like “Fuck you!”.
First, we wanted to do an EP just about alcohol and drinking and I had the first songs “Bottle Gods” and “Hangover” which are about alcohol and I was just bored by writing more about that. And then I was like “Fuck it, I am gonna invent a Northern God”.

Speaking of drinking, can you name a drink that describes the character of each band member?
OB: Oh that’s an interesting one… *thinks*.
Tobi [Weinreich, bass] right here next to me, he’s a shot.

Like a really tough shot?
Doesn’t matter, it’s just a short drink. Tobi is like fucking vodka!
I think… What is David [Schuldis, rhythm guitars]? I don’t know.. David is like wine with a lot of sugar and salt because it’s wrong!
Simon hopefully is like a good wine, getting better with age…
I am beer definitely. I am one of those who can’t afford more!..
Sebi [Sebastian Scherrer, keyboards] must be a cocktail… because a lot of sugar makes you fat!.. This is such a great question because you can be mean to band members!
Our session musicians on this tour are like empty glasses!
… and Wombo [Cornelius Heck, drummer] is just Fanta.
TW: He’s fanta-beer!
OB: Mixing Fanta and beer… Nobody would do that. I have actually had fanta-beer on this tour and I hated it!

I know there are also people who mix coke and beer…
OB: Oh yeah I like that. It’s good for the voice.

Oh yeah, I have seen examples of that..
OB: Yeah me too… Like, guys falling asleep right next to me on stage.. I was like “Wake up!!”. After that we were like “Let’s not drink too much before the show”… but then it didn’t last long, it just lasted for one other gig and then we were like “Let’s drink more but pleease not too much”. You gotta behave!

Do you want to do another EP like this?
OB: Right now it’s a one time thing. But I can see us doing something like that in the future but not next! Next album is going to be serious.

Do you have any ideas or updates already about the new album ?
OB: Right now we are talking about which direction we are gonna go but not any concrete or special ideas.

You have also conquered quite a lot of countries outside of Germany. Do you have any other countries on your wishlist?
OB: I think everybody would love to go to the USA and Canada but me personally, I would love to play at South America, it’s so fucking extreme!
I watched a video of a Megadeth concert in Buenos Aires and people sang the fucking guitar riffs louder than the actual riffs and that’s what you wanna have. People are really passionate. Other than that.. we want to play just wherever they want us. Russia would be great.

Which country stayed in your mind as the highlight?
OB: Well I cannot divide it by countries but more like cities. The coolest gig was in Toulouse when we played with Trollfest. People were really crazy and just the whole day was really nice. Then of course whenever we get home [Freiburg], it’s really great.
Today, Bochum was also great. We haven’t been here that often.  It’s quite a big scene here.

What’s coming up next for Finsterforst after this tour?
OB: We have some other shows and next summer, we will play in festivals. We are thinking about a tour in spring but let’s see if it happens.

Last words to the fans?
OB:Never drink…
TW: and drive!
OB: Never forget to drink.. no! Just have fun because life is short not to have fun. It’s good to be serious but if it’s not fun, then it’s not worth it!… and enjoy Finsterforst of course! 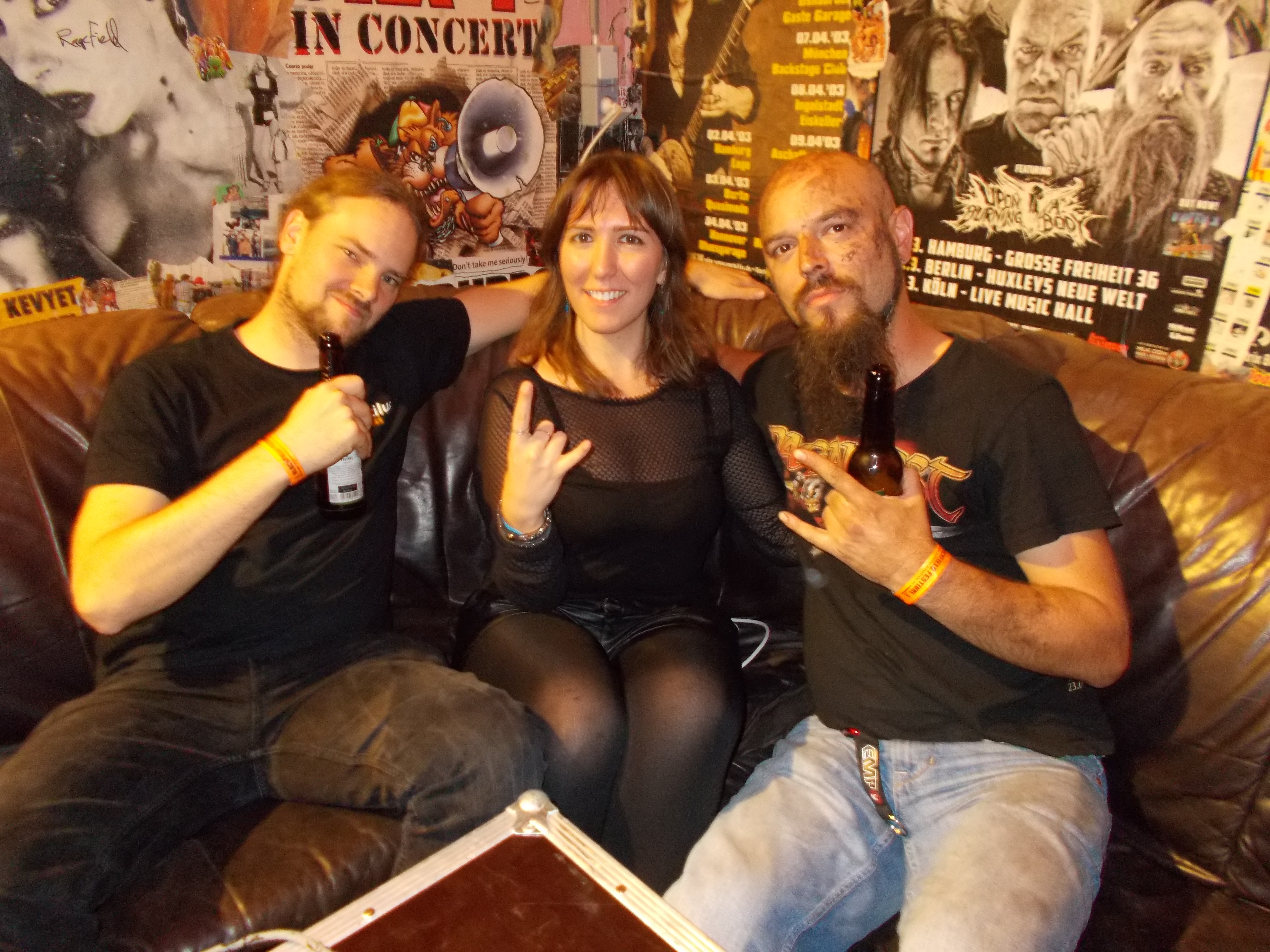