Blind Channel is an intresting group who shamelessly mix metal with pop, hip hop and rap elements and they manage to make it look and sound so good that we had no choice but to have a few words with them after their show.

R: Let’s start with an easy one, how do you feel after yesterday’s gig? 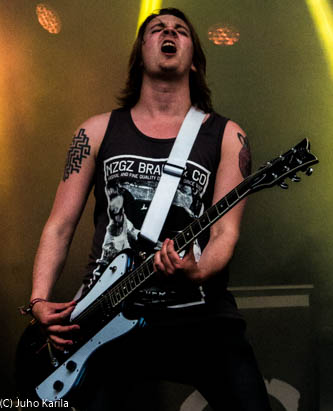 N: Absolutely amazing, was a really great show. We tested pyros and bombs for the first time, it was really hot and the atmosphere was just perfectly great.

J: It was fun playing pop-ish music for metalheads.

R: Yep, what do got going and what’s coming up?

N: We tour playing summer gigs a little, at Qstock festival in Oulu for example and then a couple of times abroad. Then we got quite a lot of club gigs and, as a big thing, our debut album coming out this autumn.

R: Then a little about songwriting process? Who does what and how do you get started?

N: It basically begins with us four (me, Olli, Joel and Joonas) and our drummer does his part of course. Then we arrange the song together as a band. It can be some riff or a vocal line, if it starts with me, etc.

R: How about your inspiration, influences and sources of inspiration? If we think about writing music?

N: I don’t know about those inspirations but sometimes I just got this feeling that I’ll write songs. And sometimes I have periods when they just won’t come. Going out for a jog, or donig something completely different, is my only medicine if I can’t make it. And then I come back with fresh ears and so it goes forwards again.

R: How about those influences and sources of inspiration then?

N: Well, it’s kinda more in the performing side for me.

J: Children of Bodom was the thing as a teenager, of course, when I bought my first guitar. But then my taste in music went to a lighter side.

J&N: Of course Linkin Park has been a big influence and the new Bring Me the Horizon is a really great one too, so those are the biggest.

N: In the beginning we were described as Linkin Park kind of band but I think we’ve got rid of that nowadays. Which is a good thing, it’s kinda big burden to be constantly compared to your idols.

R: What has been the best gig of the summer so far?

N: It has to be that when we were an opening act in a Baltics tour. There were Helsinki, Riga, Estonia and Vilnius, and those have been the best gigs of our career.

J: Those were unbelievable, totally nuts.

R: Then those traditionals, that is free speech for Blind Channel.

N: Greetings to the fans and especially to those dudes who tour along seeing our gigs, they know who I’m talking about. They’re really a big part of this thing and the reason why we’re doing this.

J: Yeah, they’re so important part that you almost count them as part of the band. This would’t make any sense without them, because it’s so essential to have those guys in the front row, no matter where we are.

N: And thanks to your readers that you’ve managed to read through this interview and hopefully you’ll join us by embracing our latest single. 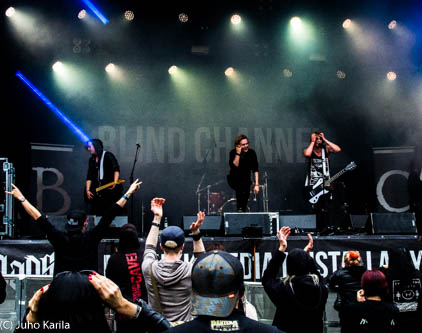