Day 2 started relatively early for us at the Theater Stage with SynthAttack. Being the first band at the second stage, they had to be the ones waking up the fans with their relatively aggressive beats and synths… and they succeeded in that! Despite the early hour, many fans gathered to see them. 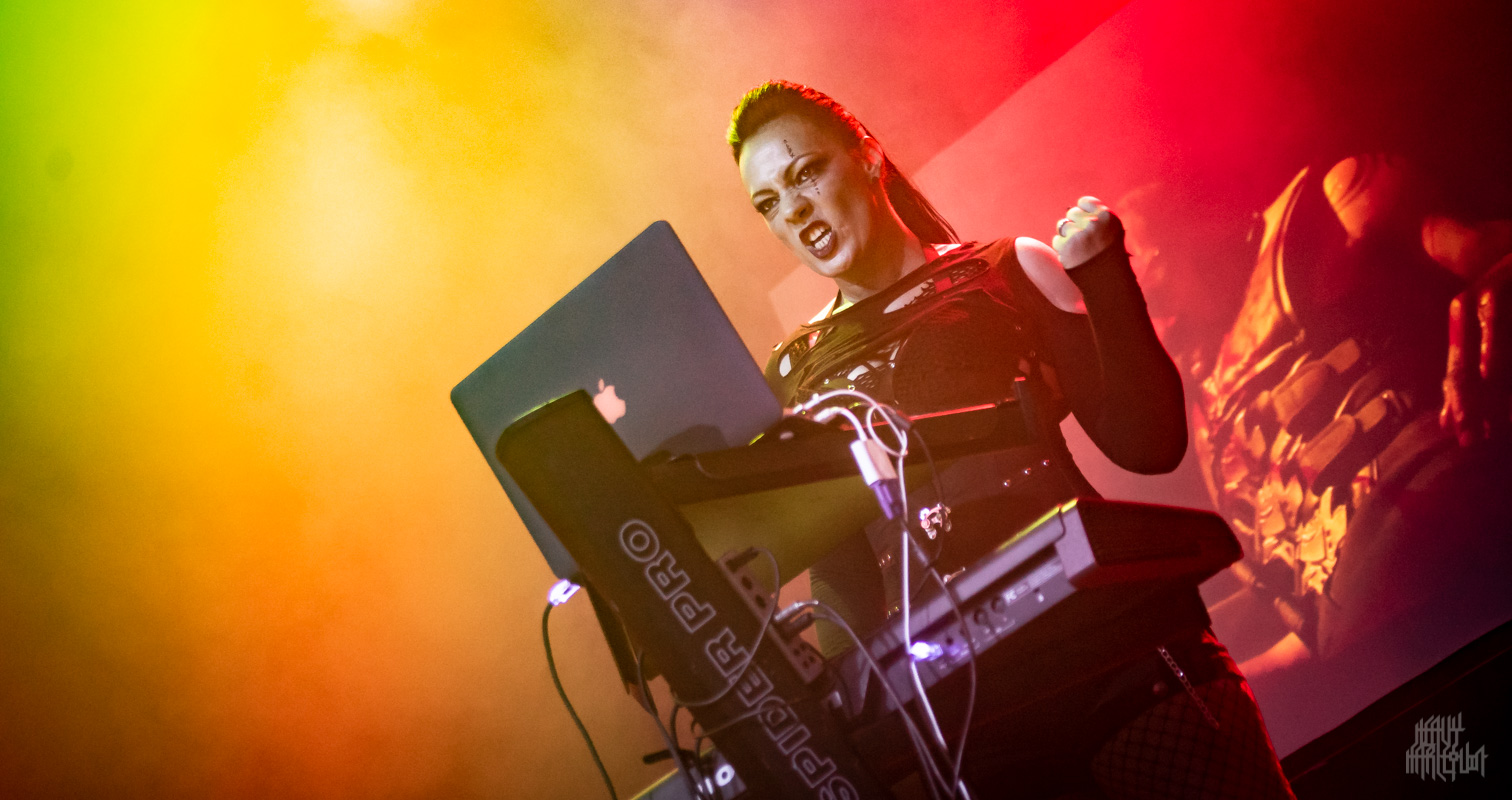 In the beginning of the set, we could hear that there were some technical problems  but it was probably ignored by many as I could see some fans already dancing and some singing along to the lyrics. It was maybe a bit early for us to enjoy the aggressive rave and electro beats the band provided (not enough coffee… :D) though.  One aspect I found a bit off was the front man’s face paint, which reminded me of the face paint of black metal bands; well, his vocals were also ‘metal’ at times so it was fitting at some times but mostly, it made me wonder if the band was trying a bit too hard… We also noticed the vocalist forgetting the lyrics at times… I guess it was relatively early for them as well. There were also some highlights I liked with one of them being the dancers on stage as well as the screen behind their set showing some bits from movies like Blade Runner, which added a nice versatility to the show. I also enjoyed the stage presence of the second band member Nicole. One could definitely tell she was into it with her backing vocals, especially in the last song “Final Salvation”. Overall, it was definitely a good show despite some technical problems; the band managed to get the crowd going at such an early hour! 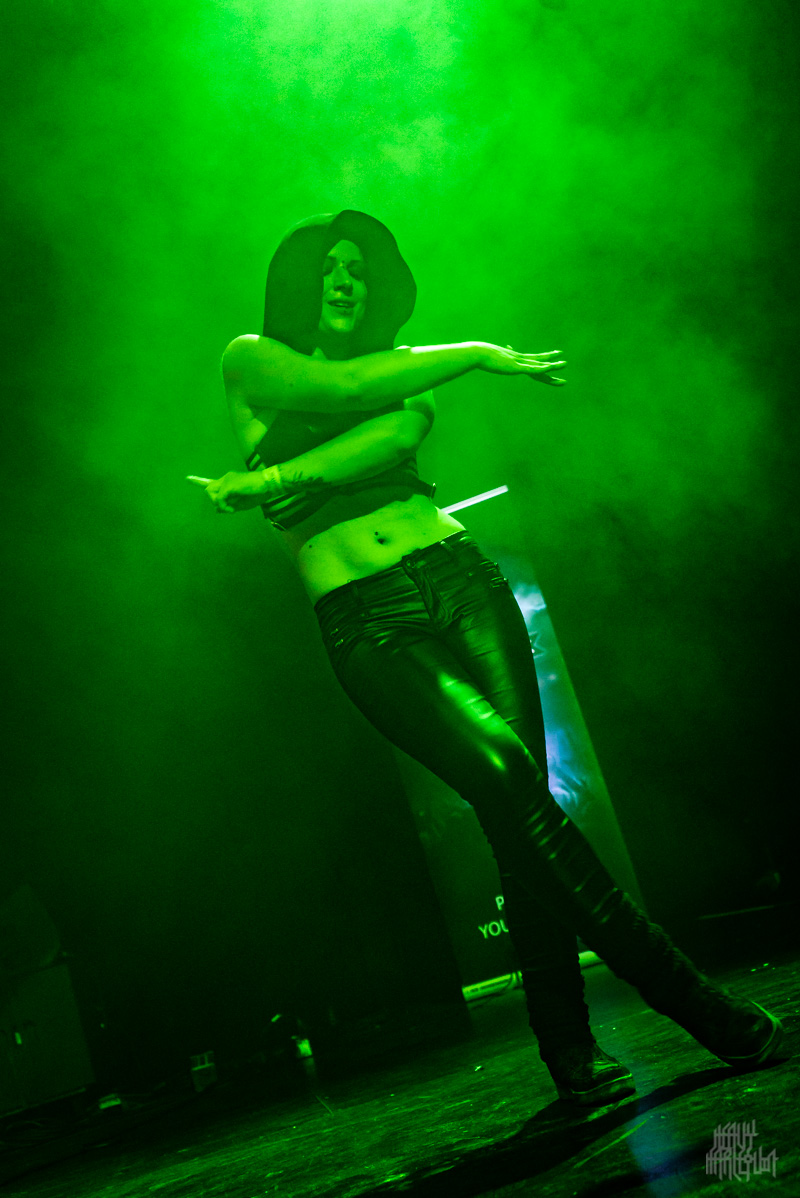 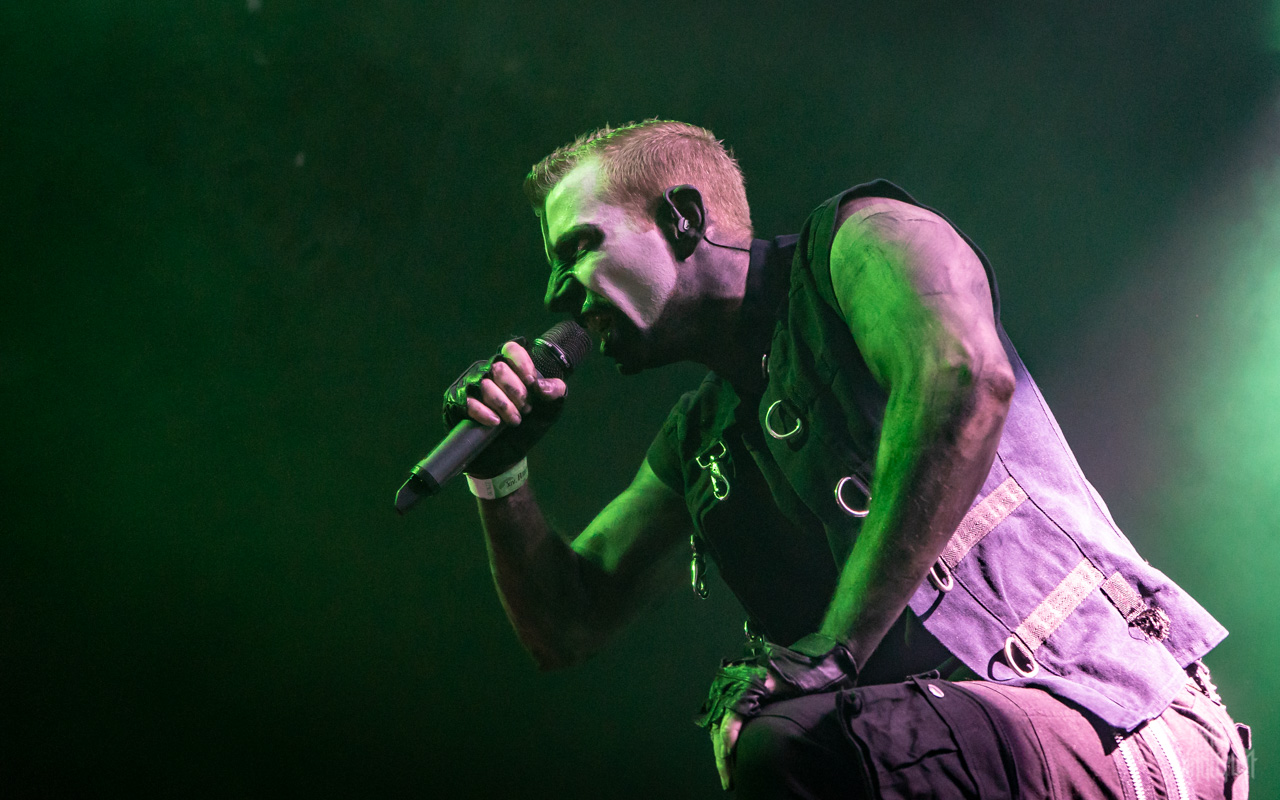 Sweden’s synth-pop trio Priest could be considered as the newcomer of the festival. The band is relatively new as they were formed last year and released their debut album “New Flesh” on November. It also got a good feedback from us and we even got to interview them last year! Their set at Amphi happened to be their first debut show in Germany so this was definitely a special for the band but also for the crowd. 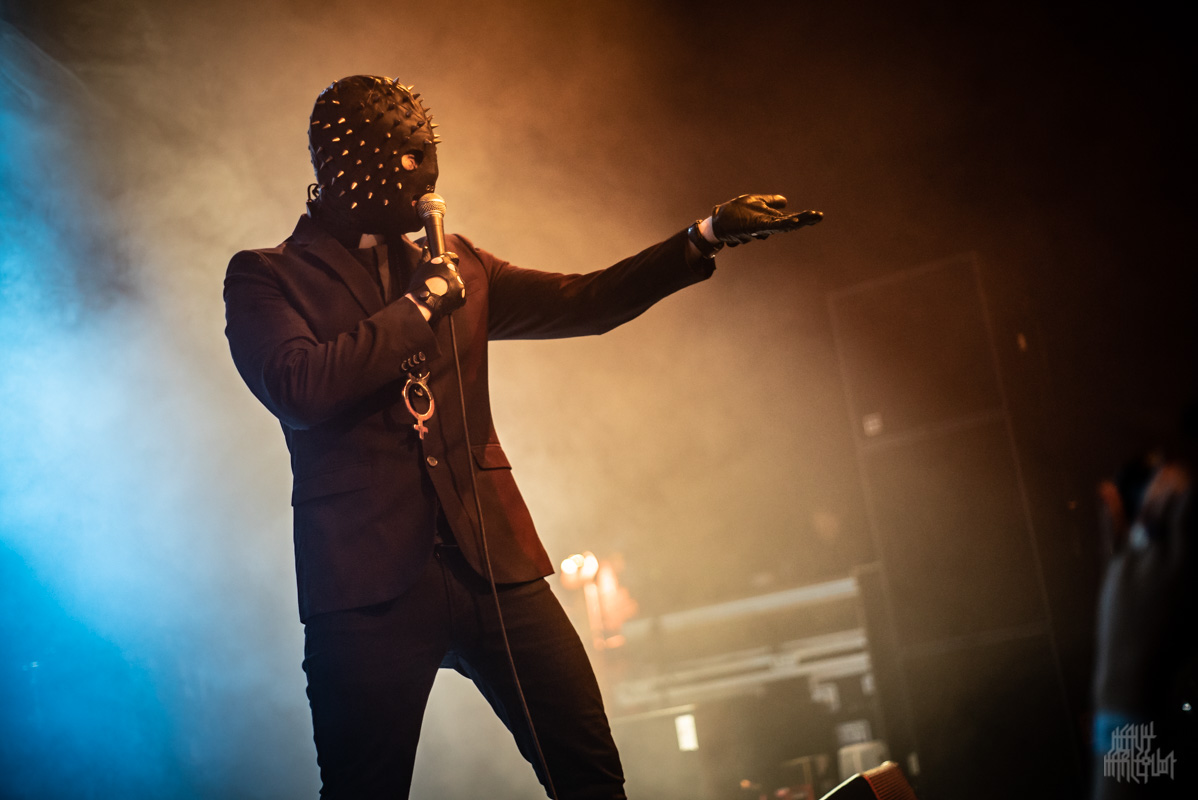 The band started their set with the relatively ambient track “Tria Prima”… but it was the second song “The Pit” that changed the mood completely. From the synths to the vocals, their start was just fantastic. We were especially curious about the front man Mercury’s vocals as he has quite a versatile vocal range in the album. He never disappointed us for one second; especially in songs like “The Populist” or “Call My Name”, the crowd was mesmerized by his vocals but also his stage presence overall was impressive. At times, he was just focused on his vocals and sometimes you could see him dancing on stage and losing it. As with Salt and Sulfur in the back, they were surely more in the background but it is teamwork in the end; Mercury’s vocals, Salt’s synths and Sulfur’s beats.. 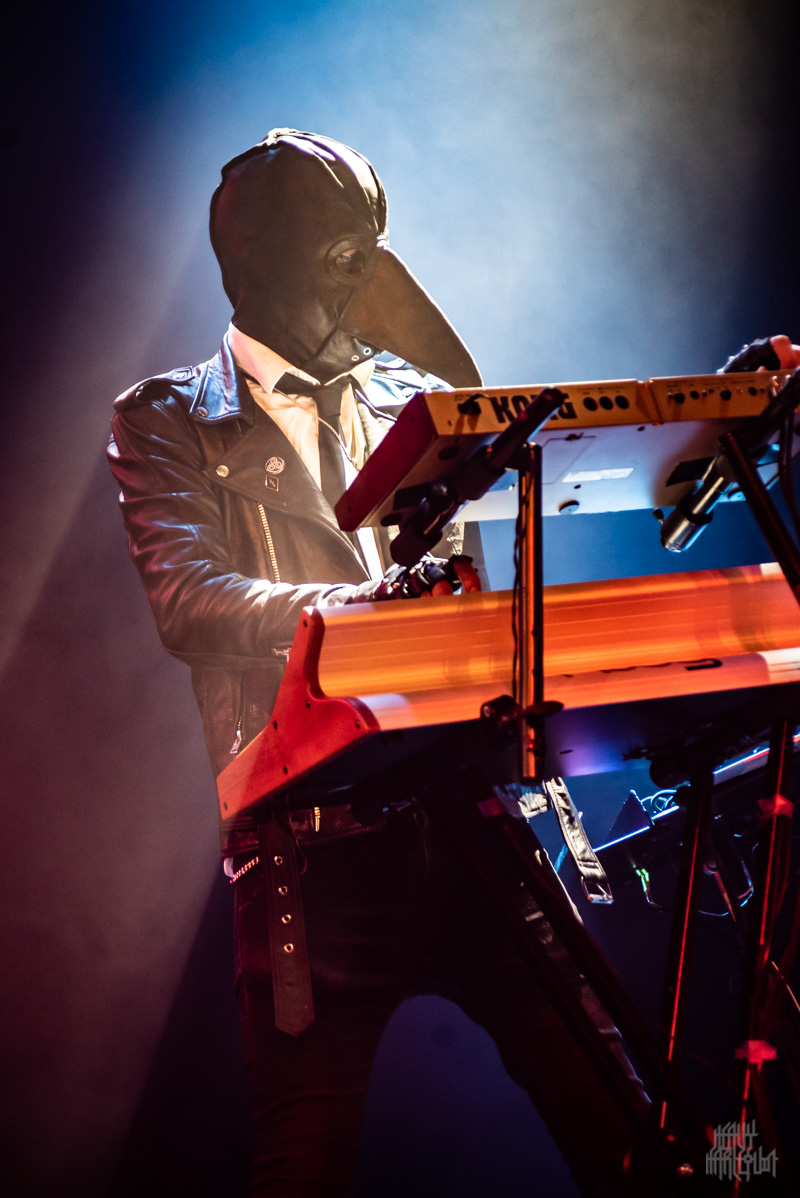 Furthermore, there were also some treats other than the songs from their debut; the band also played a new song from the upcoming album and a cover song during the encore. This holy trinity got everyone’s appreciation and were celebrated with cheers and dances. We even heard a fan screaming “Unbelievable” after one song! This and the overall atmosphere truly showed the enthusiasm of the fans. Considering how young the band is, it must have been pretty amazing for them to get such a nice feedback from the audience! 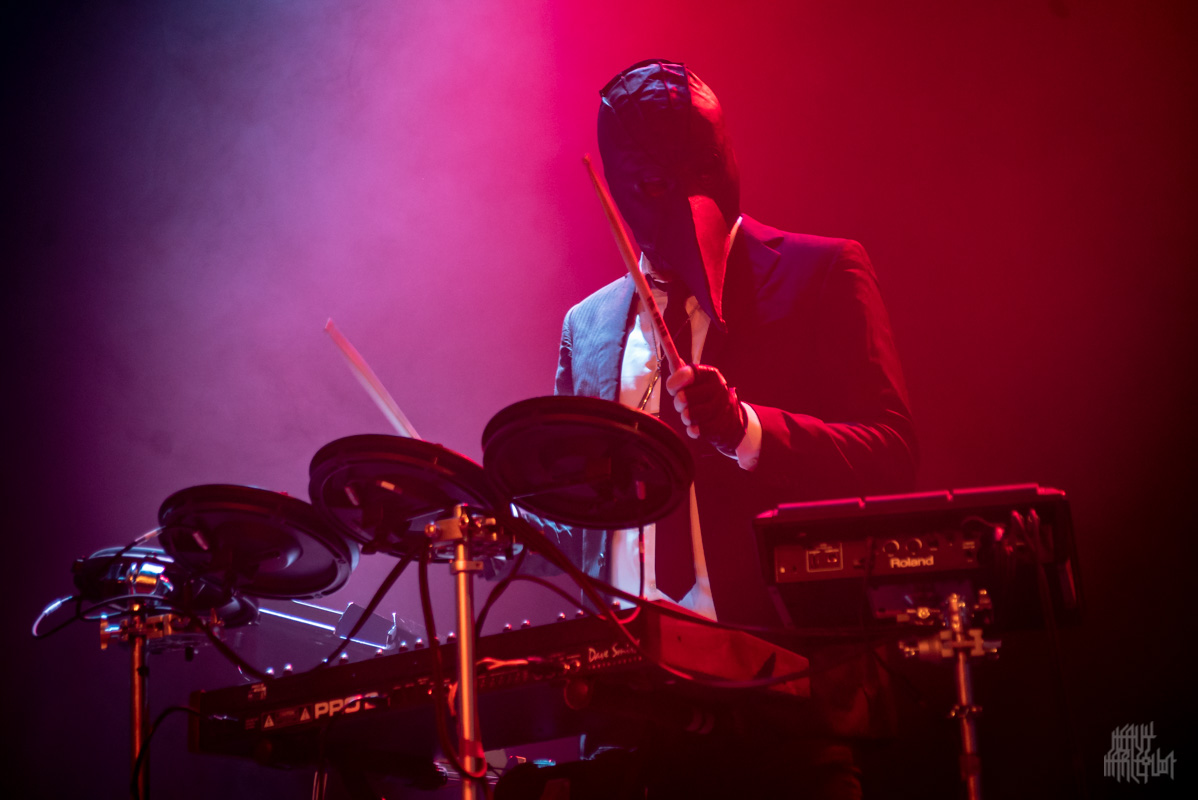 After some synth and rave madness at the Theater Stage, we decided to head to the main stage and change the mood a bit with Qntal. I gotta say, I first got confused about why a medieval band would be featured at Amphi but then it all made sense: electro-medieval. 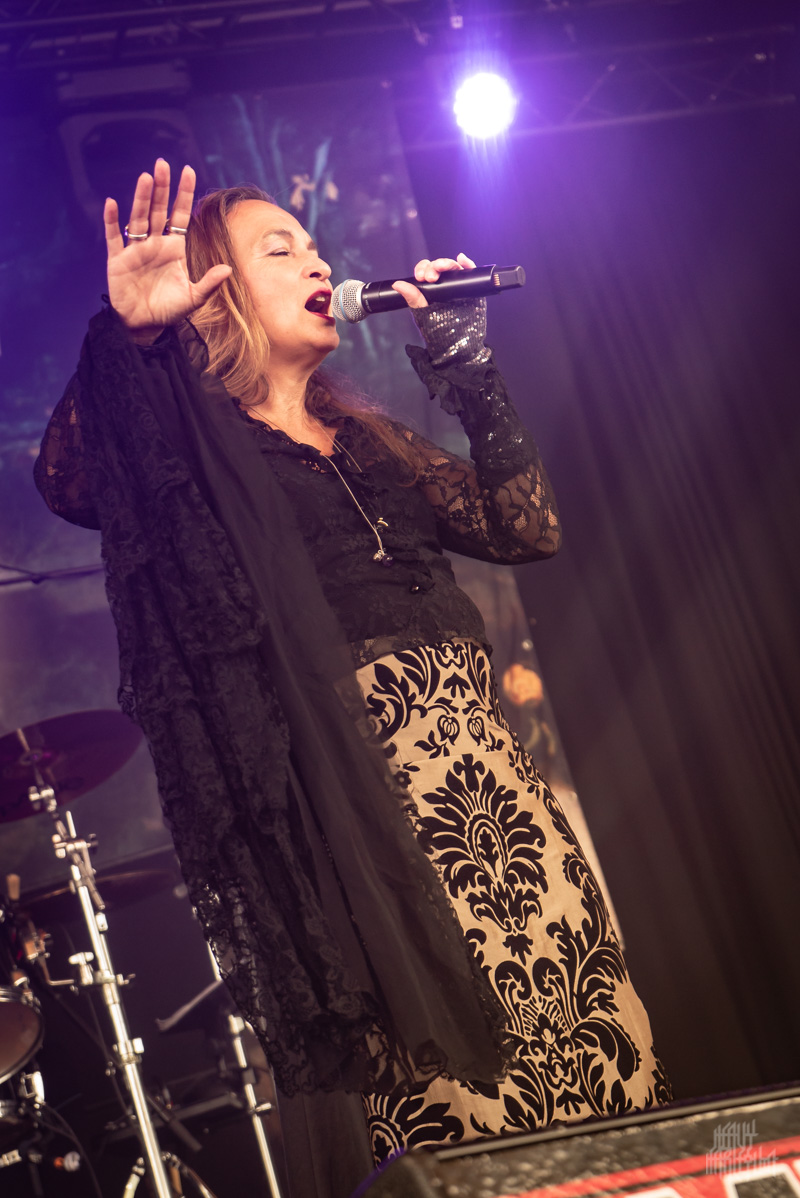 The band is also relatively old as they were formed in 1991 and their latest record “VIII – Nachtblume” was released this year. Even though we weren’t familiar with them, the first thing that made me like them were their spiritual approach, the nice mix of medieval and electro as well as Syrah’s great vocals; it was also her talent and stage presence that got my attention, especially in “O Fortuna”. We also enjoyed the calm and soothing set they had although it might have been a bit too ‘monotonous’ for the ones that just wanted to dance and lose themselves. Nevertheless, I could definitely see some people enjoying the music and the jokes the band shared between the song. Now, electro-medieval is not everyone’s style but it was an interesting change; compared to the electro bands we witnessed, Qntal had many instruments involved and of course had a female vocalist. They were maybe not the highlight of many but one of the names that stayed in my mind. 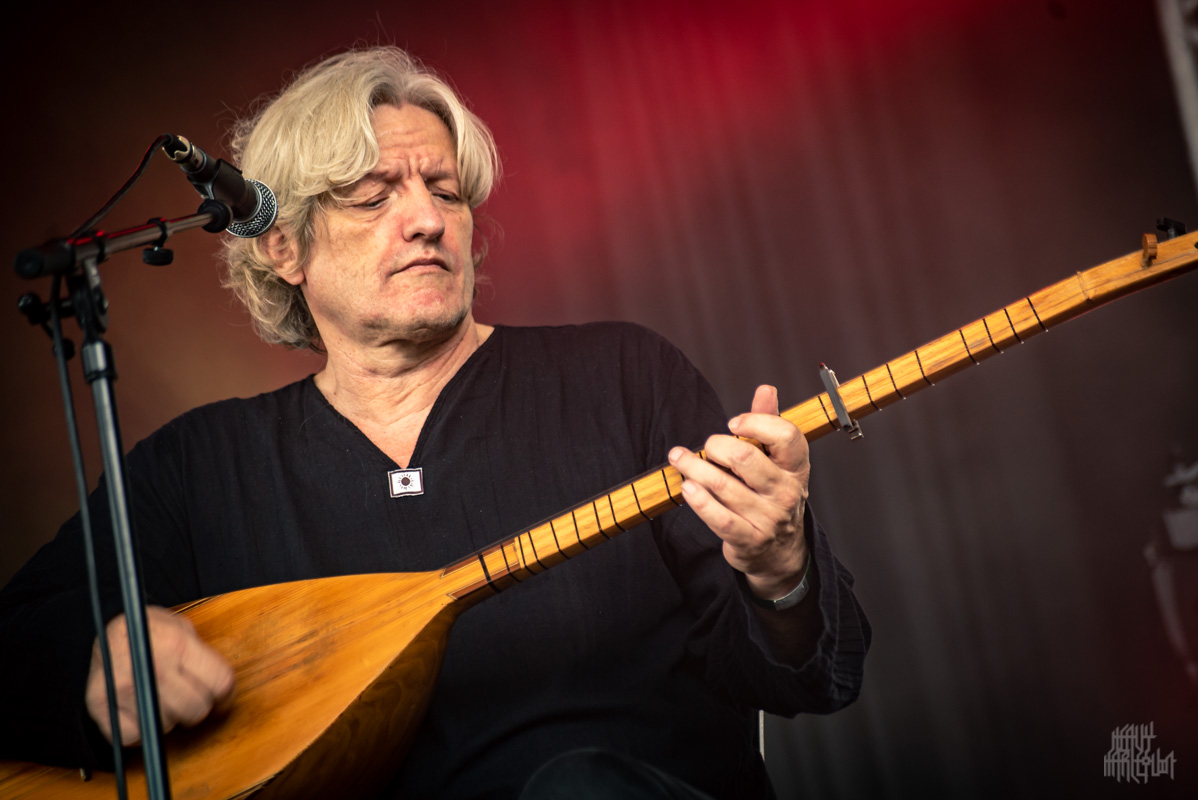 Up next was Solar Fake in the main stage. We didn’t get to see them up close as we had to take a break from the intense heat and cool off a bit. However, we managed to pay attention to their music. This electro-act was formed by Sven Friedrich, who is also known with his other bands Dreadful Shadows and Zeraphine. From what we saw and heard, there were many fans waiting to see them and so the anticipation was high before and throughout the set. Objectively, their set got a very good feedback. As for us though, the band didn’t really spark our interest. At times, I felt that the vocals were too weak and even out of tune and the synths too loud… Also we wondered if the band is a huge fan of Coldplay as we felt that 1-2 songs were very similar to some Coldplay songs… To each their own though, they were probably one of the highlights of many that day. 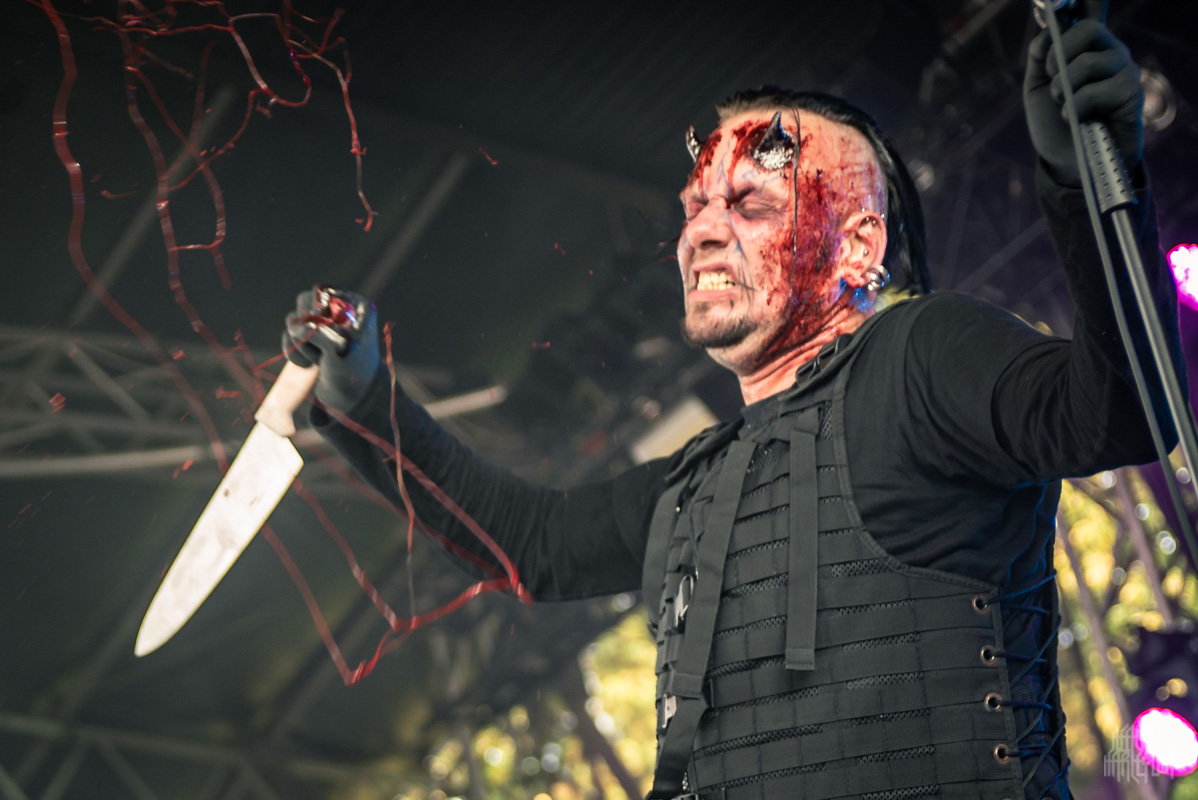 Moving on to Agonoize. Finally some aggrotech! They were formed in 2002 and one of the names Amphi is familiar with as well. Of course with a band like Agonoize, the first thing that got my attention was their outfit and stage presence ; from the drummer to the keyboardist, each band member was a highlight on their own and managed to reflect the aggression in the music very well with that gore. That being said, an Agonoize show with blood is mandatory of course. As a matter of fact, if we could summarize the show in a few words, it would be entertaining, cruel and bloody! There was one thing that disturbed the overall set and it was the technical difficulties sadly; I guess it was so bad that the front man had to get even more pissed off than he already is and throw away the mic stand… Ouch! Vocals are an important part of the band and it was a bit of a downer to not being able to hear the vocals properly and I guess he felt the same. Nevertheless, the crowd was dancing and losing themselves to the music so we could tell the band were successful despite the obstacles. 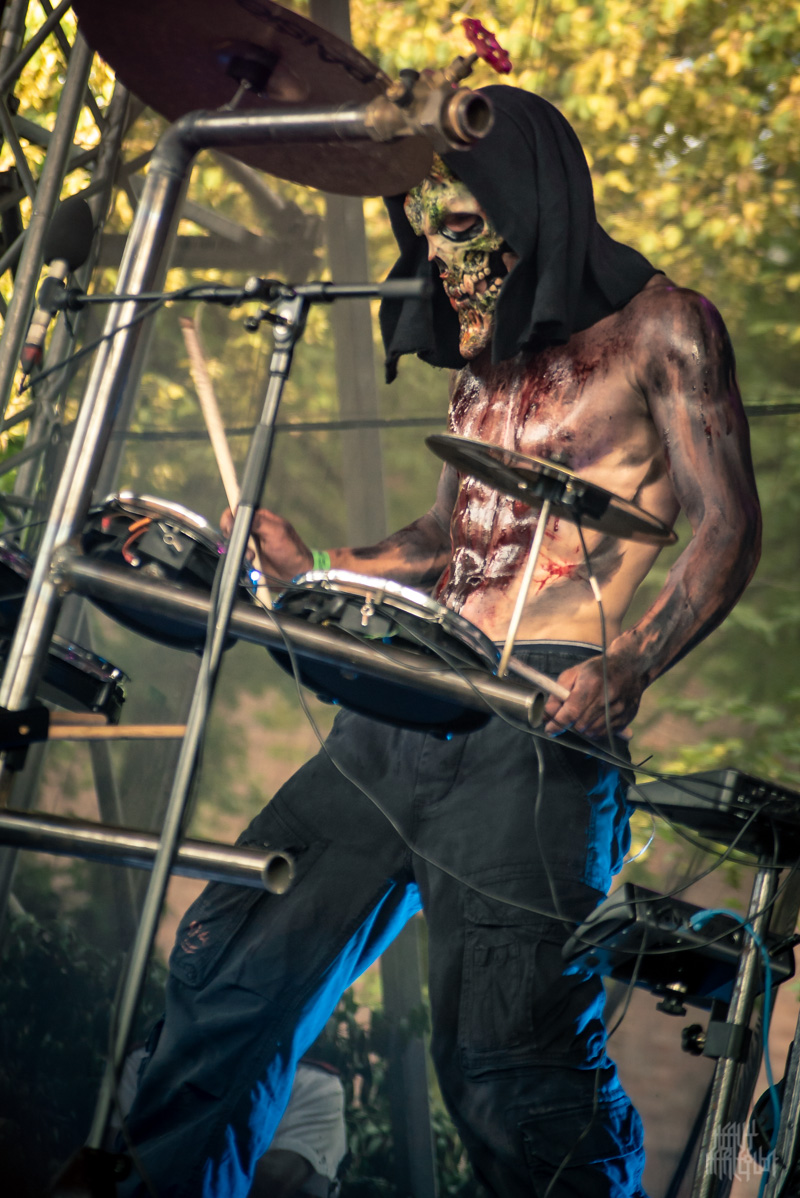 Girls Under Glass was another act we didn’t see up close but managed to hear from far behind. Considering the band’s history, it was expected that the venue was packed and full. Just 2 years ago, they decided to play shows live with the original line-up after two decades. This was almost the case in Amphi Festival; even though the fans didn’t get to experience the original line-up, they were in for a treat as the band prepared a performance with two parts. The first part consisted of the more recent songs whereas the second part took the fans back to the 80s, so it was quite the nice time machine for the band and the fans. 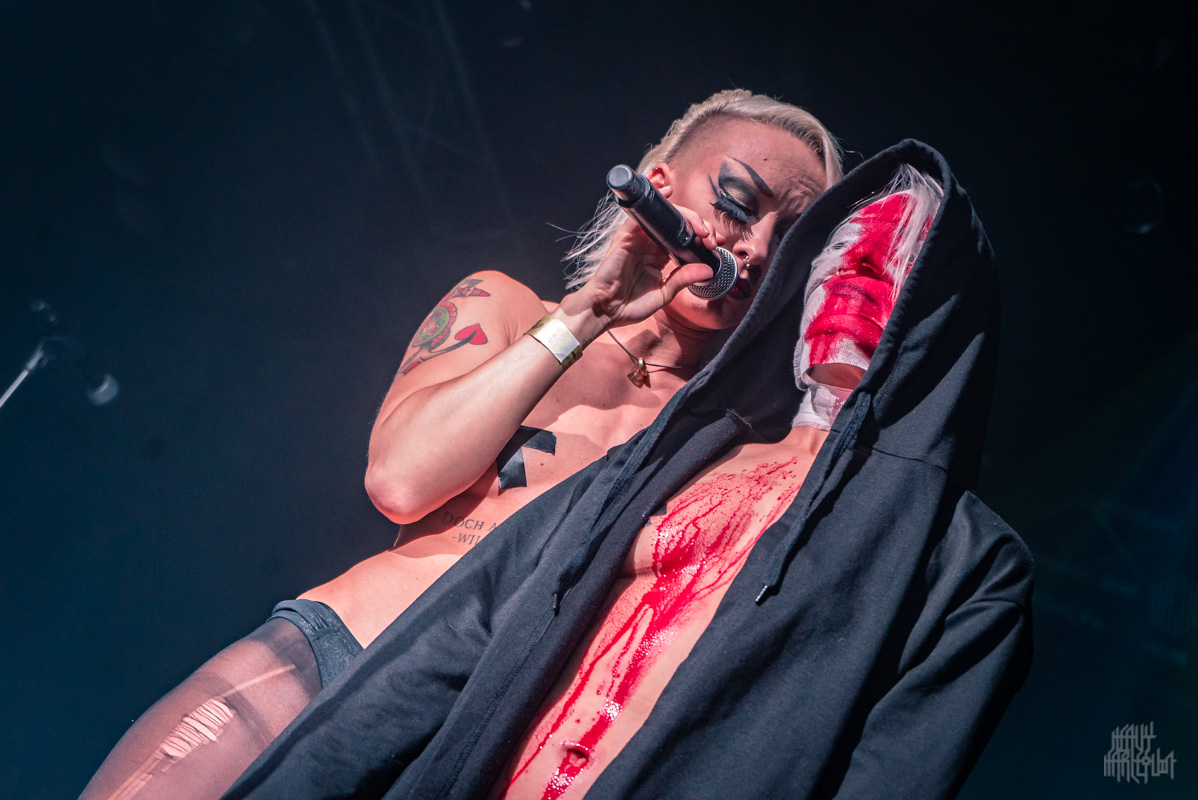 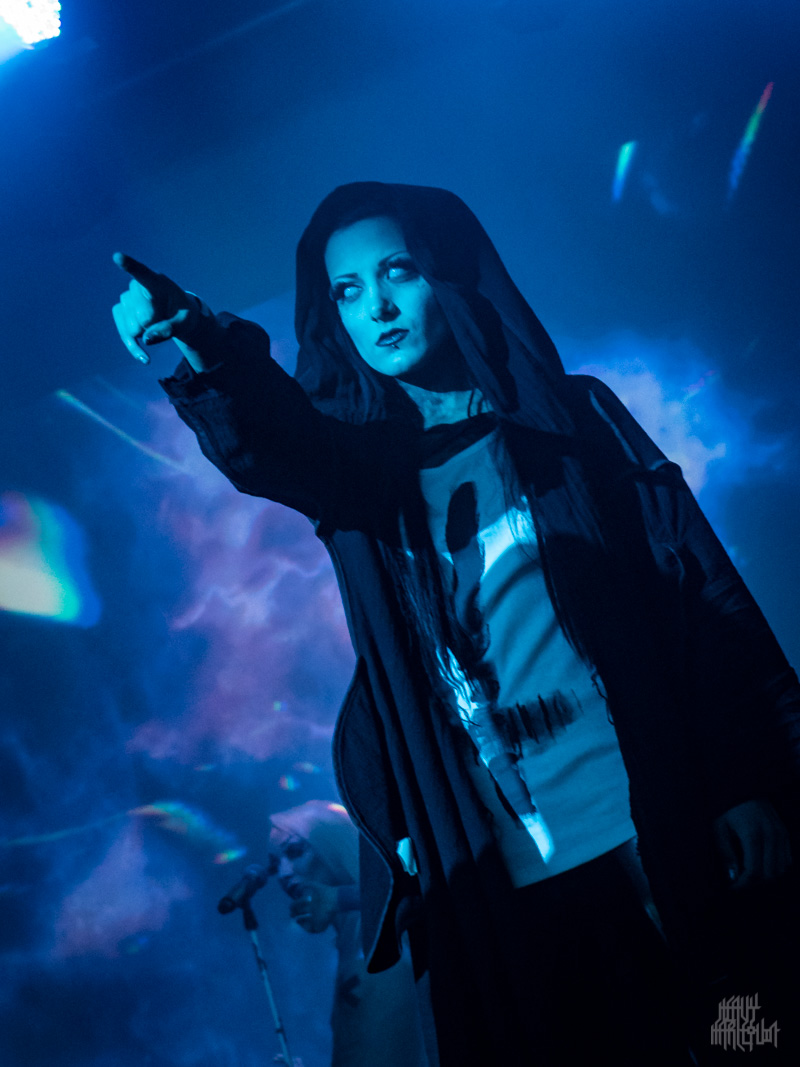 From the beginning to the end, there was nothing off about their performance nor did it feel like they were trying too hard; you could definitely tell they are professionals and know what they are doing, giving their 100% with full passion. But, one might also say they are pushing the limits in a good way and maybe make the crowd see things from a different perspective. At this point, kudos to the front woman Aranea Peel for pulling off such an amazing performance. That being said, it also made us wonder how their shows in a venue are; considering there were/could be kids in the crowd, the band probably had to take it easy a bit with the nudity and the BDSM so what Amphi experienced could be the tip of the iceberg… who knows? Personally, their music might not be my cup of tea but even I watched their performance with awe and astonishment. I am pretty sure that’s how a lot of people felt as well. 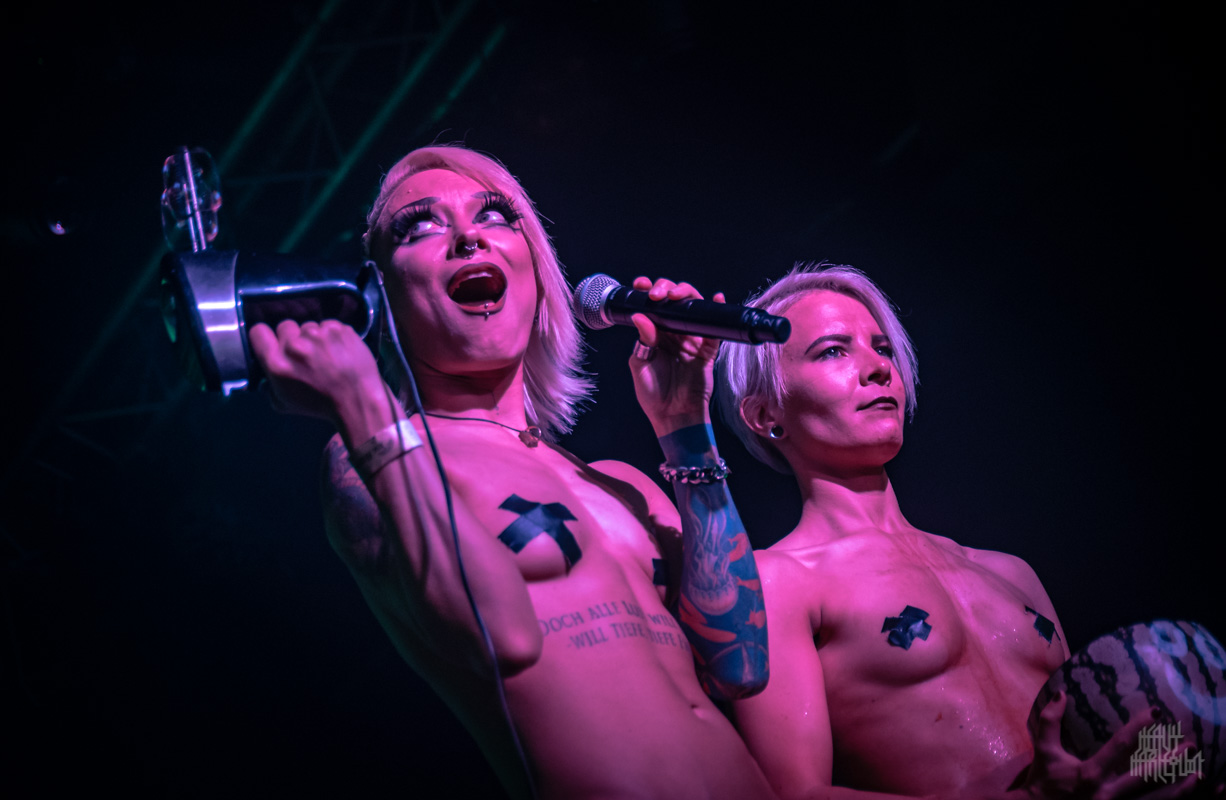 Due to personal schedules, Grausame Töchter was the last act for Day 2 for us and marked the end of Amphi Festival 2018. All in all, Amphi Festival was rather about the smaller and newcomer acts for us than the big acts this year. Despite some technical difficulties and the loooong queue at the Theater Stage on Day 1, it was a fantastic event and we surely can’t wait for next year!