It was that time of the year again! Amphi Festival opened its doors to the goths and lovers of the “schwarze Szene” from all around the world for the 14th time. This year’s line-up featured some big names in the scene but also the newcomers. 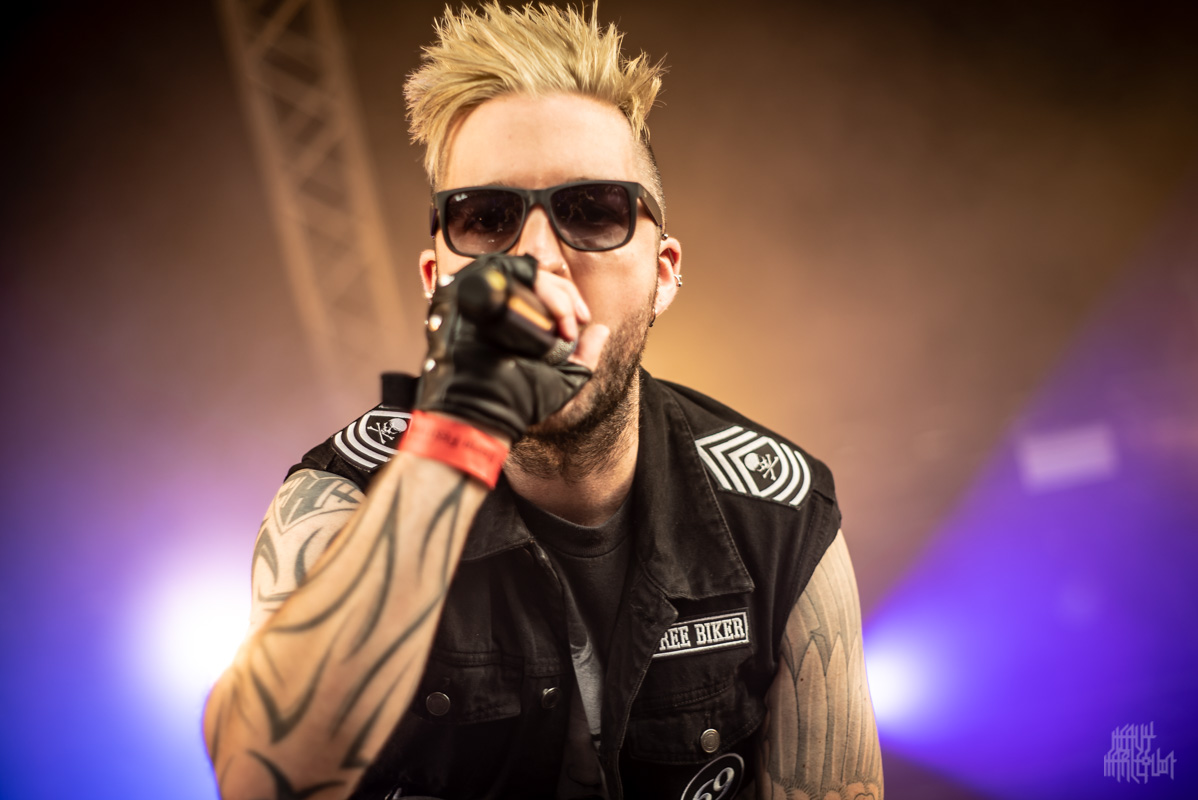 The first day of the festival started with [X]-Rx in the main stage for us. Before the band entered the stage, the fans were greeted by Mark Benecke, a known name in the scene, and let us know that this band changed their pants just for us… Well, in this heat it was expected! This electronic project was formed in 2006 and their sound is a mixture of rave and hardstyle, a nice treat for the ravers at the festival. Despite the relatively early slot, the vibe and the overall mood was great as the crowd was definitely up for it. Some ravers and goths could be seen dancing in the far back. The band also seemed to be in a good mood and so there was nothing to complain.Throughout the set, the band played songs like “Riot”, “Kein Herz” and “Crank It Up” but in our opinion, it was the songs like “Dark Places” and “Gasoline and Fire”, that kept the crowd going. 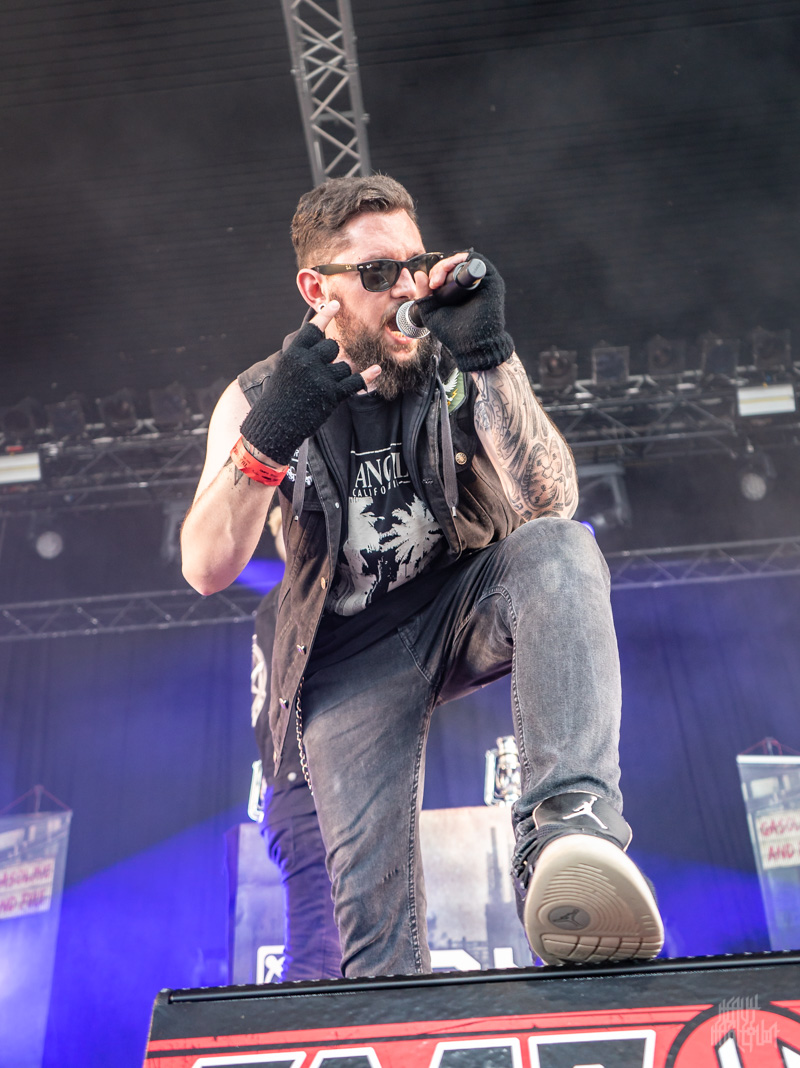 Unzucht was quite a nice and interesting change after X-rx. It was a special day for them as the band happened to have released their new album “Akephalos” on that exact same day so a celebration was on for sure! This also meant that they had the chance to test some new songs and it worked pretty well. 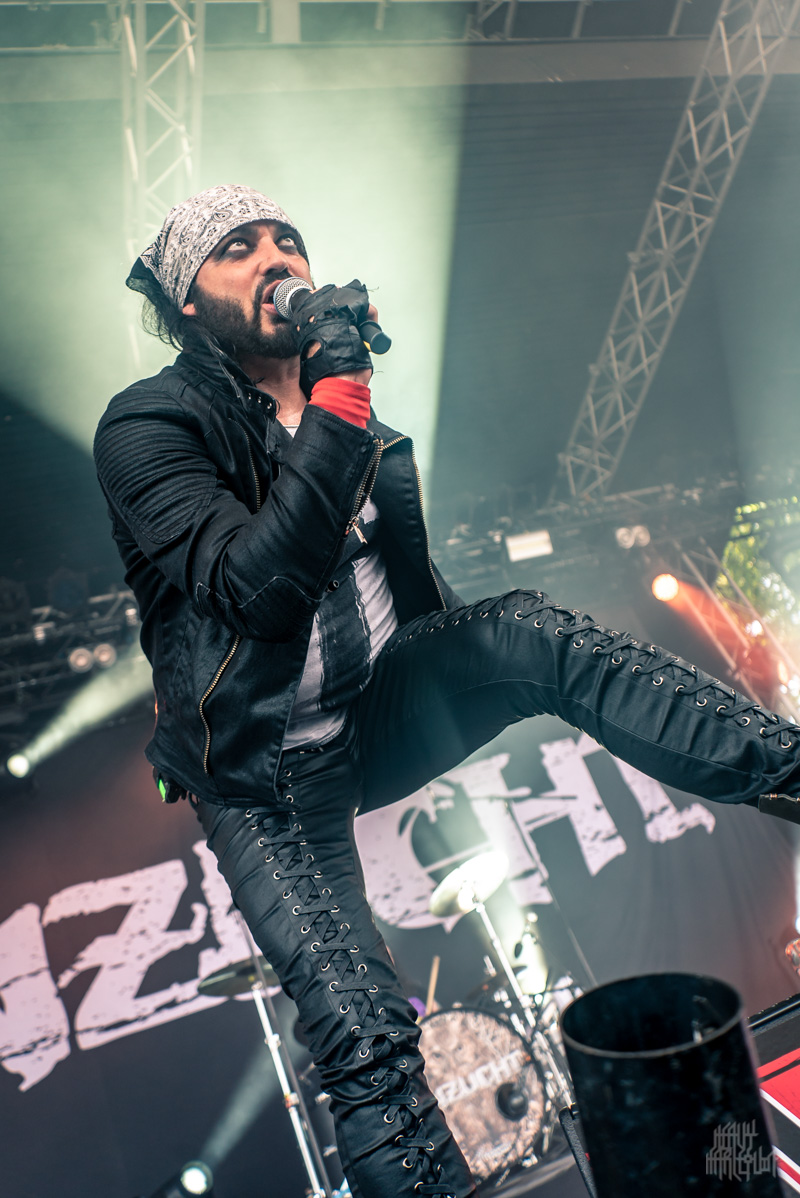 Surely Unzucht is not a new name in the scene; they were formed in 2009 and known to many who like dark rock so a lot of people were already familiar with their sound. In this context, the band didn’t have to prove themselves; their stage presence was professional and enough! It wasn’t also only the new songs that got the attention but their overall set were applauded and cheered along. This appreciation was not one-sided as the vocalist “Der Schulz” thanked the crowd many times and stated: “You have no idea how much this means to us!”. We could definitely tell they were glowing and more than happy. The album release having been on that day was surely the icing on the cake! 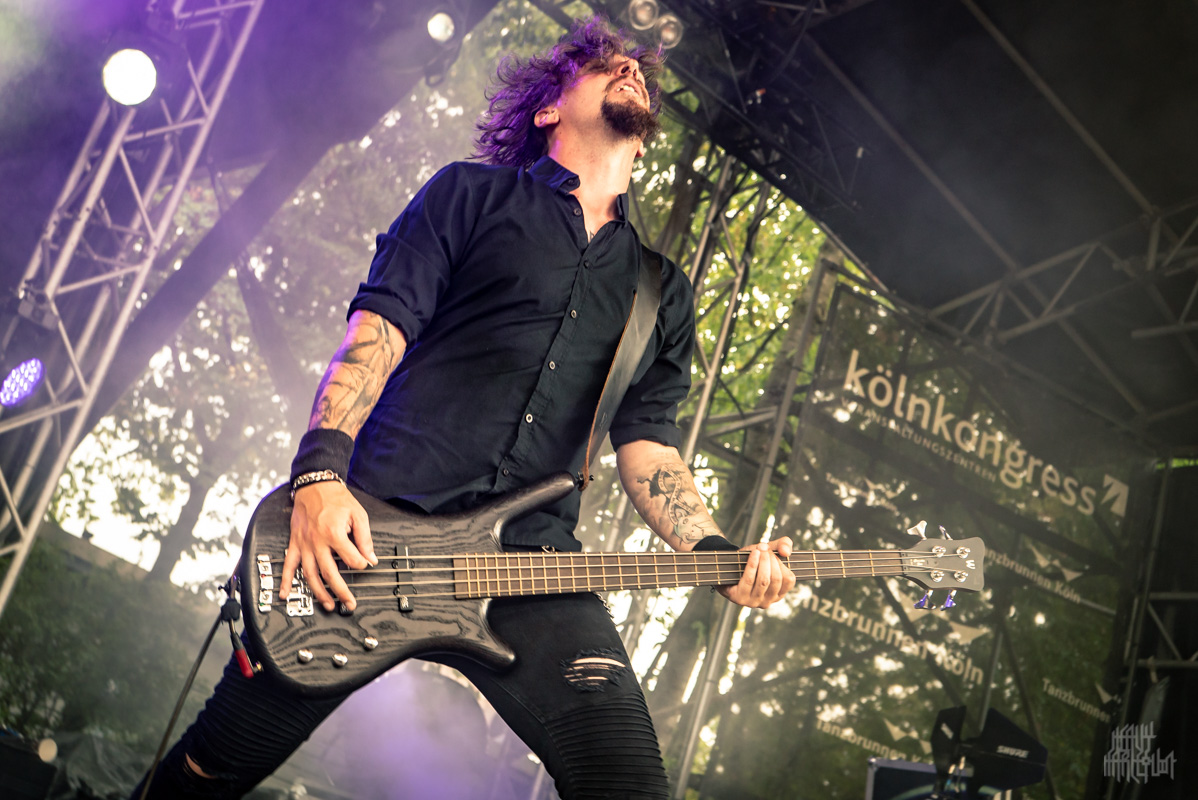 Aesthetic Perfection… A name many fans, us included, were waiting to see. Personally, I discovered the band last year even though they have been around since 2000. 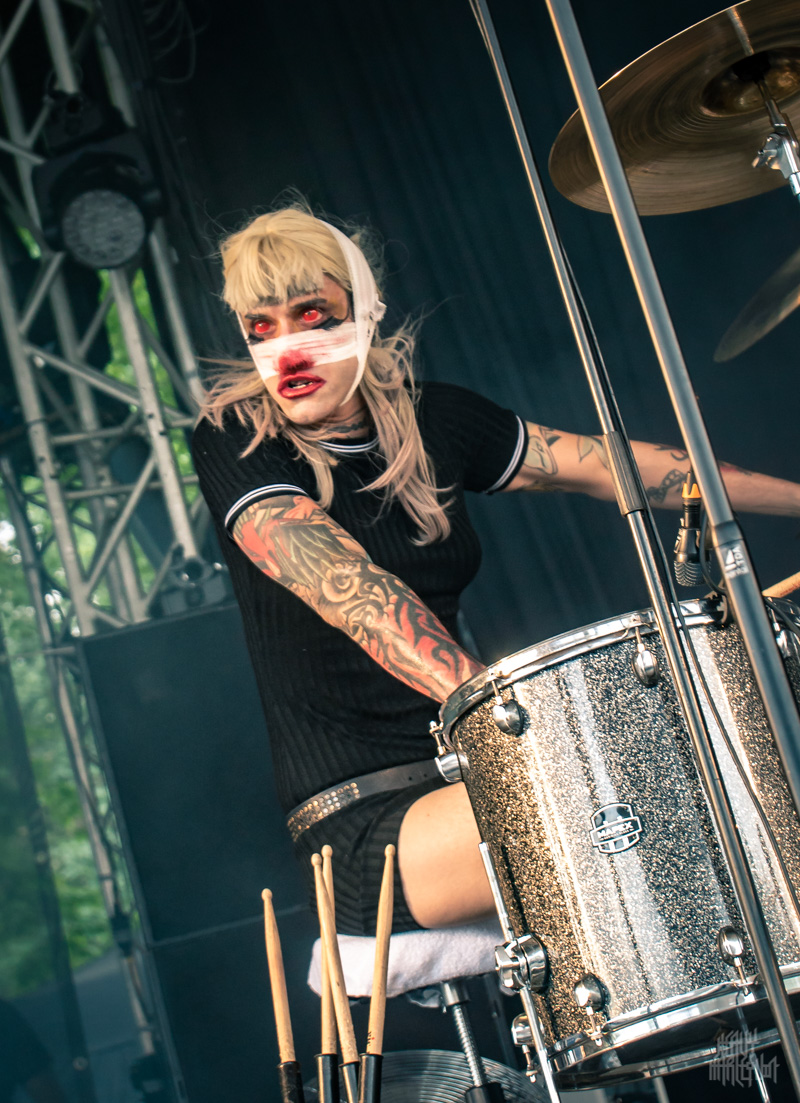 Without any introduction, the band started the set right away and set the mood straight. Their latest album “Ebb and Flow” was released earlier this year and so the fans were in for some recent songs but old classics as well. The energy was just indescribable; the front man Daniel Graves was interactive and happy as always whereas Elliott Berlin was just killing it there behind the keyboards; I was especially blown away by him just headbanging there and providing some amazing melodies for us! As for the drummer, our thought were : “Damn is that a woman or a man?”. So the show was definitely mindblowing from every way possible! “It’s good to be back” were the front man’s words as we could tell the positive energy and the familiarity was there. I also loved the nice contrast between mainstream and aggressive elements in their sound. Just perfection and one of our highlights for Day 1! 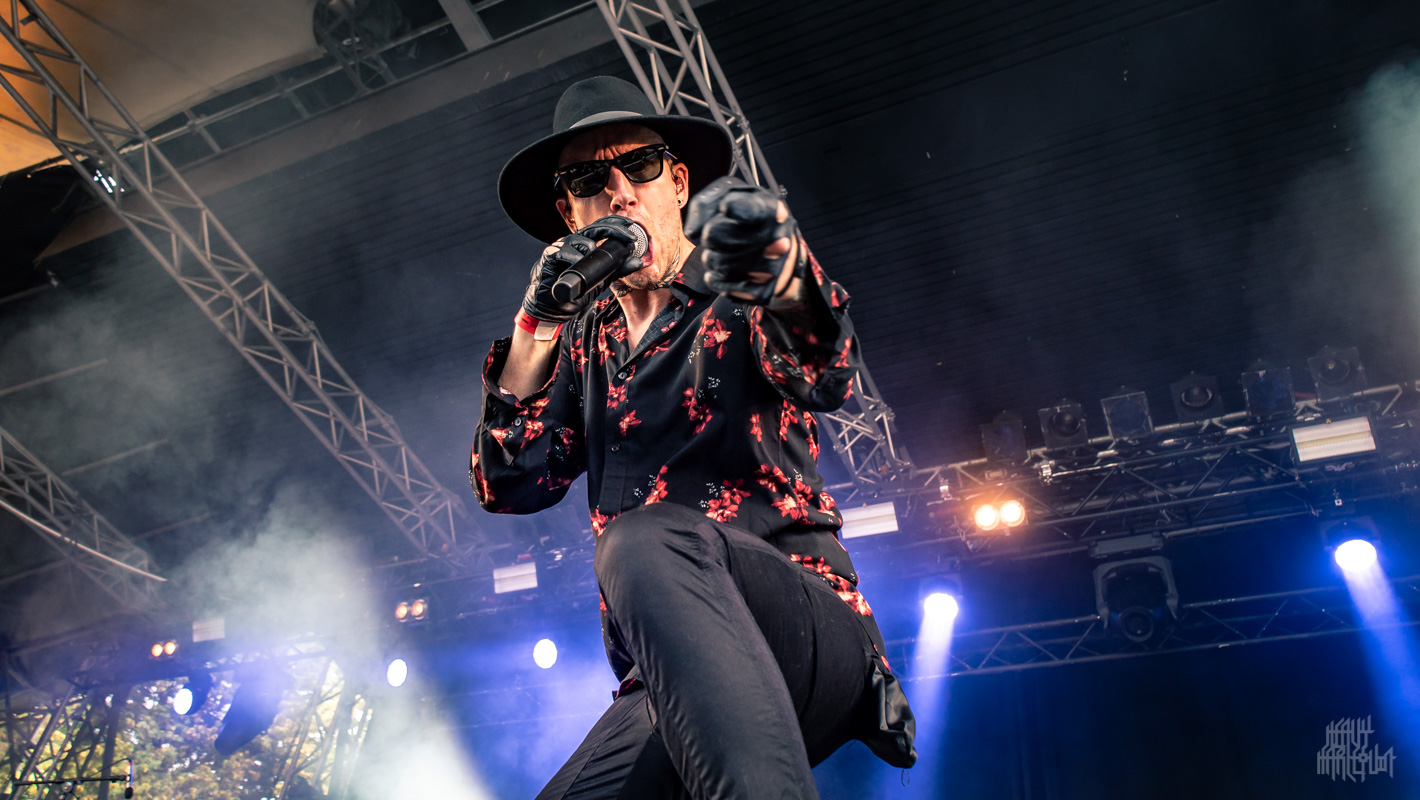 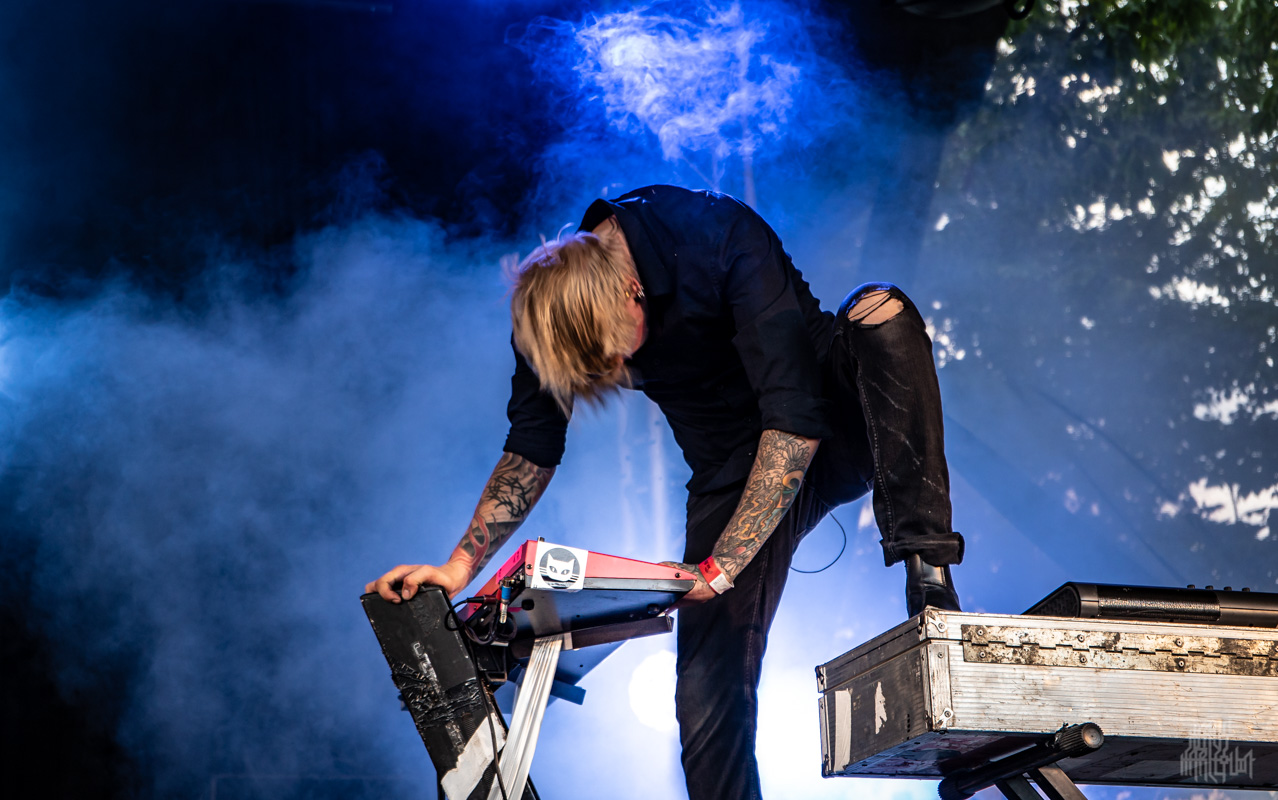 At this point, we would have loved to write something about the [:SITD:] show here but sadly the second stage was packed and it was impossible to get in… so we decided to hang out at the main stage for Mono Inc., another band that was introduced to us and whose new release, “Welcome to Hell”, was released on that same day… and surely another band with whom Amphi was familiar with. 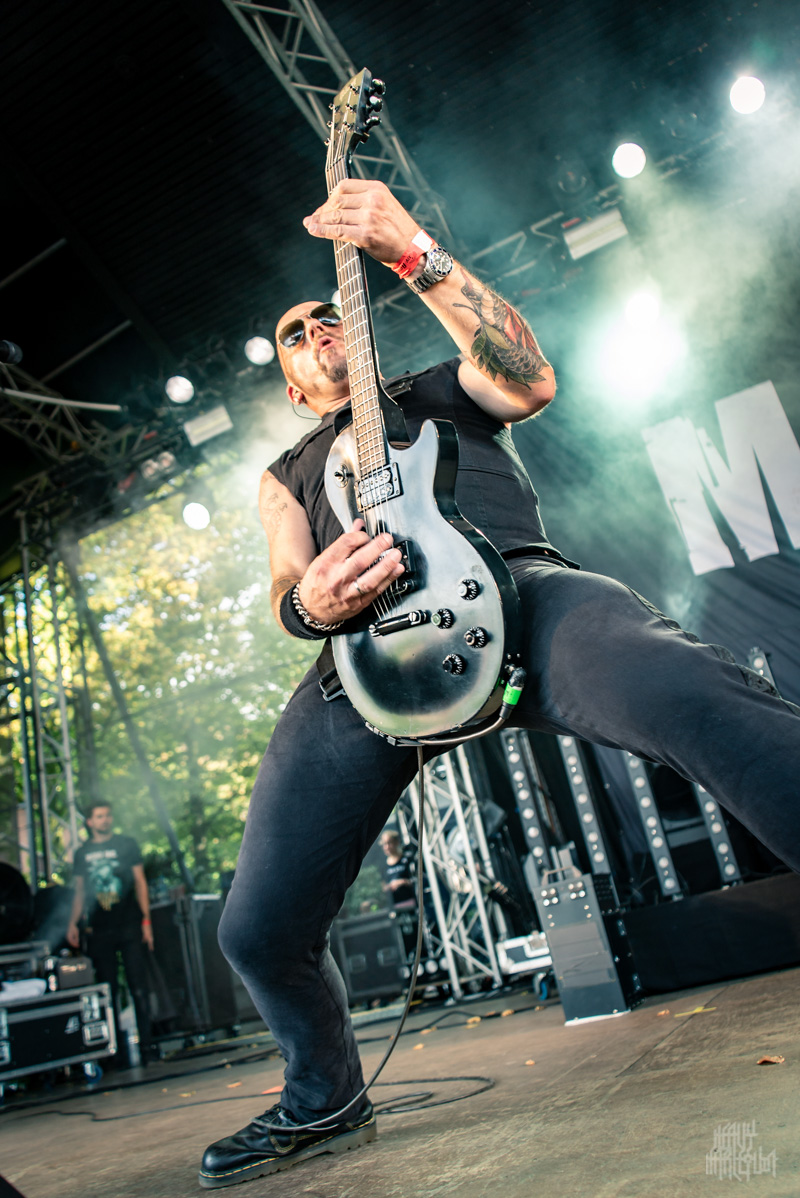 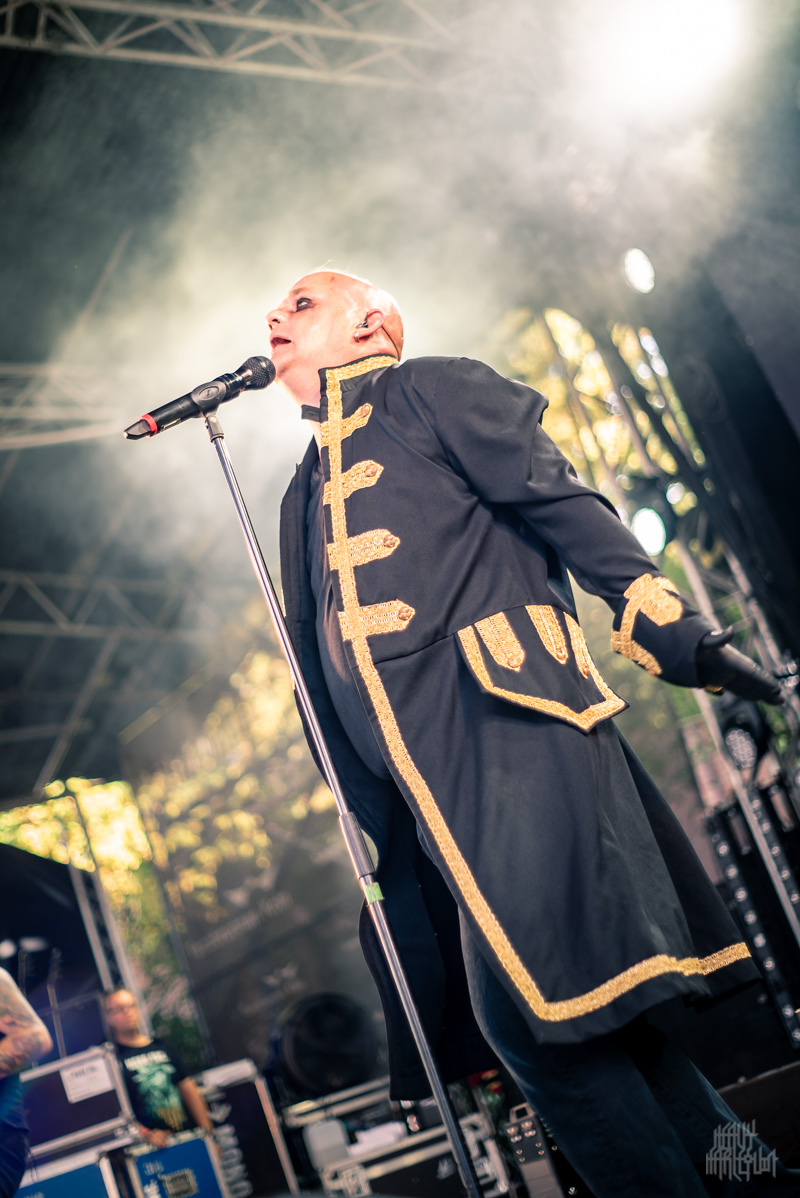 Formed in 2000, these German industrial gothic rockers are one of the known names in the scene and probably a name many gothic rock fans have seen here and there many times. Even though they had a nice start to their set, the sound got our attention as it was a bit difficult to hear the guitars and the synths were just too loud… but maybe that was intentional. Nevertheless, the band managed to make the crowd sing and set the mood from the first song, which showed just how popular and adored they were!

With the new release, the band also announced that they would have a special edition for the fans at the festival and of course a bit of spoiling the crowd with the new song was also part of their setlist. Apart from this, one highlight was the song “If You Get Some Sleep”; turns out, the song has been 10 years old already and it was the last song they played at their first Amphi Festival. In that context, some emotional moments were also shared between the front man Martin Engler and the crowd. So not only was it a great performance but a special and maybe an emotional one for the everyone included. Personally, it was my first time seeing the band and I was especially pretty impressed with the drummer Katha Mia, who did not only kick ass with her drumming skills but also with her great vocals… a bit versatility is always appreciated! 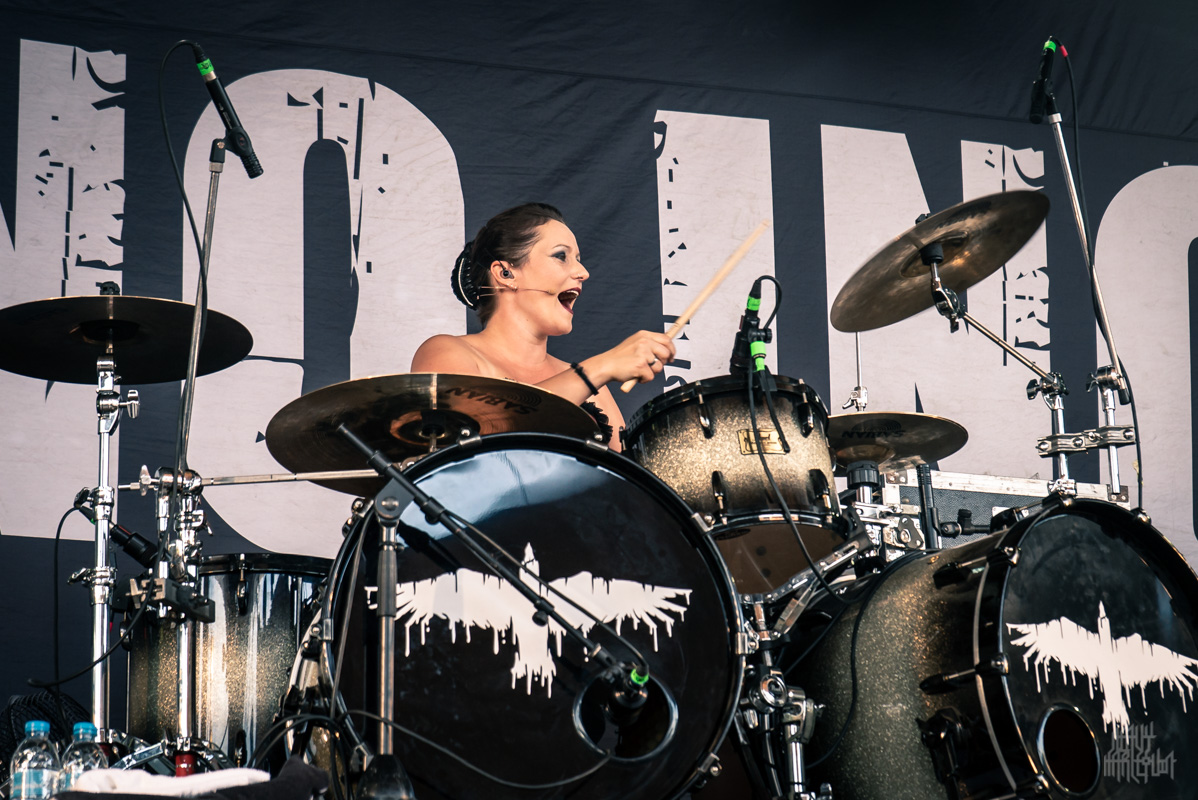 It was time for us to have a bit of change and so we headed to the Orbit stage. This year, the orbit stage, which is in a ship around the festival area, had to be moved across the festival area since the water level at the Rhein river was not high enough… sadly. But the organisation was superb and shuttle buses were arranged to bring the fans to the other side.

Lebanon Hanover was a name we heard in the scene and actually missed the chance to see live last year so their show at Amphi Festival was a great opportunity. Formed in 2010, the band has a lot of releases in their pockets with the latest one “Let Them Be Alien” that was out earlier this year. 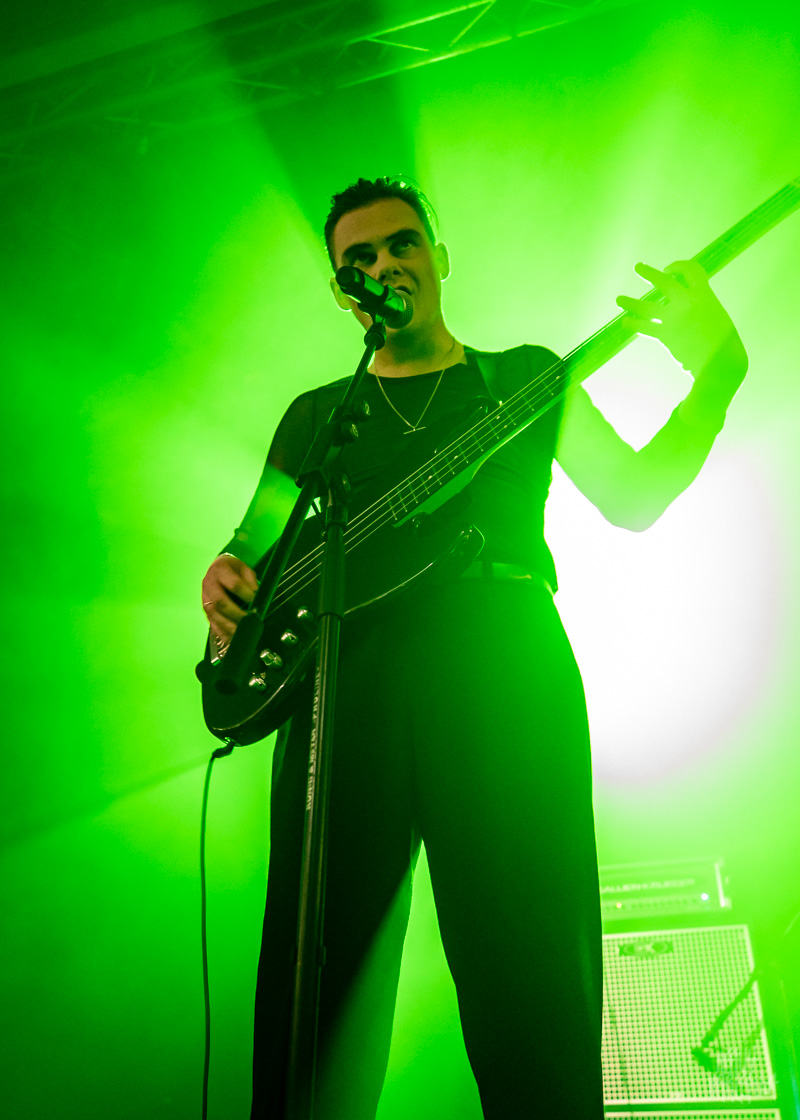 Even before the band started their set, I could see that a lot of people gathered. Considering the size of the stage compared to the other two big stages and the hour (well… headliners are always adored the most), I was pretty impressed and surprised. I also have to say that their dark-wave sound was an interesting change after the energetic and positive industrial/gothic rock atmosphere. As you might guess, when we are talking about the dark-wave sound that is heavily influenced by the 80s, sadness and melancholy is the main theme… and so this was the highlight of the show. There was no interaction with the audience but just the melancholy, which could be felt in the band members’ posture, their black clothes and their songs… well maybe except the last parts of their set where William Maybelline put his guitar aside and just sang and dance. Overall, this is how they are and how they reflect their music. Is it a bad thing though? Hell no. Definitely a treat for the dark-wave fans. 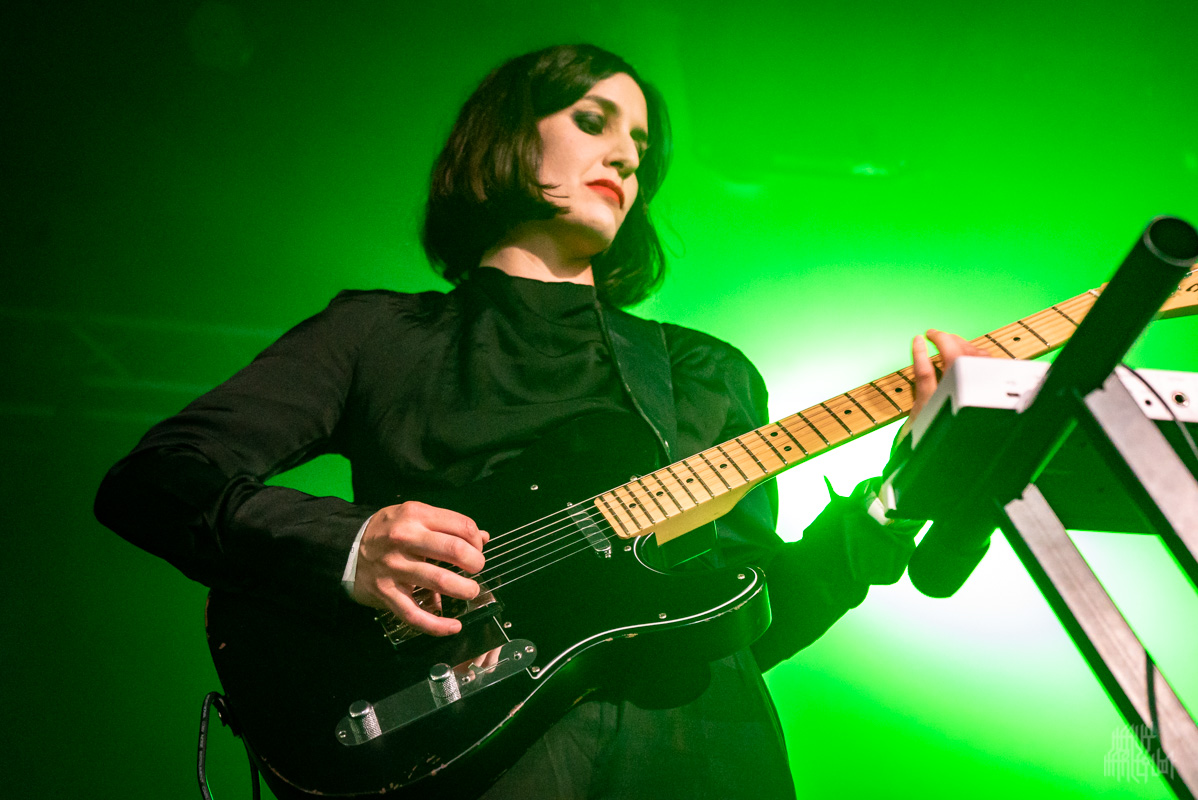 Our adventure for day 1 ended with She Past Away as the headliner in the Orbit stage. Another known name in the post-punk/dark-wave scene, this Turkish band was formed in 2006 and they have two releases so far. 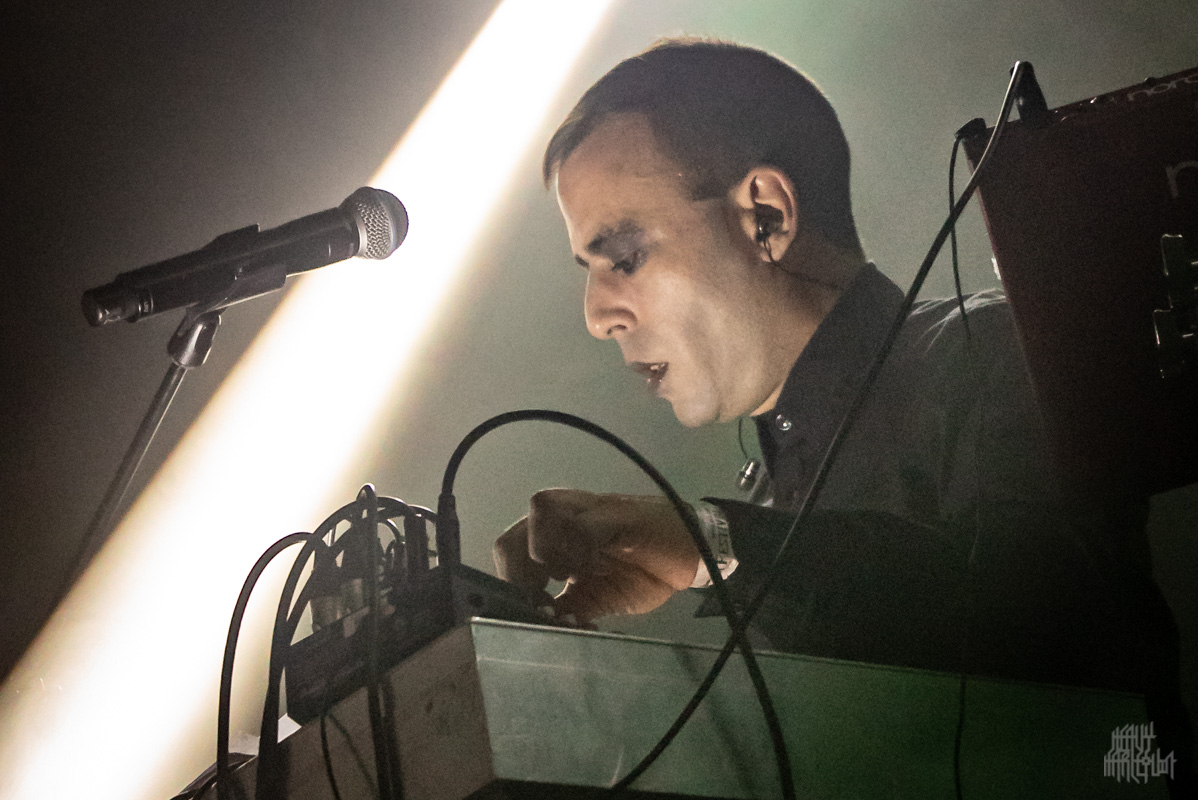 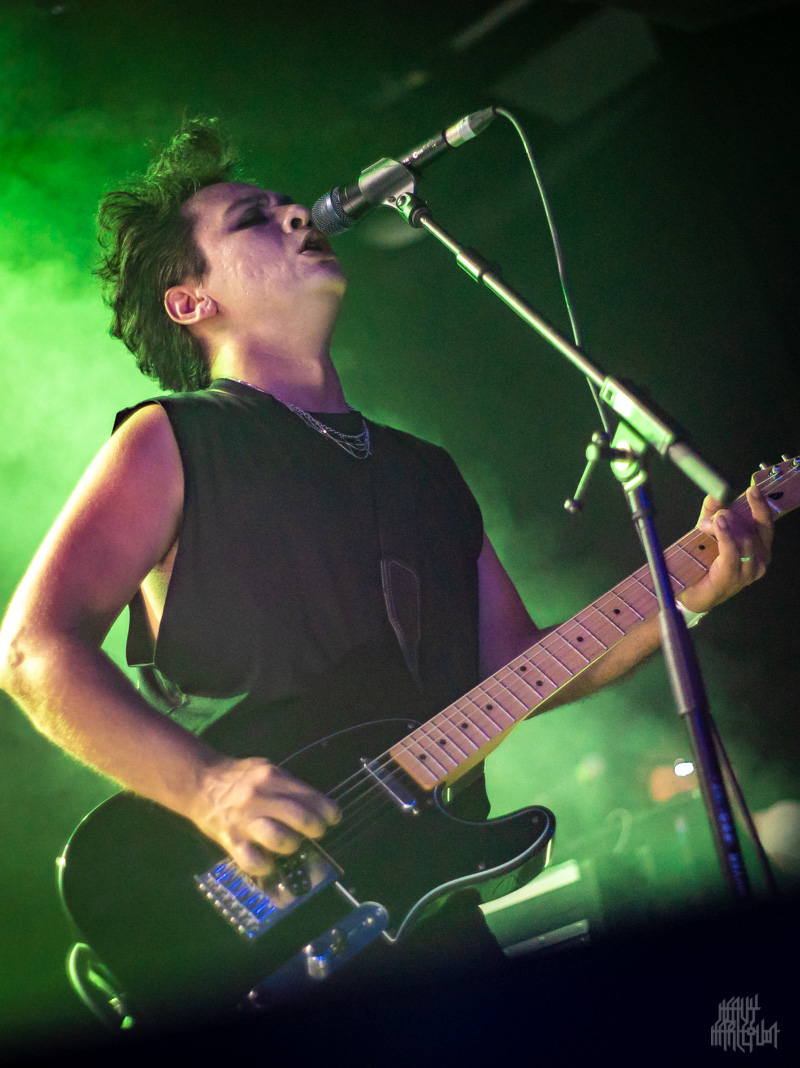 As with Lebanon Hannover, She Past Away is also known with their dark and relatively ‘melancholic’ themes in their music. But one could maybe tell that one difference is also their presence and energy on stage. Surely the sound is dark but also makes you wanna dance. Throughout the set, this duo managed to entertain the fans with some classics like “Sanri” and “Kasvetli Kutlama” and also surprised the fans with 3 new songs from the upcoming album, which was celebrated pretty well! That being said, the band also gave hints of the upcoming album which got the fans even more excited. 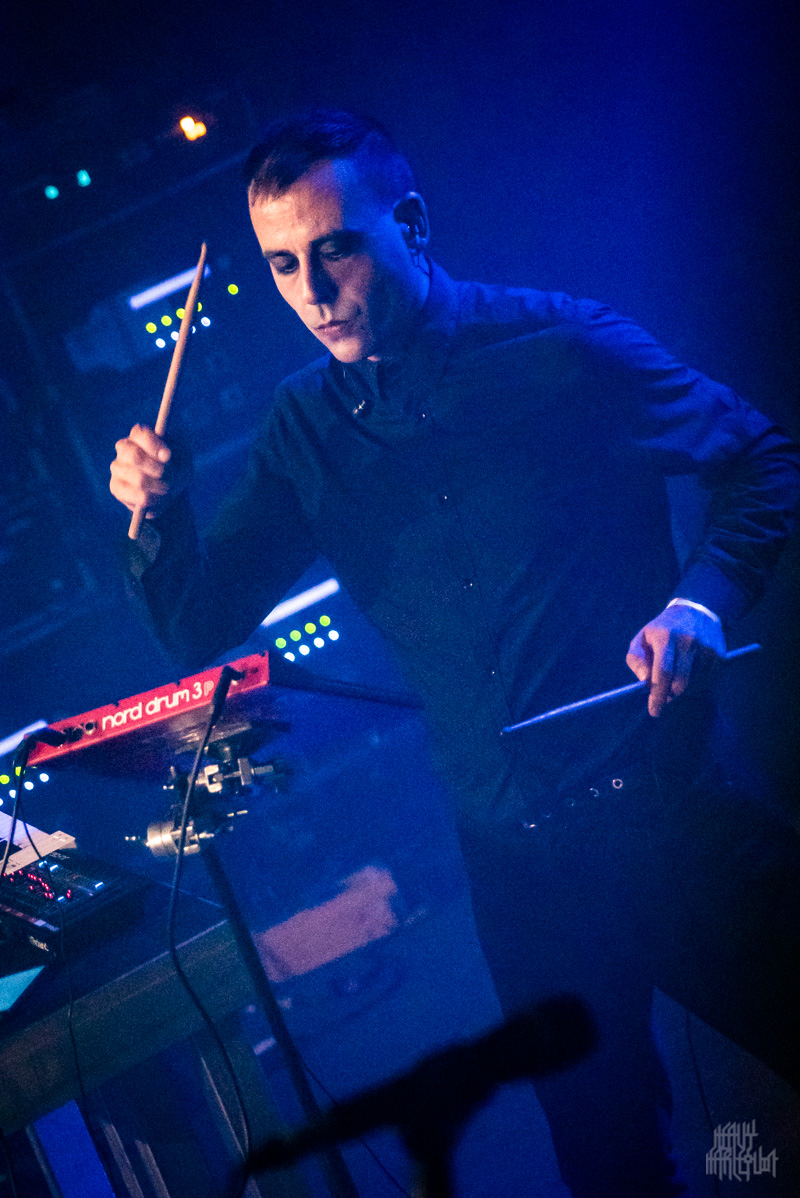 As a Turkish person and fan, this was my second time seeing them live and I even felt more proud of seeing them in the Amphi Festival with a dedicated fanbase. Such an amazing end for Day 1!