At Bar Loose, after Emergenza qualification round and hearing that the band proceeds to semifinals at Nosturi

Blame Tom is a very energetic alternative rock band from Finland. Their charismatic and powerful female singer combined with intense live show and catchy melodies are the reasons we decided we want to talk with them.

R: How are you feeling? 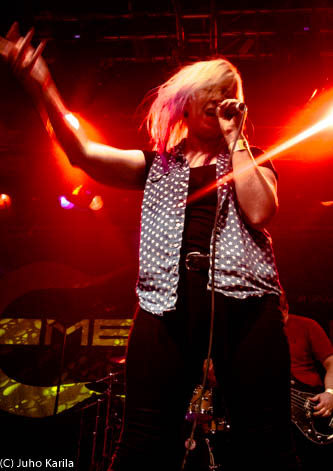 B: I’m really good and it’s just incredible that we made it to the semifinals. Totally unbelievable and just when we’ve just started playing gigs with the band, so this is just really awesome. The mood was high and we had a good energy on the stage and the audience also felt it and it is really great.

J: I’m incredibly positively surprised, because I had prepared for we don’t make it, because anything can happen in here… So I got kinda euphoric feeling when I heard that we’re going to the next round.

R: Ok, how long have you been together and where did this idea came from?

J: Well, originally the band started by playing Paramore covers and then this Tom, who’s to blame for everything, began to write his own songs and that’s how the band started evolving. After a while I joined the band and brought my own visions to this and here we are now.

B: And slowly we’ve found our own style etc.

R: What are you doing? What’s coming up? I mean, besides Emergenza?

B: Well, now for starters we’re going to get our songs recorded and we’re gonig to a studio next month. (In May)

J: Yeah, first we’ll do proper studio quality songs and then we’ll go out and see how far we’ll ever get.

R: Then, I could ask that what kind of expectations and goals do you have? 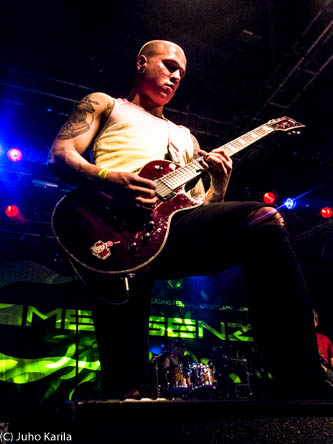 B: Of course conquering the world is the primary goal (laughter). But doing more gigs and playing on festivals would be nice while we’re at it, and getting more visibility with our music and doing some music videos and so on.

J: Mmh, first we’ll conquer the world and then I could try to be statisfied to some of our songs (laughter). I’m quite demanding with those.

R: Then how about the songwriting process, who does and what does?

J: I have this small bedroom studio where I sit and jam and see if I could get a catchy chorus. And then I start building stuff around it and then we refine it together and that way these are born.

B: So, first the boys do the song structure and then they shove it to me and I’ll do the singing melodies and lyrics. And then we think about it for a while and arrange it to make it work.

R: Yeah, sounds kinda like co-operation. Can you name any influences / sources of inspiration?

B: First we’ll mention the Paramore because this band started from that cover band. But we got other influences too, from there alternative-rock-punk axis, all the way to Bring Me the Horizon.

J: Yep, I don’t dare to name a single band, when I listen to them and the influence comes from here and there. 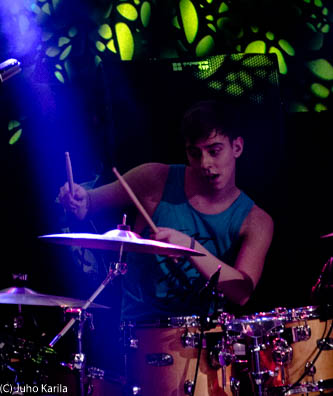 R: Of course, always with songwriters but do you have anything how the intrest to music begun? That when / at what age did you realize that you want to be there up on the stage?

J: I was 12 when I got my first guitar as a Christmas present, and it actually lighted a fire that I never got enough of it. Was born an infinite love towards it and it has just continued ever since.

B: My mom’s career as a singer has actually been that kind of an inspiration to me. And when I found the connection to rock and metal music in junior-highschool, I really started getting those feelings and emotions from music. When I got to the first live shows, I went to see some Alice Cooper, Sentenced and I noticed the wonderful feeling out there at those live gigs. The feeling of belonging and that was when I started thinking that those stages are where I wanna be on.

R: Then the traditional, Blame Tom, here you go. The word is yours, what do you wanna say to your fans maybe, to someone who heard you for the first time today  perhaps?

J: Well, we’re trying to play every gig pedal in the metal and convey this good energy to the audience, so I believe we’re fun to see live.

B: And we have our own Facebook -site, Blame Tom, and there will be our own material within couple of months and following the site you’ll get to hear those songs.

R: Now that Emergenza is over, what are your feelings about the whole trip?

B: Emergenza gave a great opportunity to try our music on larger stages. Festival also gave possibility to get connections to other bands. 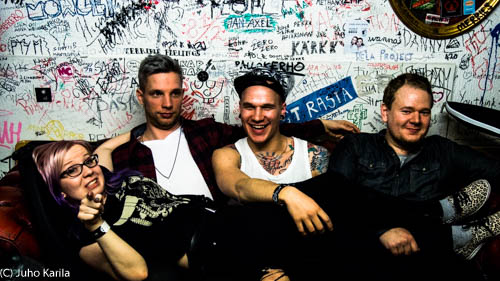