Ankkarock is one of Finlands most well known festivals. Every year, many Finnish but also international acts playing on the festival. In my opinion, This festival is the best organized festival I have been to and I have seen many! What makes me say this? Well, Ankkarock takes good care for his visitors. For example the fact that you can bring a bottle and fill it with water on one of the many waterpoints present on the terrain. When the sun is burning on our heads and the temperature reaches 30 degrees celcius (yes, that IS possible in Finland!) the security cools the audience down with a garden hose. EHBO runs all over the festival terrain to check on people if they are ok. If the line up interests you, I can only advise you to go there next year!
You will enjoy it! 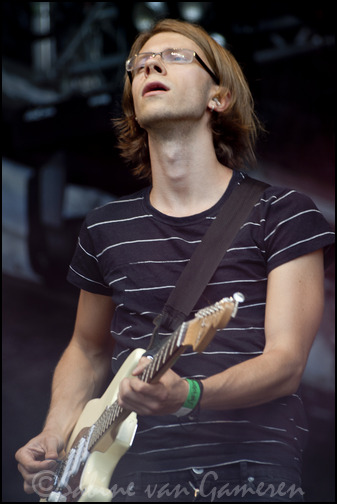 When entering the festival terrain I  immediately came for a huge inner-war. Poisonblack and Rubik were about to play at the same time!

I choose to see Poisonblack, but when I found the “Rocklava” where Poisonblack was about to play I found an empty stage. That does not look very promising! Unfortunately one of the band members was sick, so they had to cancel.
Let’s go to see Rubik then! Rubik is a young, but very promising band. They make some indie rock music. The music is interesting to her and the stage
act is more interesting then other bands in this genre. There is so much going on. Vocalist Artturi Taira is making a deep impression on me. His way of singing keeps my attention. Besides vocals, this man also handles the guitar and keyboard.

All together this band shows that they are on their way to the top. Before Ankkarock they played on the European festivals Eurosonic (The Netherlands) and Europavox (France) and right now they have a tour coming up through United Kingdom. Also they have been playing with Mogwai, which they not yield to! 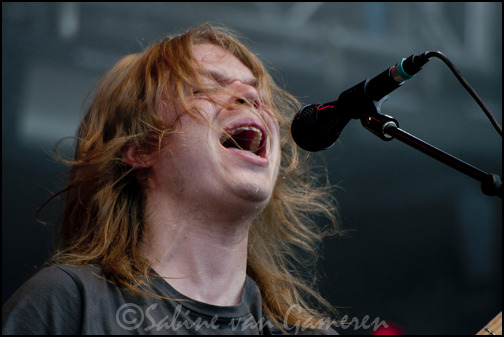 After seeing Rubik I took time to climb up the hill again to see The Bellrays which came all the way from United States. This punk/soul band surprised me more then ever. I really had no idea what I could expect from them. Especially the soul side in the music is something which is not often heard. The band remind me a little to the UK band The Noisettes. Their performance is also nice. Singer Lisa Kaukala makes the big stage look small. She is everywhere to show her skills.
As only remark I can make that the drums are a little soft. I wonder how this band would sound with a little more aggression in the drums. It seems like the fans enjoy their selves anyway. I saw some people dancing out there! 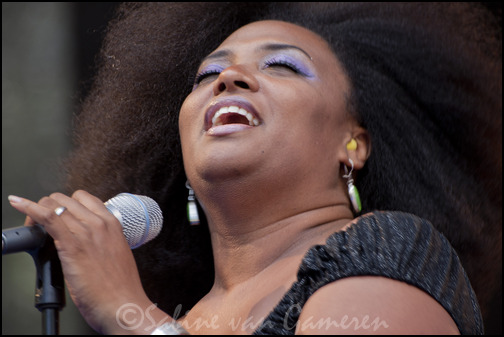 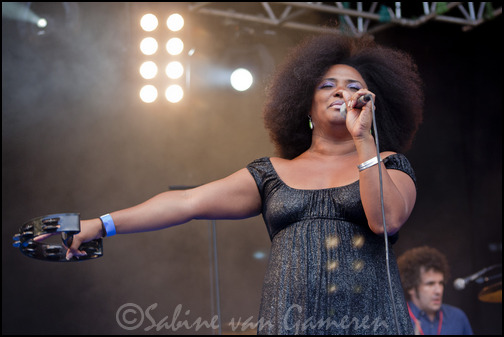 At the biggest stage Zen café is about to enter the stage. This band gained loads of success in Finland during the years. Unfortunately, all the songs are in Finnish and the music itself does not attracts me at all. It is just some ordinary rock band. As a stage act, I see quite some activity and the audience seems to appreciate this band double as much as I do. I think it
is the language which makes is hard for me to like this band. I could not stay much longer than a few songs, it bores me. 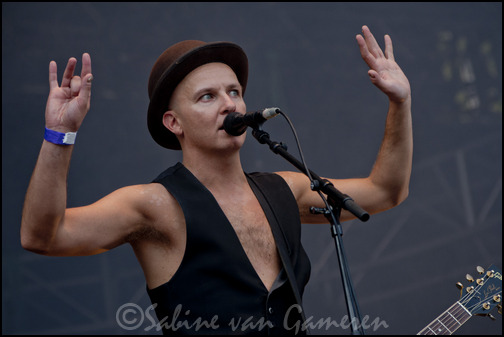 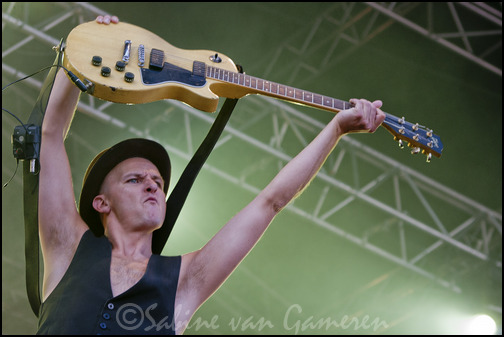 Luckily, it did not take long before something more interesting plays at rocklava. It is Von Hertzen brothers, another Finnish band which plays already since the 1990’s. Their music sounds way more energetic then Zen café. Alternative is the perfect name for it. The way the songs are made make me think of keane. Those typical songs which catch you and stick in mind for the whole day or may be even a week. Especially the guitars and the keyboard parts are outstanding. This was the first time I saw the guys live, but I feel busted when I notice that I am kind of moving on the rhythm of the music. Too less to call it dancing, too much to call it just watching. When closing my eyes I feel the music. The message which the Von Hertzen Brothers comes clear to me. A delightful musical experience. Definitely a surprise! 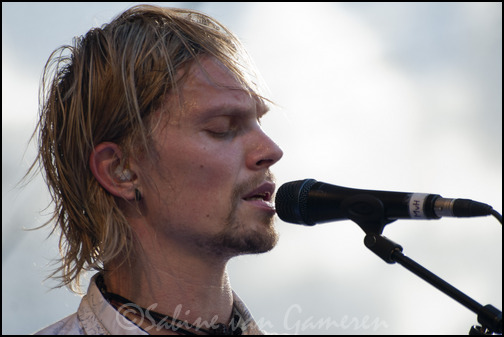 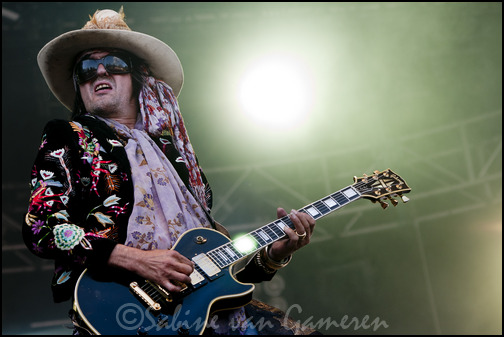 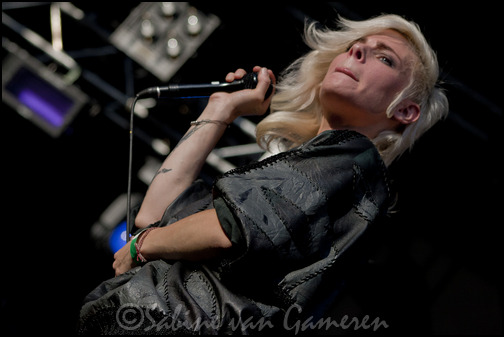 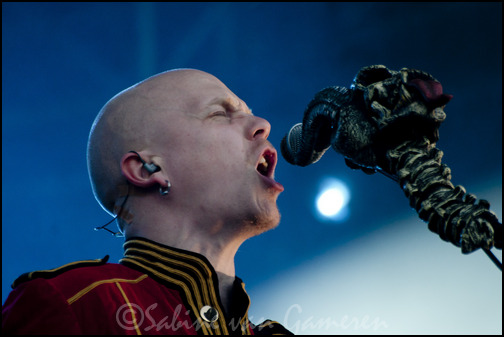 As final band of this first ankkarock day, The Dutch band The Gathering came to Finland. This is the last performance this band will ever do in the line up they are now, singer Anneke leaves the band. Because of this news fact, fans from all over the world traveled to Ankkarock to see this band. Some of the fans have been waiting at the front row all day long. Also, some of them brought flags of their home country. Musically, The Gathering is a well respected ambient/rock/alternative band. There is not that much movement going on at the stage. It tends to be a little dreamy music. But I managed watching them for a while. Last chance to see them, so I felt like I had to. Most attention goes to the beautiful Anneke, but also the bassist Marijke is doing a great job. It seems like she is leading the band to the next level. Whatever the next level might be. This goodbye gig is an end for one but the start for another one. The gathering already had quite some vocalists and I am sure they will find another one. As it seems like the fans trust this band to continue making good music so they will find their way! A lovely, lightly emotional ending of the first Ankkarock day. 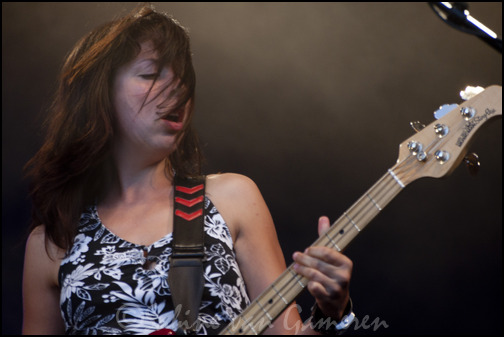 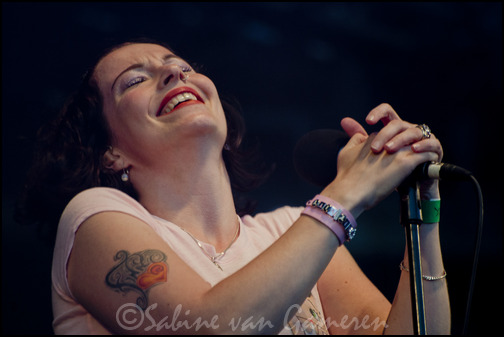 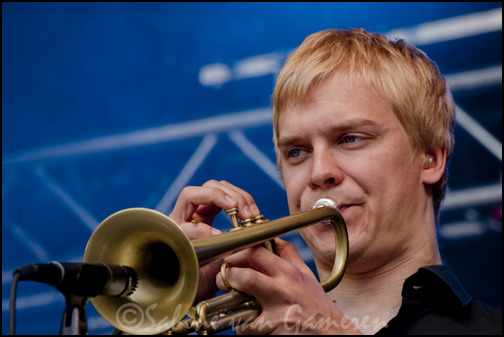 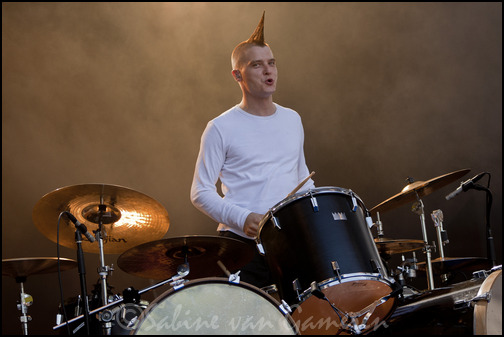 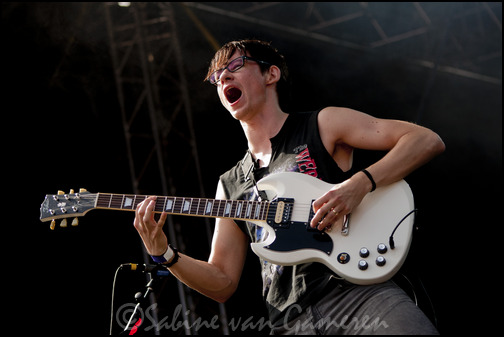 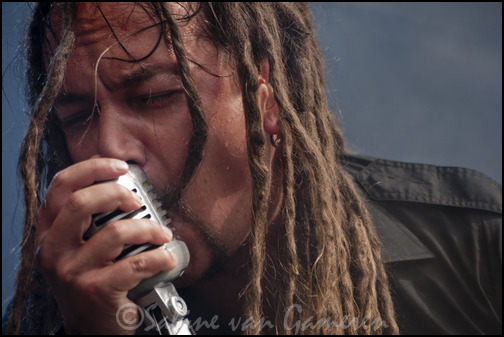 A band which I had never ever heard of before was Mando Diao. One of my colleagues, also present at the festival talked me into seeing them and so I did. Mando Diao is a Swedish band, which I don’t know what to think of. In some way, I liked their classical rock sound, but in another way I think it sounds a little boring. If you listen carefully you hear some influences from bands like Joy division and The Kinks. I like that, but when I compare it to other bands who have the same influences I think this band did not take the essence of those classics in their music. I feel like I am missing something. Maybe it is the
keys that were not really present during the gig. I could not hear them that well. The guitar and the vocals were a little too loud and overwhelming the essential keyboard sound. Too bad. I think this band can do way more then they showed me today. I hear the potential, but unfortunately it did not show of very well. Next time, convince me guys! 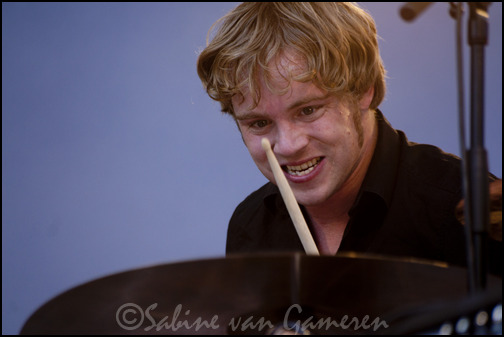 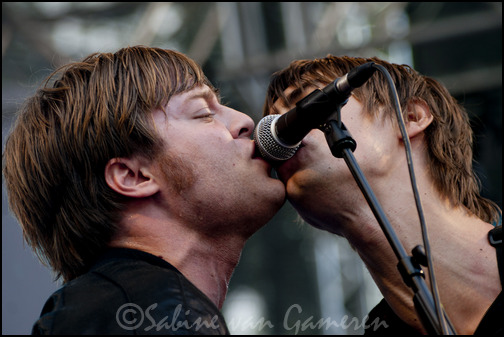 Finally, time to see the 69 eyes. Many, many fans have been waiting for this moment already hours before the festival terrain opened. When the finally entered the stage an enormous noise from the audience which perhaps could be heard at the other side from the festival terrain as well. The 69 eyes are one of the biggest exportbands from Finland nowadays. With their success all over the world
are “The Helsinki vampires” definitely one of the mainacts this day on ankkarock. For those who don’t know this band, The 69 eyes make doomish gothicrock. The singer, called Jyrki69, have a deep dark voice. But it is not only the singer where the youngster girls are screaming for. Drummer Jussi69 have just as much fans. During the gig they do not only play their big hits from earlier album, but also songs from their latest album “Angels”. It seems like The 69 eyes unite people. Many people from everywhere are there to rock out in front of their heroes. In my opinion these guys are a little bit too hyped. They are definitely doing a great job, but the attitude of these gothic rockers is kind of worthless. But why should they care? People love them anyway. A perfect festival act I would say. 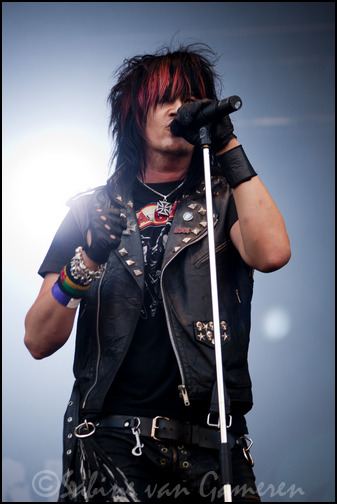 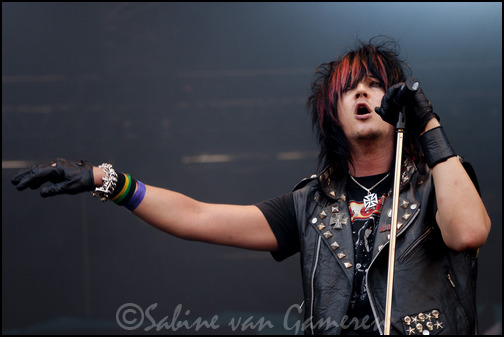 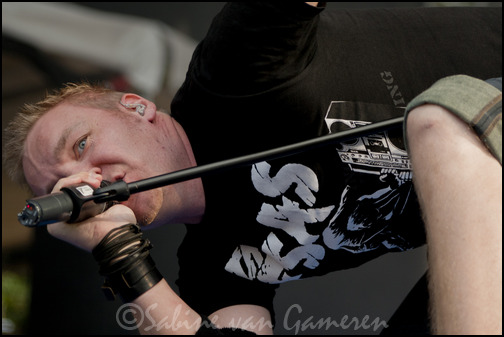 Lapko is a band which actually had to play earlier this day, but changed place with Mando Diao. They are pretty alternative. Singer Malja has an very interesting voice. It’s not a voice you hear quite often. When seeing them live, it sounds a little different then when hearing their cd’s. But actually, I liked it this way a lot. Lapko perfectly got the people with them. People were singing along
and showing their appreciation. Yes, Lapko did a great job today! At the end of the gig, many people leaves these great Finnish musicians to make sure they have a great spot at one of the last bands. Which were Nine inch Nails and PMMP.
I rather stayed until the end of the Lapko gig and I enjoyed it. 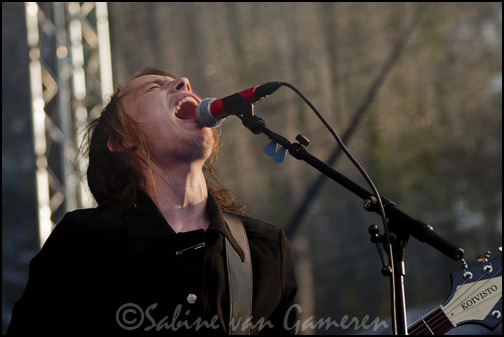 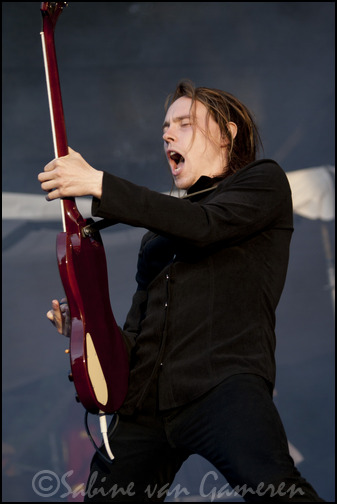 Then I found out, that Nine inch nails has such a large audience that I would not like to join the people so for me this festival is over. I already look forward to next year, since I highly recommend this festival to all of you who are interested in the line-up. This festival is great!

Keep watching this website to see interviews with Rubik, Poets of the Fall and Sonata Arctica!