Matt Hart was doing a DJ set on the night before but today it was his duty to open the festival. He came from UK and has been seen all over the festival before. A prominent figure that seems comfortable on stage here. He is not alone here, he has 7 stringed axeman along to bring some power into it. Some good visuals behind them are enhancing the live show as well. What jumps to notice in the set is the building towards different intensity levels. Never going to abrupt and in your face but always taking your hand and bring you along. A nice opening of the night!

It has been a couple of years since we saw Ruoska last but the Finnish guys are eager to play. Some dedicated fans are early but the band is not drawing a full house yet, so early on the evening. To people who don’t speak Finnish I simply describe it as a Finnish Rammstein. Harsh and persuasive vocals. Dictating and confident stage persona. Up for a show. Then musically they are not going to wild with their tempo, everything to enhance the words expressed, which are maybe not to be understood so much by yours truly, but certainly felt as the expressive way of bringing them does quite enough in that department. A short set for the guys, but some of the older material still comes by.

Little devil Agonoize was up next as we decided to stick to the main hall from now on as it was quite crowded already and reporting simply goes better when you do have a decent spot and dont have to bother the rest of the audience by passing by all the time. Self-exclaimed “Germany’s Most Extreme Electro Act” started with some older material like “Koprolalie” in the beginning of their set. When the temperatures started rising, the crowd had grown substantially and they were dancing intensively, they come up with more recent material as well. The last Agonoize release is from last year, “Revelation Six Six Sick” so it seems like people had time to know this already.
Altogether we saw a good show today, diverse and energetic.

The Norwegian Gothminister has released their new album only very recently and when our reporter Milla was enthusiastic about it there were definitely some expectations here. So the band leave no time go to waste, start right away with the new material and that seems to work well. The familiar show elements you usually see in a Gothminister show were certainly here as well but what we found the best was the eagerness of this band to have their material heard live. You could tell they were enjoying themselves greatly being back for an audience. Some older Gothminister classics were a not-to-be-missed part of the show, having “Monsters” as one of those tracks that brought many people to meet the band. Must be said their sound with the new songs included is standing on its own and about those expectations: met!

Headliner Centhron has released Fylgja this year and loaded with these new tracks they were ready to release them upon the Finnish audience. By now the place is pretty packed and the crowd is in a dancing mood, good that Centhron can comply with that. It does not take much for the Germans to set things in motion. As energetic as they are they bring also a lot of vehemence onto the floor. Centhron is not for the weak-hearted. Where we thought this band to be a bit more held back, digging deep into our memories since the last time we came them has been a while, the opposite seems true today. A powerful performance, a worthy headliner.

Some djs would continue after this set to take the party deep into the night and bring this edition of Hellsinki Industrial Festival to a glorious ending. 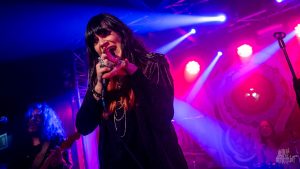 Rayland Baxter – If I Were A Butterfly