The Wave Gothic Treffen in Leipzig is more than just a festival. It is an international get-together of different bands, goths, punks, medieval lovers and people that live that way, of music lovers and many more.
The festival is not taking place on one huge ground with three or four stages, no. It takes place in the whole city of Leipzig in over 25 venues all over. That’s also the reason why you can use the public transportation for free when you are wearing a festival wristband. Going from A to B by car during the festival is more than just annoying and you can hardly find a parking lot. Due to the many venues and the tight time schedule I recommend everybody to check the time tables and schedules in advance and create a personal WGT schedule, you can’t be everywhere at once and you will have to decide where you would rather be. That’s how I always do it and with my schedule getting around is way easier. In the end I usually see even more than I actually planned.

This year I didn’t go to any of the many parties that you can go to every night, but I still had a blast. Simply walking around in the city and seeing many people in these gorgeous dresses and uniforms, with the gorgeous hair-do and make up, simply impressive. Also great to visit is the shopping hall at the Agra area and the medieval village where you can also eat original food and can see many things from that time, really interesting. Leipzig is a very historical city in Eastern Germany, very suitable for such an event.

Before I start telling you about the festival I will give you a short introduction about the venues I visited:

Kohlrabizirkus
Kohlrabizirkus are two cupola halls. The events are usually held in the North Hall of both. It is located in the south of Leipzig, in the district called Connewitz.

Agra
Agra is the old fair ground of Leipzig at the border of the city. This is where you can find the camping are, the “Heidnische Dorf” (medieval village where you might camp as well in medieval style) during the festival, as well as many food stands. Indoors you can find the huge shopping area, a café, the main stage and a little hall where some parties and discos are held. In front of the Agra halls the pretty dressed visitors walk up and down, photographers get their best shots of visitors there and many people chill in the nice weather we had this year. Behind the Agra halls are the backstage areas, all the trucks and other vehicles and the festival organization as well as the Red Cross and a mobile police station located.

Other special venues that I didn’t visit this time are: Auerbachs Keller, Moritzbastei, Völkerschlachtdenkmal and the Parkschloss.

When getting your festival wristband you also get a map with a schedule on the back. There it also states the addresses of each location as well as how to get there by public transportation. And now over to my review of the WGT 2008:
Since I couldn’t get Thursday off, and Friday only half of the day, I could not go before Friday noon and missed the opening of the festival, but that wasn’t so tragic.

FRIDAY:
After getting stuck in some traffic jams I finally arrived in Leipzig, a little later than planned though. First thing to do was getting my wristband and photo pass at the entrance of the Agra area where you also can get tickets if you don’t have one yet.

The second day, I woke up earlier than I usually would just to get breakfast in the hotel. Then I figured out how to get from A to B via public transportation. Since it is included in the wristband, why shouldn’t I use it? After breakfast and figuring out where and how to go I got dressed and done, ready to go and enter the next festival day. With sunglasses on I went to the tram station in the brightest sunshine. Perfect festival weather! 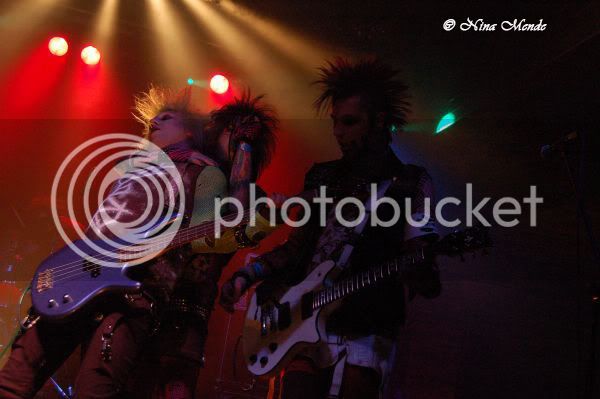 This would be my longest day of the festival with seven bands from 3 pm to almost 3 am. Twelve hours of concerts, music and bands.

The last festival day had now begun, somehow sad because it had been great so far. But festivals like this are also very exhausting. The time went by so quick and the last day wouldn’t be less exciting and great.

As the show was over many people left for the closing party that took place at the Moritzbastei.

It was a great festival and I am looking forward to the next year.