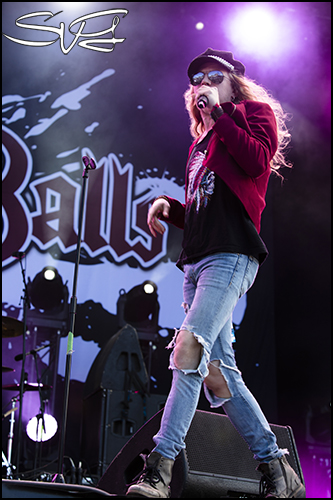 As the first band playing on Sunday you always have a bit of bad luck. Whetehr the hangover party crowd makes it inside within 10 minutes after doors are open is always to question, but Temple Balls had some dedicated people claiming up that front row. The guys are quite young, but eager to make an impression and seem to enjoy to think big on the large stage. Walking back and forth they are not limiting themselfs performance wise.

Musically you can hear the guys are young. It comes out well, but it lacks a bit of identity. Who are these guys? It’s too close to their references, without too much that says: Temple Balls. Something to work on for the boys, but hey, that mainstage of Tuska they can’t take away from you anymore. 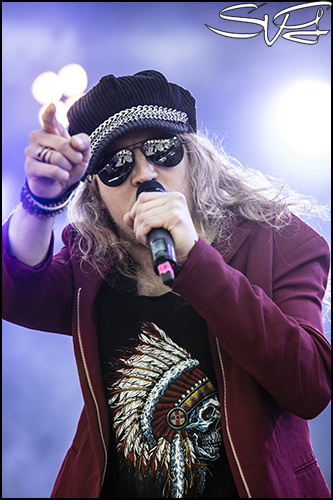 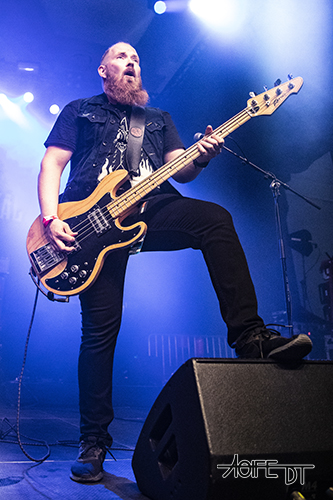 Black Royal opened the Inferno stage for the last day of Tuska to a bulky crowd, which in the beginning, I’ll admit, didn’t make much sense to me. It’s rare that the kick-off will garner too much attention, and while I had versed myself in their discography prior to their show – and liked it – I wasn’t expecting so much fervour from the early crowd initially.

Well, paint me wrong, because the more they played, the more I fell in love. The four-piece from Tampere have mastered the death-cum-sludge trickery with some undeniably catchy nuances to their signature style, and this was only expanded with their live presence. It is a difficult task in itself to be a band and set yourself apart from the masses, but hey, there’s a reason they earned their slot here at Tuska and they proved their deservedness. Put your neck brace on standby and go check out these infectious craftsmen. 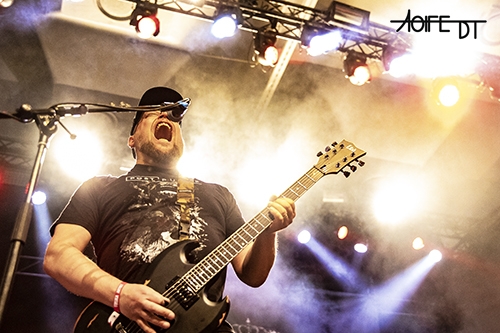 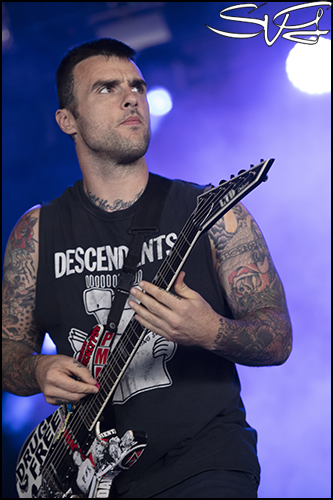 Stick To Your Guns… we got a warning that there was some crowdsurfing and moshing expected. Well ok, we are used to crowdsurfers landing on our heads and in our neck. We survived many years of Dynamo Metalfest (and we hopefully we’ll make it through next week’s edition as well), so no worries on that, except that there are usually not so many crowdsurfers at Tuska. Nor extreme moshpits.

And… that did not happen at all with this band. False alarm. Maybe it was too early for people to get hyped up by the American hardcore guys or simply not enough people knew their music well enough to get wild. Whatever it was, maybe it did not have to do with the guys. Their music seems fine, the show maybe a bit overjoyed, but they weren’t too bad. Somehow the click with the audience wasn’t there too much. Ah well, maybe next time? 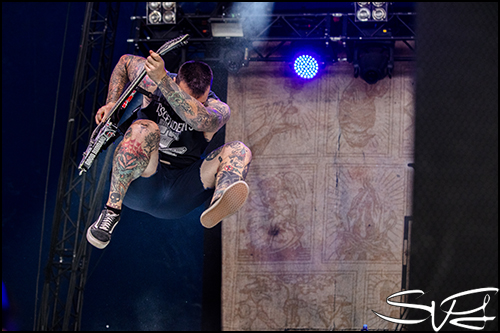 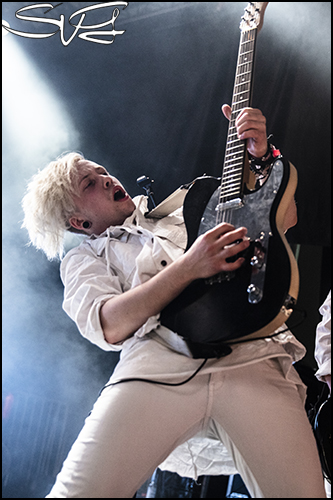 I was a bit upset after seeing the show of Blind Channel. The situation: A front row of youngsters and occassional some people a bit further away from the stage. But oh they can scream! Violent Pop is what they play. Ok… well the reason why I am upset is because this band does not belong at Tuska. And that is not their fault at all. They play a good piece of music. Lots of energy and hybrid ideas of genre blending. They are wild on the stage, they rage on, make connection with the fans and play like it will be their last day on this world ever. They really give all they have.

BUT… I get the bitter taste in the mouth that these guys were only placed here because some young fans would buy that expensive day ticket just for them and their 30 minutes of stage time. It seems like this band could gain so much more at a festival that has a more similar sound to them, a similar fanbase, because now they did not get the audience they deserve.
The eagerness of the band to play is admireable and why would one say no to Tuska? But somehow… this did not feel right. 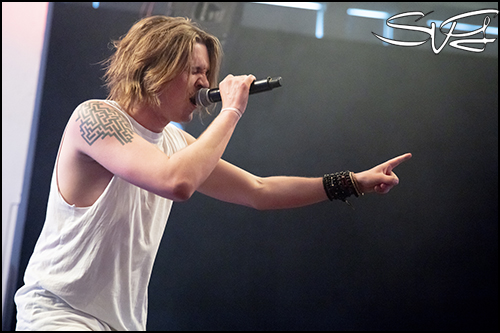 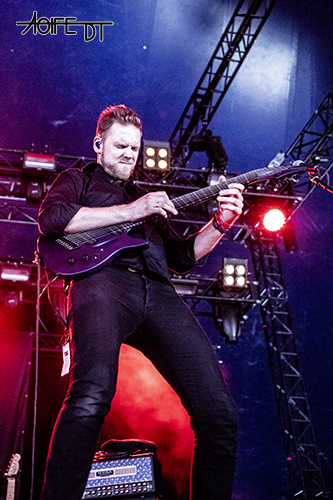 Acquiring nothing short of a cult following at this stage, Ihsahn completely dominated the Helsinki stage with attention spans unwaivered. Although I revelled in the performance of Sámr, the claim to “speed things up a bit” with Mass Darkness was celebrated by all. Master of atmosphere, the Norwegian-born living legend takes no prisoners and floats through his performance of solo mastery with ease and decorum. Frozen Lakes On Mars was one of the climaxes of course, and the humble Vegard Tveitan sailed past the screams of recognition and glided straight into his closing of A Grave Inversed.

A sight to behold, this avant-garde metal phenomenon is a being always welcome at Tuska and beyond, and given his undeniably unique stance on work and life to-date, always will be. The latest record Àmr is not even two months old yet, and I’m sure will be studied for further intricacies typical of this genius for months to come. 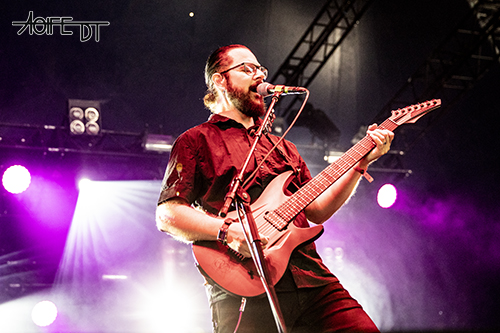 Grave Pleasures were closing the day at the clubstage. Previously known as Beastmilk, we saw them on this stage before and it was good to see them back here again. Their last album “Motherblood” has been released and while receiving lots of positive critics the band found its way to the audience as well. They were programmed up against Europe. While everyone was getting a grasp for these guys even though The Final Countdown does not come before the very end, which give you plenty time to see Grave Pleasures first, it was maybe not comepletly full in this hall.

It did not seem to bother the guys, the people who came to see them were much appreciative and that makes sense, because they have a professional appearance, songs wisely chosen and putting the stress on the right moments, never overdoing it. That art of modesty fits the band like a second skin. We were happy with the choice made to see these guys instead of them Swedes… because this doomish punk sound simply holds more ground. 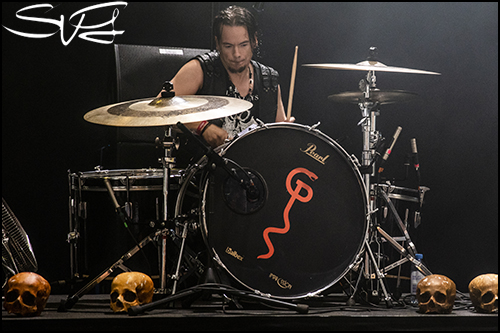 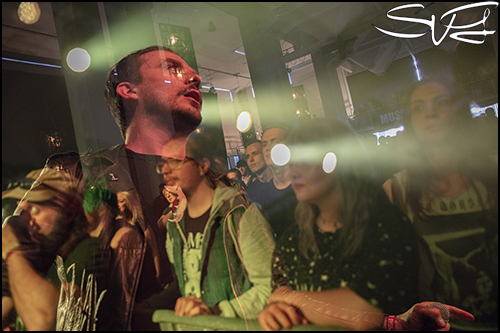 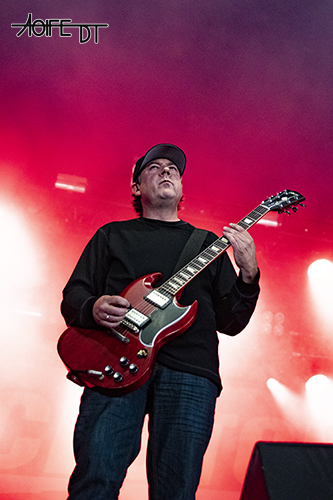 With X-Ray Visions even now still pounding through my veins from their opening song, Clutch are one of those good ol’ reliables that will always put a creak in your neck and a smile on your face. Channelling their vast selection of hard/alternative/psychedelic/southern/stoner rock, they paraded around the Helsinki stage with vigour and valour, relentlessly entertaining the expectant punters. Rising to the task of closing the stage for the festival, they induced a serious hit of vitality, especially via the likes of Hot Bottom Feeder and The Mob Goes Wild… Aptly enough!

Finishing with the previously unplanned DC Sound Attack, the Maryland rockers casted some celebratory fun on to the last day and lifted the spirits of those forlorn about the event’s closing. Looking forward to the promised release of their twelfth studio album this coming September, we can surely see more of their promotion in 2019, and a big ‘hell yeah’ to that! 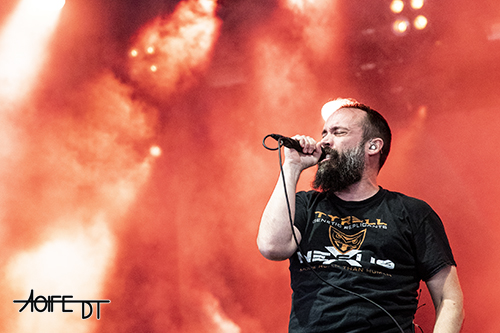 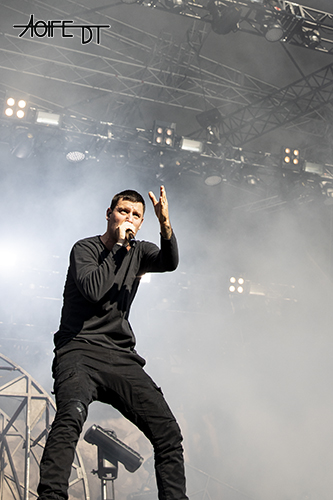 Metalcore Aussies Parkway Drive were gifted the revered headline spot on the main stage of Tuska’s final day, closing the curtains on a jam-packed weekend with a bit of a curve ball. They may not be everyone’s cup of tea, but the five-piece extravaganza have paved their way into metal notoriety after years of defying gravity with surprising yet rightful success, despite some hurdles along the way.

A massive reception adorned them at the sun-laden stage, and they sweated their way through an extreme set of energy, power and fitting exuberance that they are known for. Complete with a revolving drum set that might reference my ‘defying gravity’ statement suitably, they included an encore rarely seen at Tuska which consisted of tracks Absolute Power and Bottom Feeder. I would never have seen these guys off my own bat, but they certainly provided a great experience that was typical of a great Tuska headliner, and I’m glad to have seen what they have to offer. 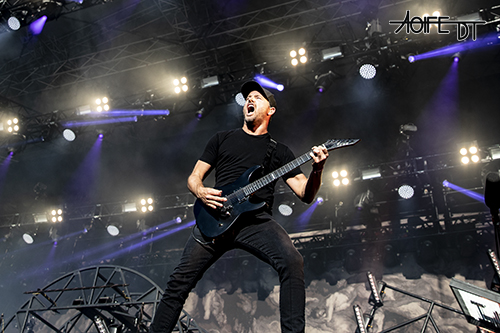 Altogether we had a great time at Tuska once again. Some bands won our hearts, others we weren’t sure off, but the great ambiance and family feeling at Tuska makes every single minute worth it. See you next year!