Swedish gothic death metallers Tribulation visited Istanbul for the first time ever. The show took place on a Sunday in the most popular part of the Asian continent of Istanbul, Kadiköy. The concert hall was KadıköySahne which is a small and always packed venue. I was in the second row with my metalhead friend who was fond of Swedish metal scene, I was somehow ignorant of the whole Swedish metal thing except for a couple of bands I like so she was also informing me with valuable knowledge while we were waiting for the band to come out. We were so close to touch the small stage so we thought we were absolutely in for a treat! Alternative rock and metal DJ and a local music journalist Caglan Tekil played his dj-set as warm-up for the metalheads who packed the small venue.

Their intro to the stage was a French song probably by Edith Piaf. Very eclectic, indeed! That’s why I love metal in all seriousness. They started off the show with songs from the latest album, “Down Below”. Those openers definitely set things on fire for the rest of their show. Then, they back and forth played the songs from “The Formulas of Death” and “The Children of the Night”. The way they played the songs on stage precisely and with vigour was very appreciated by the crowd. What I also realized in the crowd, I might not be entirely on point but the first two rows were just gothic female audience and from the third row on, old skool male metalheads formed the prominent amount of the crowd. Maybe I just did not come across any black-metallers.

I would like to talk about the most graceful and savage ballet moves of the guitarist and the artsy-mind of Tribulation; Jonathan Hultén and his guitar-playing. 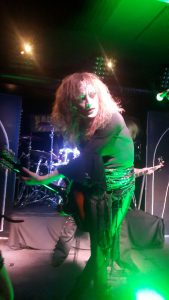 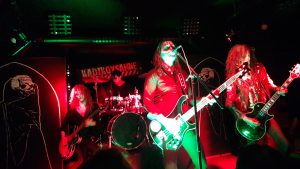 His moves definitely project and display his artistic side on the stage which he also illustrates his skills on the artwork of their albums and the lyrics, his gruesome stage make-up that seems out of a horror movie. In their music videos, it’s also clear that they get inspired from classical music. Every member of the band is a talented musician and with Hulten’s artsy approach complements the whole picture of Tribulation. 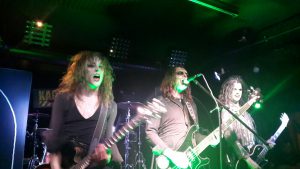 There was no encore but the crowd left the venue with contentment and how do I know this? After the band got off the stage “Across the Universe” by The Beatles was playing as the outro and the crowd was singing along to it out loud in unison. I thank Tribulation and the organizers who made this great experience happen for us.