The second day of Hell over Hammaburg featured a variety of bands in two different venues; the bigger venue Markthalle as well as the smaller venue Marx. So unlike the first day, we had to make choices between two bands whose schedules overlapped.

Our day started relatively early as we wanted to catch the first act at the small venue. Maggot Heart is a name that some of you may have heard of… if you know certain bands and projects from the Swedish metal scene. The act is a solo project of the Swedish musician Linnéa Olsson (ex-Beastmilk, ex-The Oath, Sonic Ritual). She released her debut EP “City Girls” a while ago which was recorded together with Uno Bruniusson (Death Alley, Procession, ex-In Solitude) and Gottfrid Åhman (No Future, Reveal, ex-In Solitude). The music is a fine mix of post-punk and “negative rock’n’roll” where she pours out her anger. Even though we saw Maggot Heart live a while ago, we were beyond excited this time to see her at HoH. Considering they were the first band of the festival, we personally didn’t expect so many people but the venue was packed with fans eagerly waiting for the band. 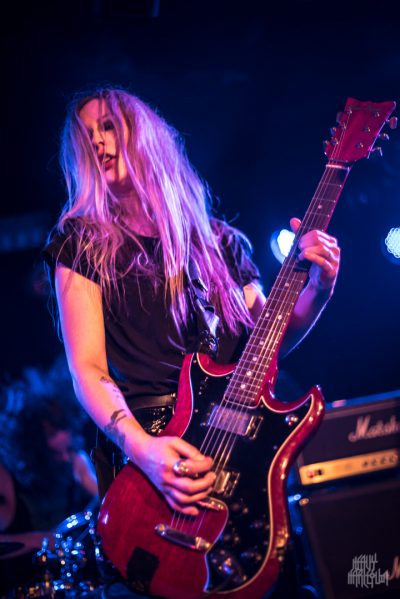 Linnéa and her band mates brought  us the full rock’n’roll and punk attitude with their set and conquered the stage. Since the band had a short set, this fit perfectly for the EP as the fans got to hear all the songs from the release. The band made the perfect finish with the cover “Final Solution” (originally released by Pere Ubu). Even though the set was short, the fans and the band were on fire; people were cheering along, applauding and showing their appreciation for the band and especially for Linnéa . It was obvious that they all missed her and so she said her thank you’s to the audience many times. Our other highlight was the talented drummer Uno Bruniusson rocking it with full dedication! I have seen him 1-2 times and this was his peak performance for sure! Apart from this, the whole band had the perfect chemistry and it was surely amazing to see her on stage again. Maggot Heart was quite the nice contrast in a heavy/black metal festival like this but I am sure they were one of the highlights of many people. 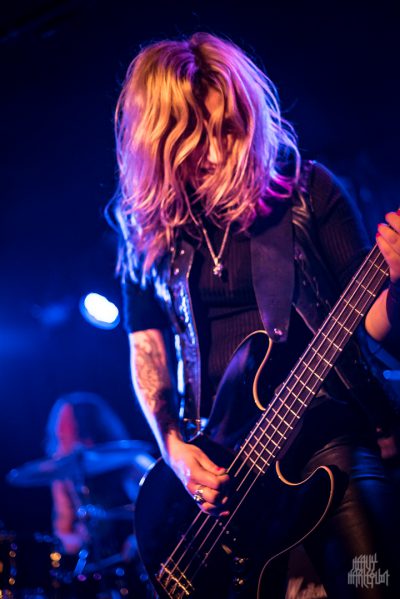 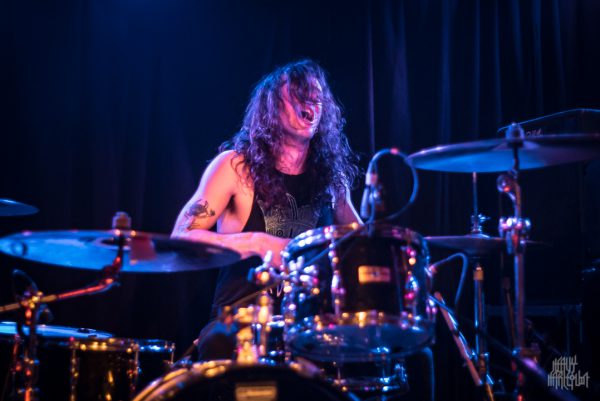 We had to take a break so we missed a couple of bands in between but we made it in time for the death/doom metal act The Fog.  This German act has been formed in 2013 and have two releases so far. We have never seen them live before so we were curious about their performance. 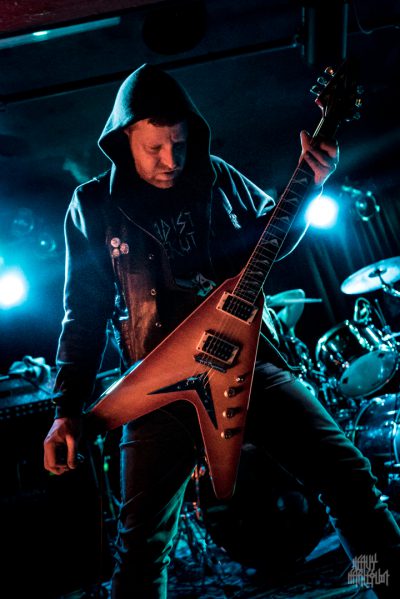 Throughout the set, the band had this calm and ‘doomy’ attitude which went well with their music and for those doom metal fans in the audience. The atmosphere they delivered was raw and dark and so the audience seemed to enjoy this a lot. The show could have been a lot better without the sound problems as I got the feeling that all I could hear was the bass. Despite these problems, the band managed to deliver a nice performance and brought us some fine death/doom metal. 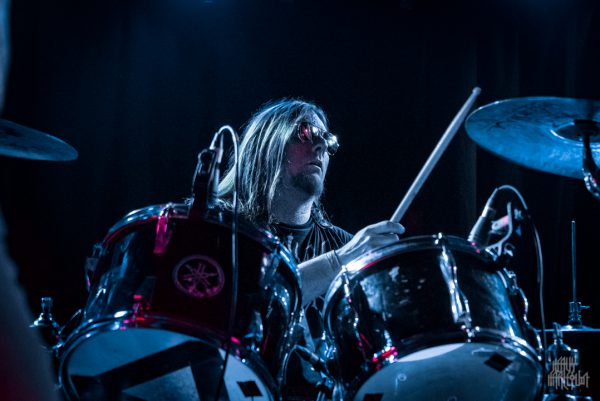 We decided to stick around at the smaller venue a bit more for the German epic/doom metal act Old Mother Hell. The venue was crowded as before so it got us curious about how the band was gonna be.

From the beginning of the set, the band gave signs of a dynamic and powerful show… just as what one would expect from them. From the vocals to the drums, everything was in perfect harmony and the band delivered a great mix of epic and heavy metal. Some highlights such “Mountain” and “Narcotic Overflow” made the crowd go crazy and we could see headbangers enjoying the show fully. The band definitely poured their energy 100% and this created a great synergy between them and the audience. 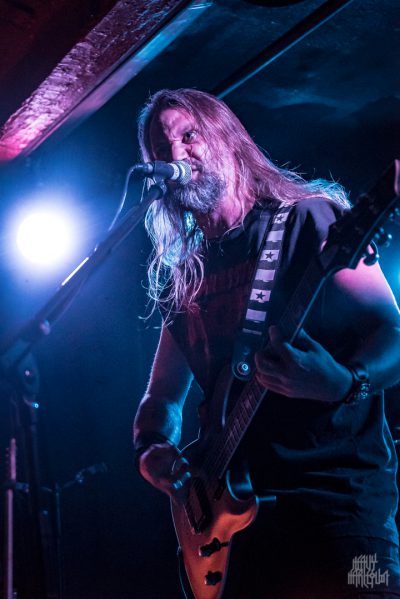 One thing that amazed me was also their interaction with the audience; the vocalist joked about not having his beer (and he was offered a bottle of water afterwards) and had some entertaining moments with the audience. “Without you, we wouldn’t be here today” were the bassist’s words so the band was excited and maybe also surprised at the appreciation they got. It wasn’t only their bombastic and sincere performance as well as their attitude but the package as a whole warmed everyone’s hearts and some sincere headbanging could be seen. With this energetic show, they became one of our highlights for today’s line-up. 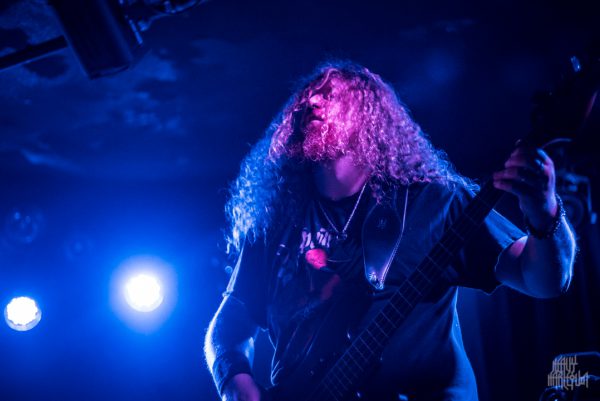 Moving on to the big venue… England’s Solstice is quite known when it comes to some epic doom metal. They have been around since 1990 so they were one of the big acts of the festival and I could see that the venue was pretty full; especially compared to Day 1, the fans this time were more eager and I could feel the excitement stronger this time. 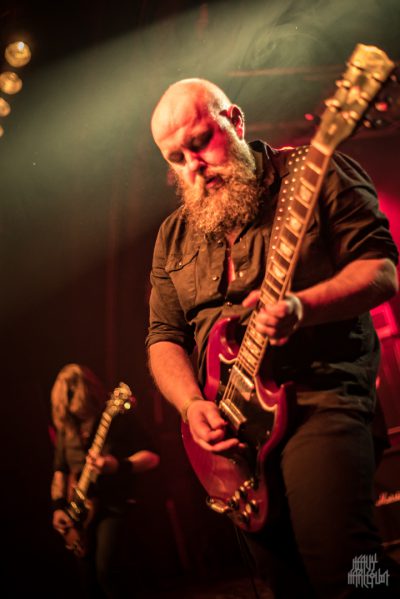 With the start of their set, the band was welcomed with cheers and ‘fuck yeah’s. It turns out that the band missed the Hamburg audience as they mentioned that it had been 3 years since they last played in Hamburg.  Despite having had some technical issues in the middle of the set, the band managed to deliver an epic performance and warmed the venue! I was especially amazed at how dedicated the audience was this time! With their colorful setlist, the band delivered the epic doom metal performance to the fans. 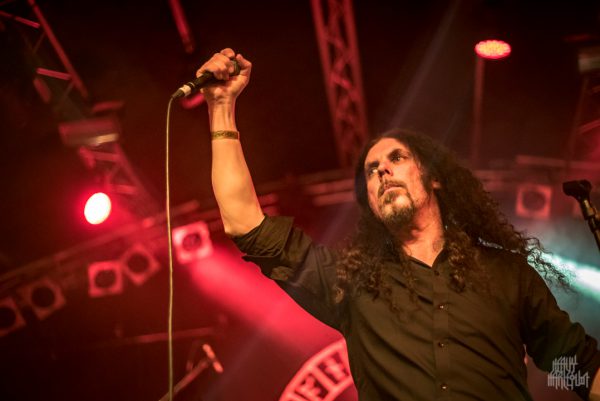 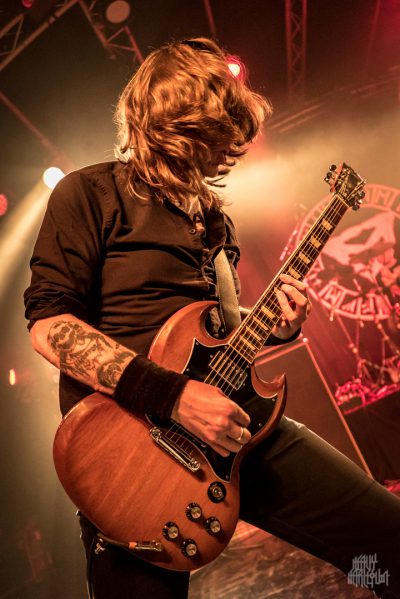 A nice contrast after some epic doom metal… Germany’s Venenum was next. This death metal act has been active since 2008 and their latest full-length “Trance of Death” has been out last year. I had the chance to see the band last year and they blew my mind. That’s why I was excited to see them this year in a bigger venue and with a more eager crowd! 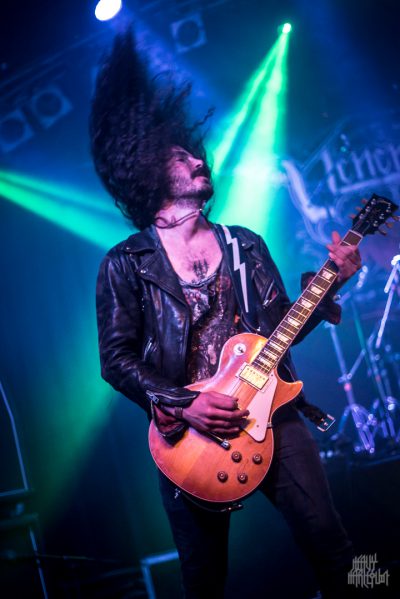 Although I could see that many fans were waiting for the headliner Atlantean Kodex (and some fans were going back and forth between this big venue and the small venue where Visigoth was playing), everybody gave in to the dark atmosphere as soon as the band started their set. This was especially perfect for the fans of death metal but also for the fans of atmospheric dark ‘stuff’ in general.  The darkness in their sound made the band one of the highlights for us. Especially the vocals and the drums caught my attention the most; definitely brutal and bombastic! Considering the great sound in the location, the band managed to reflect the vision of their music quite well. The set itself was a fine mix of fast classic death metal songs but also some down-tempo atmospheric songs which made the setlist a bit versatile. All in all, nothing to complain about… An impressive show! 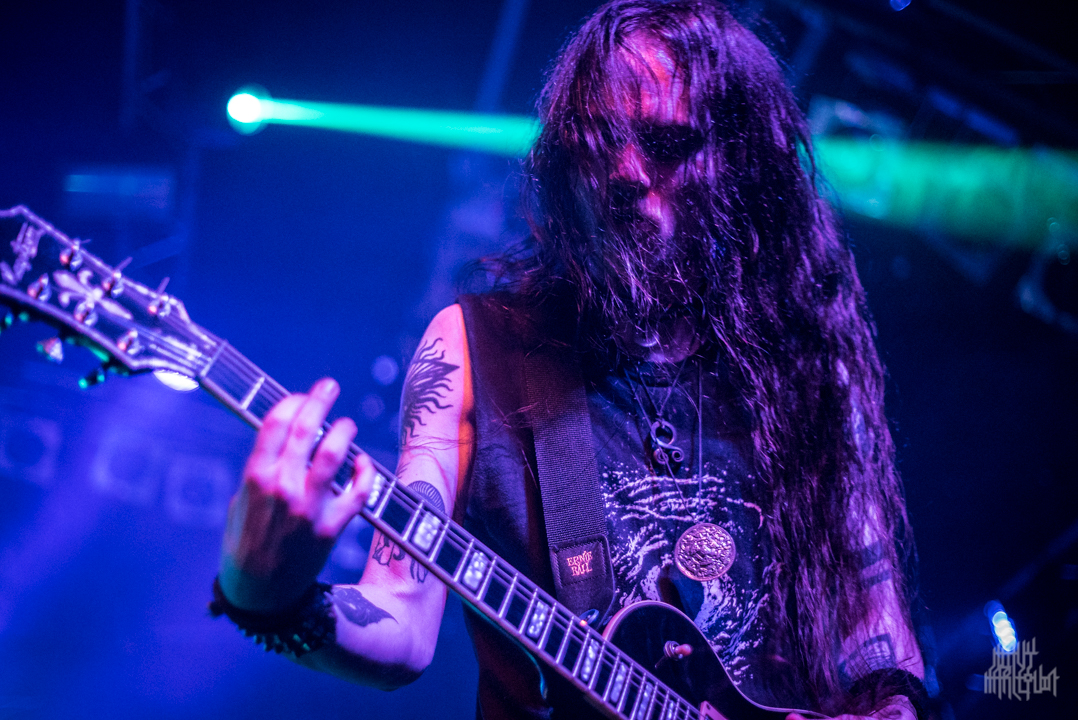 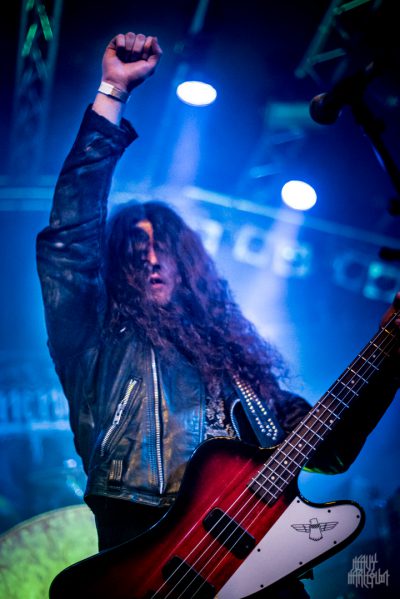 Atlantean Kodex…. The best for the last for many visitors of Hell over Hammaburg. With various releases and two full-lengths, the German epic heavy/doom metal band has been going strong since 2005. The big venue got even more crowded and I could see many fans with their Atlantean Kodex shirts. 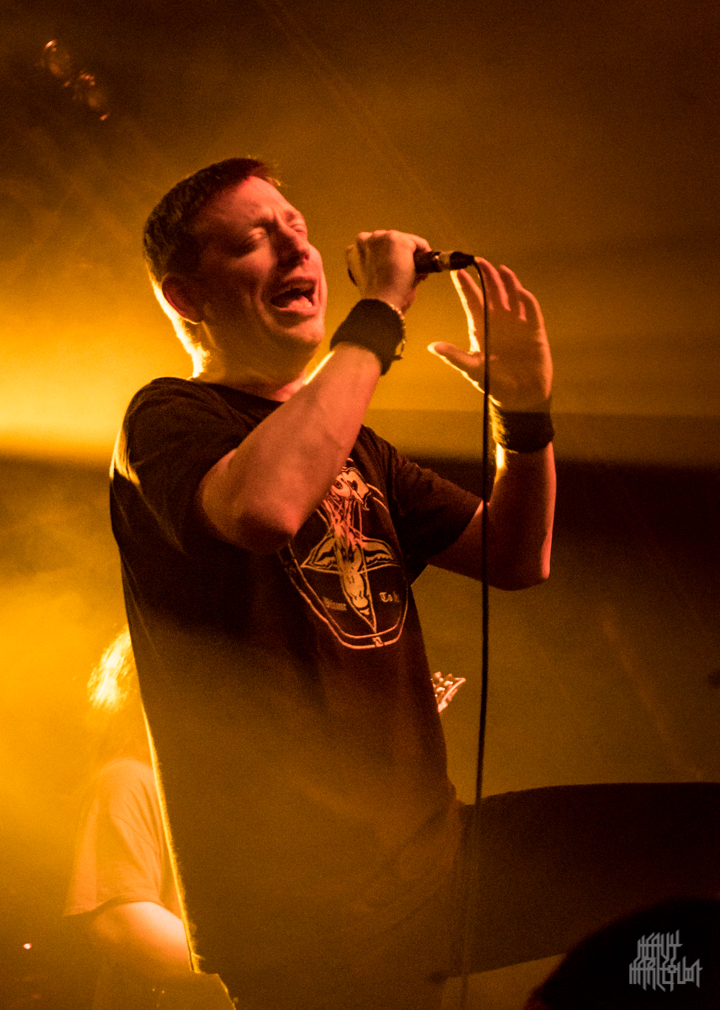 The band started their set in a slow pace but with each sound, the band’s energy got more epic and dynamic. One thing I really liked was the vocalist’s interaction with the audience and his energy! “We will only play when everyone is drunk. That’s why we chose to play as the last act” was his nice and funny words! So he made sure everyone had their beers and everyone was having an epic time. I gotta say their music wasn’t my style at all so maybe I was personally not so hyped with their set but I just relaxed and observed the never-ending hype in the audience. 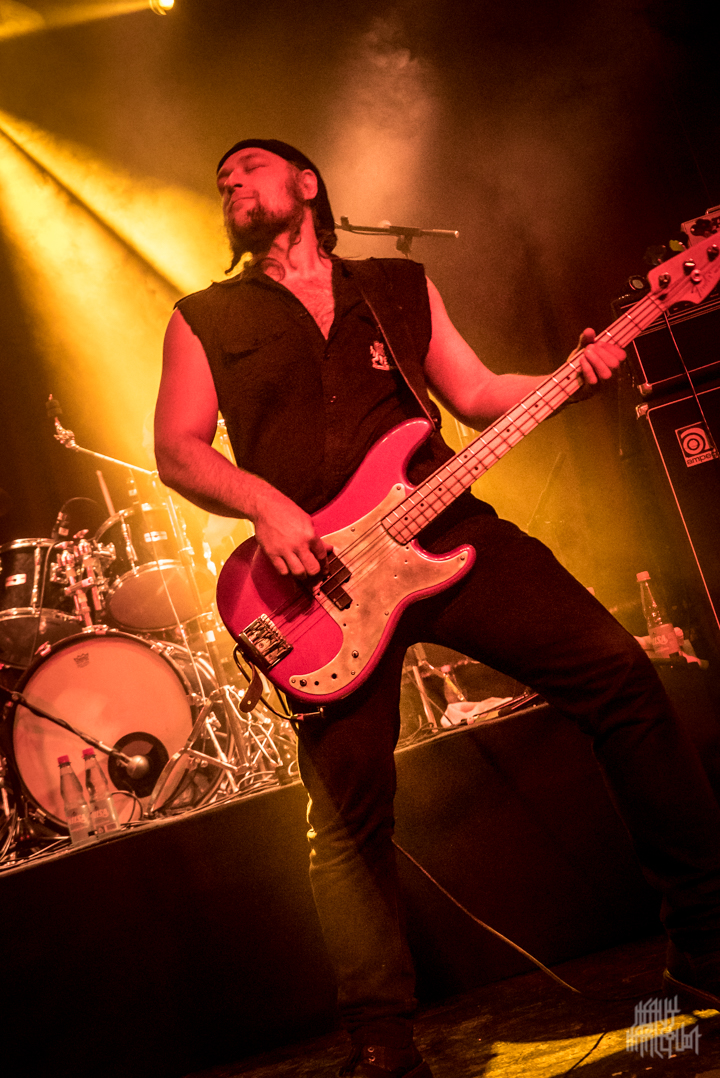 As a person who saw the band for the first time, I wasn’t so familiar with their set but their faster songs got me a bit more interested than the slower ones. The fans next to me and behind me were singing along and headbanging… so Atlantean Kodex were definitely the peak point of Day 2 or even of the festival in general. They were maybe the only act that got everyone cheering and headbanging. The perfect finish for Hell over Hammaburg! 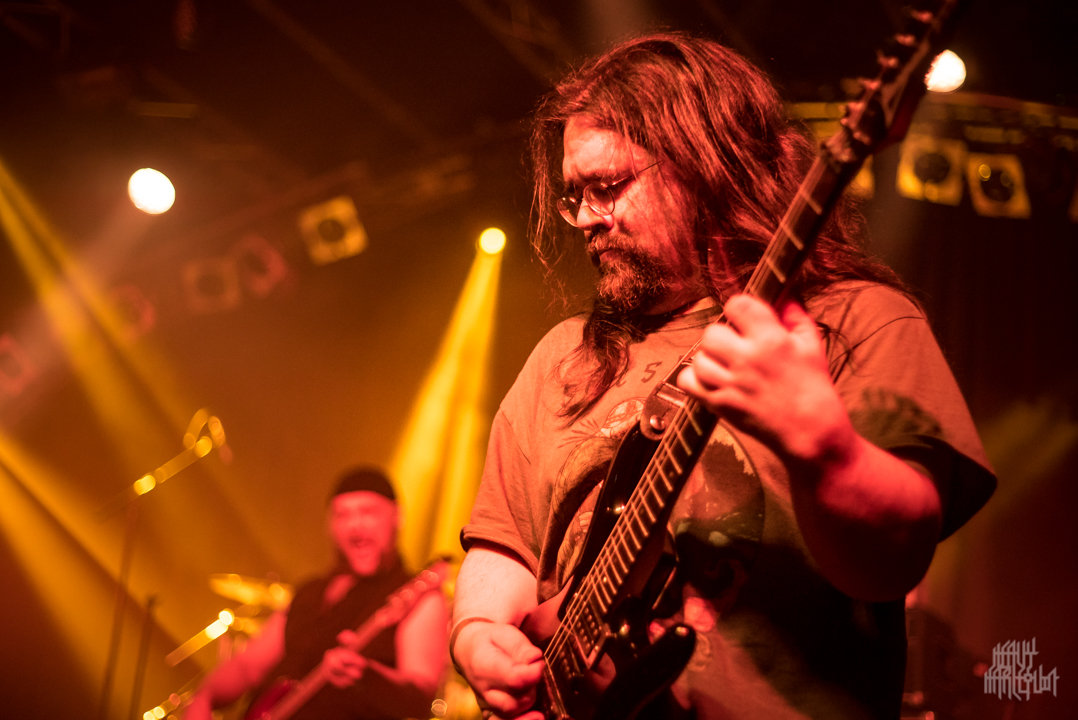 Highlights of Day 2? Our personal highlights were surprisingly not the headliner or the big acts but the more unknown acts: Maggot Heart, Old Mother Hell and Venenum. The crowd’s highlights were definitely Venenum and Atlantean Kodex though. Although we missed Visigoth, I heard (from here and there ;)) that they were also one of the highlights… Well, it was obvious; the small venue was very crowded!

All in all, Hell over Hammaburg was a colorful festival with many genres; there was a bit of everything for everyone! From the organisation to the audience (especially during the second day), it was an eargasm in many ways! Thanks to the bands and to the organizers for bringing hell over Hamburg!