[schema type=”person” name=”Hammerfall” description=”Interview with: Joacim and Pontus; By: Sabine van Gameren” ]Lucky as we are we get to speak to Hammerfall about their brand new album “Built To Last”. And this album, number ten in line for them, has plenty to talk about.

Soon after we start talking about this release it becomes clear that this band likes it all to be organized and going according to plan. They make sure that all the songs are written before they enter the studio.
“Some bands have just ideas for songs and then waste so much time and money just sitting there trying different things and nothing really happens. We are very German in that sense. We want order“, Pontus explains.
Of course that does not mean that all is done into the details but the basis is there. Pontus continues: “The framework is done, but all the spices and the cool stuff comes along. It was a bit tricky to write, it is our tenth album we have done over a hundred songs and you need to be creative and give something unique. Which is not the easiest thing, but we manage somehow”.

Ten albums have been out indeed, plenty of songs they have done and of course a certain way of working grew accustomed. It’s not written in stone but there is not much radicially different. “We have a really good recipe now, how we work. On ‘(r)Evolution’ we brought back Fredrik, our producer, but still we know what is good for us and what works for us” they guy tell us about it.
This is not only in recording but also a thing in general. Joacim tells us that they have no management and do all themselves. “You need to stay in control otherwise it is so easy to get out of hand” he tells.
And luckily all went smooth. “Sometimes you bump into small problems, but this time the flow was amazing. It is good that you set yourself a certain amount of pressure in the studio. The worst thing that can happen is having unlimited time. Then nothing is going to happen”Joacim tells us.
Looking at the album we thought the song “Hammers High” stood out and the guys seem to get that right away. No need to explain, “It’s SO much Hammerfall” says Pontus.
The guys explain: “When it first came out as a demo, it was there. When we started to record it, it just grew and grew and the melodic touch that Hammerfall has in all their songs is just right there”.
That melodic thing will make it a great one for live shows we remark and the guys are agreeing with that. “We probably have to play it live every show until the end of our career” they tell us laughing.
Well, that makes us curious on how they decide on what songs to play. Obviously the latest release will be represented but how do they decide on the others?
Joacim has some good logic for that. “Every show should be like the greatest hits. Some songs of every album, maybe then some songs you may not expect and of course you need to play the hits. If you only see Hammerfall once in a lifetime, it should be a happy one” 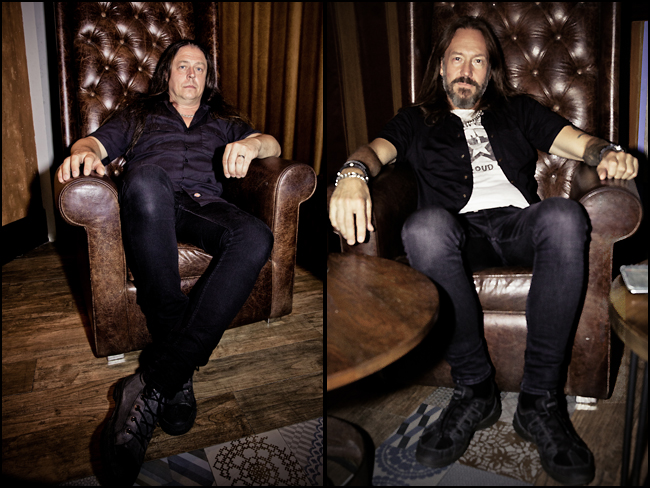 Another one of the songs that came to notice while listening it was “The Stars of Home”. Pontus has much to share about it, as he did not contribute much to the other songs during the writing period. Some personal issues. “Unfortunately my father passed away during the writing period so I missed out of writing the songs. Oskar kept calling me and tell me I have to do something. I had some ideas and then this song came out so fast. It was there and I don’t actually know the meaning of the lyrics, but that doesn’t really matter to me, the music is there. It was the help from Oskar that helped me go through after the sad things that happened. It is a little bit different“
So for Pontus this one represents a little more. Then they tell us that they thought it would be the last one on the album. (But it is not…)
“It has that kind of feel . It leaves you for something new, and whatever that is, comes on the next album.”
And that what we leave them with. The band has plenty of shows planned ahead, so we will enjoy these first before we can wait for whatever it is that comes on that next album, but sure they made us curious!