Let there be metal! Well, that could be the motto of the Saturday at Wave Gotik Treffen. This day we spent at Kohlrabizirkus from opening until closing, because there were some pretty amazing bands up on stage that we want to tell you about.

The first band here at Kohlrabizirkus was Stahlmann. Many people had come out so early to see them perform.

Stahlmann is a German band that formed in 2008 in Göttingen, Germany. It is in the genre of Neue Deutsche Härte. Martin Soer, the vocalist of the band, met Alexander Scharfe, the guitarist, and both soon realized that they like the same kind of music, Neue Deutsche Härte. Later that year, they started the band, Stahlmann, and started writing their own songs.

Long story short, these guys were playing here at WGT tonight. Opening the venue. As mentioned before, the venue was filling up quickly. Many of the people that were rushing in, were eager to see the band perform.

As the band was entering the stage, the cheering was a little restrained. But the band gave everything to wake up the energy within everyone in the audience. And they succeeded. The audience soon warmed up, cheered, danced and sang along to the music.

Stahlmann was playing old and new songs, and the singer was telling a short story about each song in between. One story stood out: When the singer explained why they changed a song and announcement for it. The reason was their drummer. He now is father to a new born daughter. So the band decided to dedicate “Engel Der Dunkelheit” to his daughter. A beautiful reason.

Stahlmann was playing for about one hour before they left the stage. But there were more great bands to come. So no need to be sad.

Up next was the female fronted metal band Xandria.

Xandria is a German symphonic metal band, founded by Marco Heubaum in 1997. The band was restarted with a different line-up in 1999. Marco stepped down from the role of vocalist and was joined by local musician Roland Krueger on bass. In 2000, they recorded one demo that was released on the internet and after its release current drummer Gerit Lamm joined the band. The female vocalist that recorded the demo left the band to follow other plans and was replaced by Lisa Schaphaus. At the same time, writing of the debut album started.

More and more people entered the venue, just in time for the show of Xandria. Xandria entered the stage and the audience was going along right away. The band was playing old and new songs throughout their set. The vocals varied between opera vocals and rock vocals. But each time they fit in with the arrangements perfectly well. The arrangements were wandering between metal and rock, with a strong medieval touch. The audience loved it.

Since the singer was talking to the audience between the songs, telling them stories, the audience was so excited that they did go along even more. The cheering after each song was immense.

Xandria was playing for a little over one hour before it was time for the next band. Right as they were about to leave the stage, the band announced that it was the singer’s birthday so the audience cheered loudly one last time.

A Norwegian band called In The Woods… was up next.

In the Woods… is a Norwegian Avant-garde Metal / Alternative Metal / Experimental Metal / Progressive Metal band from Kristiansand, formed in 1992 when they had more Black Metal influence. The band released a total of four studio albums, three singles, one compilation album and one live album throughout its initial existence. The band disbanded in 2000 and reformed in 2014.

And these long haired progressive metal boys were entering the stage next. The venue was not as crowded as before anymore, but the audience had changed entirely and more people were rushing in.

The music of In The Woods… was a one of a kind. The metal they played was having its own charm and pace. Very interesting to watch and listen. Especially because the singer had amazing clean vocals during the verses and some deeply growled vocals during some choruses and parts.

The band members themselves seemed more shy and introverted, so they did not interact a whole lot with the audience. Which was ok. Because this way, everyone could fully focus on the music and sink into the world, In The Woods… created.

It sure was an interesting show that lasted for a little over one hour.

Moving on to extreme black metal: Rotting Christ from Greece was up next.
Rotting Christ is a Greek extreme metal band formed in 1987. They are noted for being one of the first black metal bands within this region, as well as a premier act within the European underground metal scene. They are also responsible for creating the signature Greek black metal sound prevalent in the early 1990s.

So these guys were performing now. And that surprisingly amazing! Each band member had a strong presence on stage, knowing how to rock the audience and get them going along. The rough riffs on the guitars and the heavy kicking on the drums caused the audience to go crazy on the dance floor. The vocals were partially sung and growled. The rhythms got everybody to go along for sure.

The singer of Rotting Christ was talking to the audience in between the songs, animating them to go along even more. They loved it. The band animated their fans to start a circle pit and shouted along with their fists and horns up in the air.

Rotting Christ played for a little over one hour. Then they had to leave, because it was time for the last band of the evening to enter the stage.

Closing the venue tonight was the Finnish metal band Amorphis.

Amorphis is a Finnish heavy metal band founded by Jan Rechberger, Tomi Koivusaari, and Esa Holopainen in 1990. Initially, the band was a death metal act, but on later albums they evolved into playing other genres, including heavy metal, progressive metal, and folk metal. They frequently use the Kalevala, the Epic Poem of Finland, as a source for their lyrics.

Amorphis entered the stage with a lot of cheering from the audience. The band entered the stage with their original bass player. So the band ended up playing quite some old songs. The audience loved it. The strong metal riffs were combined with catchy melodies. Fans rocked along, banging their heads, raising their fists into the sky and sang along to the tunes. The rhythm and pace changes between the songs kept the movement of the audience going.

The singer talked a lot to the audience between the songs. Telling them stories about the songs they were about to play and thanking them for coming out tonight.

Amorphis played for almost ninety minutes. It was an amazing show by an amazing band. And the perfect band to end the night with. 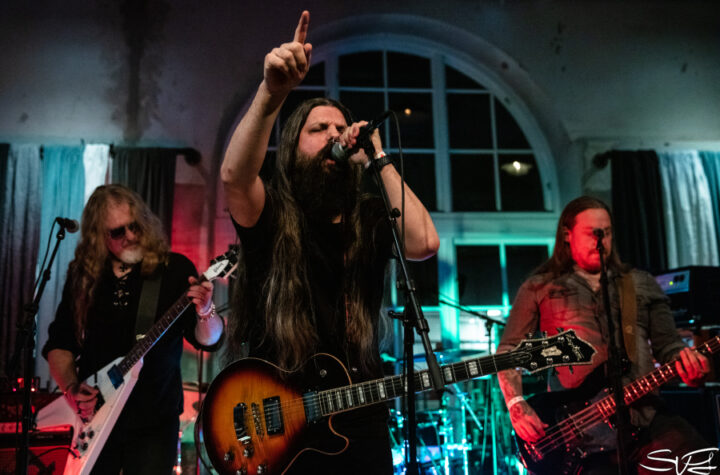