Valkeat is a folk metal band, which is just getting ready to release their debut album 20th of January. Their music is a combination of many styles that goes beyond the limits of metal, but what makes them most intresting is that they utilize the Finnish national instrument: kantele. This is their story.

R: Let’s begin with an easy one, how are you?

M: Doing fine, we have a music video coming up and I’m quite eagerly antici 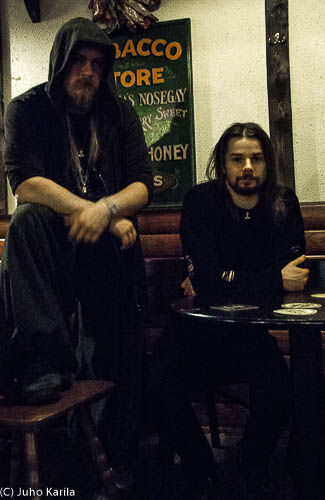 pating to get it out. This is the first music video we’ve ever done, and I’m acting on it etc. So it’s quite intresting to see people’s reactions.

E: Yeah, been keeping busy. It’s nice now when I can just practise while waiting for the release and reactions.

M: We’ve had this idea to start playing modern heavy music with a kantele, which is the national instument of Finland.

E: I bought that kantele 8 years ago with the thought that it’d be cool to do modern set with one. It took a while learning a new instrument at guitarist/pianist basis. I had played kantele when I was 3 but 5-string one is a different thing than 15-string, or a concert-kantele, which I also got to play for the album.

R: Okay, how the rest of the group came along then?

R: We talked a bit about genre boundaries and how they’re vague nowadays, how would you describe your music?

M: I think modernized folk metal but with the difference that folk metal has became nowadays quite a…

E: It has gained dogmatic characteristics, that it has to be just something specific. We wanted to bring in the folk vibes but on our own way.

M: So if folk metal has formed into something, we wanted to go away from it and think it all over again, in our own way. Finland’s biggest music magazine Soundi ended up calling our music a “kantele metal revolution” and I’m more than fine with being kantele metal!

E: Yeah, even if some have used the kantele in traditional ways to color the athmosphere, we started doing it in a different way.

M: With a distorted electric kantele. It could be summarized by looking at the Finnish history: thousands of years ago Väinämöinen built a kantele from the jawbone of a pike and in 2014 came Valkeat and plugged it into a Marshall.

R: What about the genre boundaries then, have they become more indistinct or what?

E: Well, of course you’d hope it would be like that because they feel so limiting. That we’ve talked with Miikka a lot that it feels silly to find the target demographic within genres for Facebook ads or something, because we can’t be the only ones to listen to everything, can we…?

M: Well, I think it’s stupid to limit yourself only with genres. I think they’re meant only for helping people finding the music they want to listen to.

I’ve never thought that ”we can’t do this because it’s not metal anymore” or anything like it.

R: Then… How about the sources of inspiration & what has inspired you?

M: Ensiferum, Turisas, Summoning, Nightwish and Moonsorrow were the bands to found my own musical basis where I come from. In later life I’ve completely fell in love with bands like Sólstafir and Kvelertak.

E: I got into music by listening to everything my parents have listened to, huge piles of Latin American and prog.

What got me really excited was Jethro Tull, that I needed to play everytime before going to school on 7th grade. It had those folk vibes as well but then I’ve gone constantly into more and more to folkish direction.

R: Okiedokie, then I think it’s time to set the word free for Valkeat, here you go!

M: If you like our music, show it to all the people and keep as loud fuss as possible about it so everyone will get to know. So then we’ll probably get to play it to you someday, good music won’t spread unless you talk around about it.

E: Album is coming out in January, so welcome to admire those deep mystic sounds you’ve never heard before. Not from a kantele and not from anything else as well, so here we have an instrument that can be used to make things you just haven’t even thought of. Fuck, we’re still talking about new stuff if we did ten albums, there would still be new stuff.

M: I can tell that at this point, Väinämöinen would be proud. 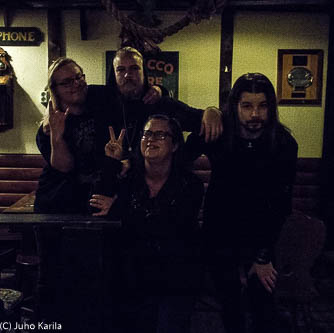